Posted on September 19, 2018 in Wednesday's Example of Media Bias 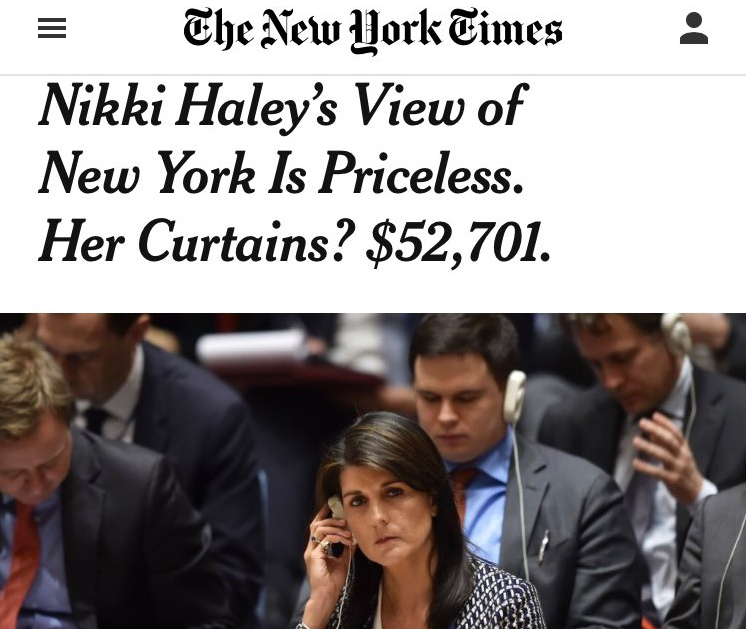 Only at the end of the article did the NY Times mention that the plans to buy the curtains were made in 2016, by the Obama State Department.

From the NY Post editorial board, Sept. 14:
Hours after posting an online smear of [Trump appointed] UN Ambassador Nikki Haley with the article “Nikki Haley’s View of New York is Priceless. Her Curtains? $52,701,” The New York Times corrected their article  to make it clear she had nothing to do with the decision to spend the $52,000 on mechanized curtains in her official New York residence. Hours of criticism had left [editors] no other choice.

It took hours for criticism from the likes of CNN’s Jake Tapper (on Twitter) to move the Times to acknowledge key facts – the most important being:

So, as the Times’ correction notes, “The article should not have focused on Ms. Haley, nor should a picture of her have been used.”

All that’s still missing is an apology at least as public as the original smear.

The correction noted the initial story, which used Ambassador Nikki Haley’s name in the headline and carried a photo of her, “created an unfair impression about who was responsible” for the curtains because the decision was made by the Obama administration.

That crucial fact was in the initial story — yet the reporter and editors involved buried it and made it sound insignificant, as if Haley was guilty of a scandal.

Why did they shape the story that way? If the Times is serious about setting the record straight, it will find the answer and publish it.

My suspicion is that those involved saw the curtains as news only because the story would fit the Times’ anti-Trump agenda. The facts, headline and photo were arranged to serve that narrative.

The story, then, is a classic example of what happens when a newspaper becomes a partisan tool. Prejudice is baked into nearly every decision and the entire staff is expected to follow the party line.  Fixing that will take more than a single correction.

In a 2nd instance of the media giving viewers a false impression, the New York Post reports:

A TV weatherman appeared to be caught faking his battle against gale-force winds during Hurricane Florence.

The Weather Channel’s Mike Seidel was seemingly battling to stay upright as he filmed a piece in North Carolina — only for two pedestrians to calmly stroll past in the background.

Speaking as he fought to stay in shot, he asserted: “This is about as nasty as it’s been.”

But viewers spotted the pair walking down a road behind him — seemingly unaffected by the wind.

You don’t expect it out of The Weather Channel, which fancies itself the no-nonsense authority on all things weather.

The most incriminating part has been The Weather Channel’s reaction. Instead of classifying Seidel’s act as an unacceptable goof that was beneath station standards, it released a statement defending its intrepid reporter.

“It’s important to note that the two individuals in the background are walking on concrete, and Mike Seidel is trying to maintain his footing on wet grass, after reporting on-air until 1:00 a.m. ET this morning and is undoubtedly exhausted.”

1. What is the problem with issuing a correction of a news story?

2. What is the problem with (especially the Weather Channel) misleading viewers on the severity of a storm?

1. The problem with issuing a correction of a news story is that most people don’t see the correction. The damage has been done. In this case, readers saw the headline and photo of Ms. Haley – the impression they have of her is not the good work she is doing at the UN, but the false belief that she would spend the outrageous sum of $52,000 on curtains.

2. The Weather Channel enjoys a good reputation of providing accurate weather reports. Faking the strength of the winds causes weather reporters to lose credibility and for people not to take their weather reports seriously.