Posted on March 30, 2016 in Wednesday's Example of Media Bias 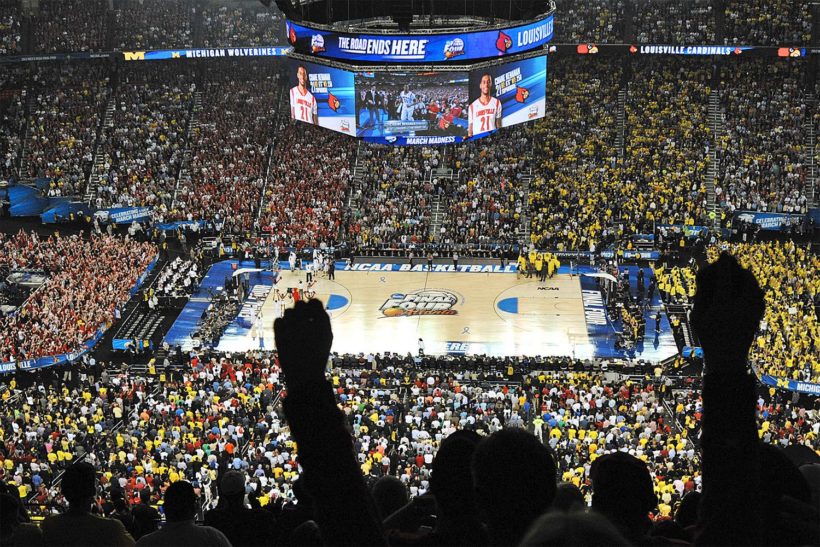 Adapted from a post by Julia Seymour, MRC Business:
March Madness 2016 has begun filling up sports bars, lowering office productivity and bringing basketball and non-basketball fans together through friendly betting.

The news media go crazy for “the big event,” devoting huge amounts of time to the annual college basketball tournament. Yet, the far more important matter of the national debt, which topped $19 trillion in 2016, is barely reported. Even though…experts have warned it is a serious threat.

That was more than 5 times as much coverage as they gave the national debt (3 minutes 9 seconds) which grew steadily through 2015, crossing the $19 trillion mark on Feb. 1, 2016.

There were plenty of reports about basketball “fever,” which ABC called “the sickness all bosses dread.” But the media talked about brackets, top picks and key players to watch. All three networks brought up President Obama’s brackets, mentioning it in a total of four broadcasts. If only the networks had been as willing to pick apart the national debt, examine its causes and consider solutions. After all, it’s a sure bet that the debt will impact every single American.

Instead, the few mentions of the debt were generally political. CBS used it to undermine Republican presidential front-runner Donald Trump’s tax plan while other reports included quotes from politicians mentioning the severity of the debt.

In spite of the fact that the debt exceeded $19 trillion for the first time ever last month, none of the network evening shows acknowledged it when it happened. The only mention of it since was an answer Republican presidential candidate Donald Trump gave in a CBS Evening News interview on Feb. 19.

The debt has grown to more than $58,000 per person in the U.S. according to Romina Boccia of The Heritage Foundation. Boccia said the growing national debt is due to federal spending, especially entitlement spending for Social Security, Medicare, Medicaid and Obamacare.

While basketball is certainly more fun, it’s the duty of the evening news programs to also cover important issues like the national debt — especially during an election cycle.

Although the networks were nearly silent about the debt threat, conservative, libertarian and even liberal groups have warned about the huge consequences for the compounding national debt.

Now in 2016, that massive debt has passed $19 trillion, without a peep from reporters on the evening news programs.

1. What types of bias does the excerpt above illustrate?

2. Julia Seymour asserts in her post, “While basketball is certainly more fun, it’s the duty of the evening news programs to also cover important issues like the national debt — especially during an election cycle.”
a) Do you agree with this assertion? Explain your answer.
b) Ask a parent the same question.

NATIONAL DEBT – the total amount of money that a country’s government has borrowed, by various means

In 2012, the liberal Brookings Institution warned that the mounting debt was a “real national security threat.”

“Why is this situation so serious? First, we are headed for a level of debt that within a decade could require us to spend the first trillion dollars of every year’s federal budget servicing that debt. Much less money will be left for other things,” Brookings scholars Kenneth G. Lieberthal and Michael E. O’Hanlon wrote. “That is a prescription for a vicious cycle of underfinancing for our infrastructure, national education efforts, science research and all the other functions of government that are crucial to long-term economic growth. Robust defense spending will be unsustainable too. Once we get in this rut, getting out will be very hard.”

“Other countries sense our weakness and wonder about our purported decline. If this perception becomes more widespread, and the case that we are in decline becomes more persuasive, countries will begin to take actions that reflect their skepticism about America’s future,” they added.