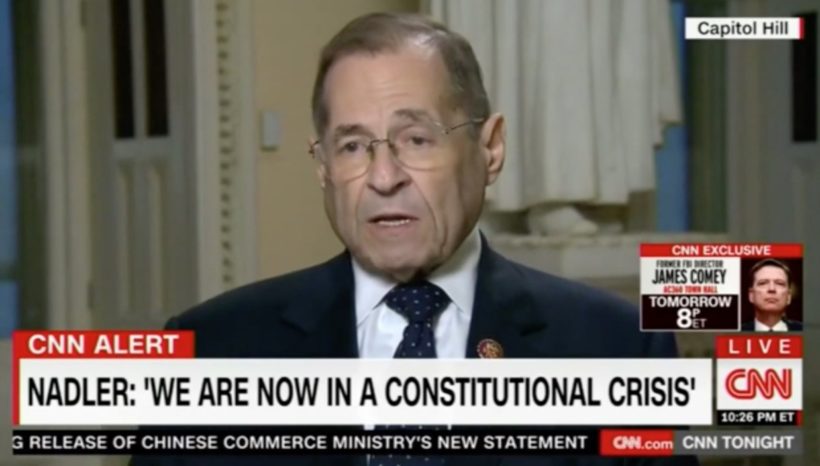 Jerry Nadler (Democrat, New York), the chairman of the House Judiciary Committee, dramatically declared that we are now in a “constitutional crisis.”

MRC analysts looked at all coverage on broadcast ABC, CBS, NBC and cable CNN and MSNBC networks from May 8 to 12, finding 386 utterances of the term “constitutional crisis” by hosts, analysts, or guest journalists. This count did not include cases in which the term was used by political partisans, such as members of Congress, former administration officials, or Democratic and Republican strategists.

Watch the video below for clips of the media talking about the supposed “constitutional crisis”:

CNN and MSNBC’s regular reporting has included no mention of the critics who disagree that such a crisis exists.

(Excerpted from a May 14 post by Bill D’Agostino at MRC.)

Special Counsel Robert Mueller’s almost 2 year investigation–into the accusation that the Trump campaign colluded with the Russians to interfere in the 2016 election–ended recently.  Mr. Mueller could not find President Trump guilty of any wrongdoing.

Democrats, who control the majority in the House, do not accept Mr. Mueller’s conclusion and are therefore conducting their own investigation. The president has instructed his administration that they should not respond to the Democrats’ subpoenas.

As soon as the Democrats said this is a “Constitutional crisis,” multiple stations and journalists have been repeating this idea.

In his report, Mr. D’Agostino writes, “Evidently Democrats need only utter the words “constitutional crisis” for the media to report it as fact” – the implication being that the media is not independent or objective.

What do you think? Is it biased for these networks to repeat this claim non-stop? Explain your answer.