Posted on October 18, 2017 in Wednesday's Example of Media Bias 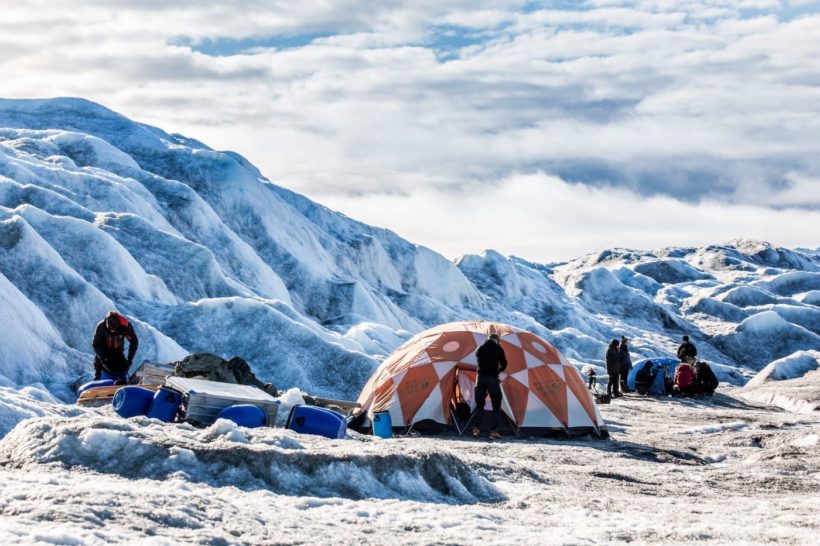 The Greenland Ice Sheet is a sought-after spot for travelers in search of unmistakable Arctic adventure.

from an Accuracy in Media report by Jon Street, Oct. 6, 2017:
A study found that more ice formed in the Arctic in 2017 than in all but four of the last 37 years, challenging the media narrative that the earth is warming and seas are rising because of manmade activity.

Instead of reporting this study, media outlets focused on another report that [supported its] narrative.

The Polar Portal, which publishes climate research from the Danish Meteorological Institute, the Geological Survey of Denmark and Greenland and the National Space Institute, and is funded by the Danish Cooperation for Environment in the Arctic, according to its website, published its annual surface mass budget summary in September.

The report looks at how much ice Arctic glaciers gain compared with how much ice they lose from warmer temperatures, a difference referred to by scientists as the Surface Mass Budget.

“This year, we estimate the total mass budget to be close to zero and possibly even positive,” the summary on Polar Portal read.

The explanation added how exactly scientists came to their conclusion:

“Greenland on average loses around 500 Gt of ice each year from calving and submarine melt processes. If we subtract this from our figure of 544 Gt [Gross tonnage] for the SMB it would suggest Greenland gained a small amount of ice this year.

“However, compared to the approximately 3600 Gt of ice, corresponding to 1cm of global average sea level rise that Greenland has lost since 2002, this year’s slightly positive balance does not add much extra,” it said.

But instead of reporting on these facts, (media reports) instead covered other recent studies that focused on massive chunks of ice breaking away from glaciers at the opposite tip of the globe.

“A key Antarctic glacier just lost a huge piece of ice — the latest sign of its worrying retreat,” the Washington Post’s Chris Mooney wrote in a piece published Sept. 25. Mooney, who cited researchers at NASA, said the break was caused by “warmer ocean waters reaching the base of the glacier and weakening it.”

Mooney’s Washington Post article was published 13 days after the Polar Portal summary, but his report did not acknowledge that in other parts of the world, there is more ice.

Similarly, Quartz environment report Zoe Schlanger wrote an article published on Sept. 27, two weeks after the Polar Portal summary’s publication, which focused on the size of the Antarctic glacier that broke off into the ocean.

“It’s a problem that an iceberg over twice the size of Paris just broke off Antarctica,” the Quartz headline read. The article noted that it was “the second major ice-loss event for that glacier in the last two years,” citing a similar event that occurred in 2015. And, of course, in keeping with the mainstream media’s narrative, the author quoted Glaciologist Peter Neff as calling it “concerning for future sea level rise.”

Like the Washington Post piece, Quartz failed to report the Polar Portal summary that reported more ice on the Greenland ice glacier. To the Quartz author’s credit, though, the report did cite a Verge article, which stated that the broken glacier would not cause a rise in sea levels, likening the effect to how an ice cube in a glass of water does not raise the water level in the glass after it melts.

And, in another article headline, USA Today’s Doyle Rice asked, “should we be worried?”

“Yes and no. While iceberg formation is a natural process — thousands break off each year — the warming waters in Antarctica are cause for concern,” Rice wrote.

Citing British Antarctic researcher Adrian Luckman, Rice added, “the most recent iceberg is a part of an ongoing retreat of the glacier resulting from warmer ocean waters eroding the base of the floating ice tongue.” Again, nowhere did Rice or USA Today cover the Polar Portal summary finding that, in the Arctic, the amount of new ice that formed in that part of the world in 2017 was the fifth-most to form a single year since the early 1980s.

2. Why do you think The Washington Post, Quartz and USA Today reporters ignored the Polar Portal’s climate research study on Arctic glaciers?

3. If the Polar Portal’s research showed the opposite, do you think the reporters would have cited the study?

1. Bias by omission and selection of sources.