Posted on December 7, 2016 in Wednesday's Example of Media Bias 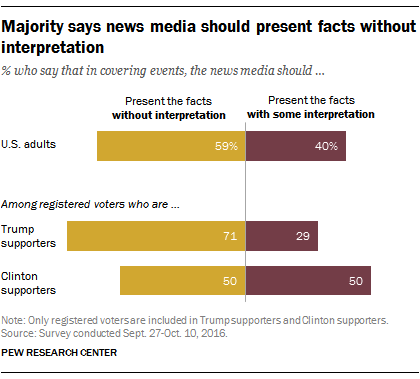 A key question that news organizations face, particularly during intense periods like election years, is to what degree journalists should present the facts with some interpretation….

A majority of U.S. adults (59%) reject the idea of adding interpretation, saying that the news media should present the facts alone, a recent Pew Research Center survey found. The survey was conducted Sept. 27-Oct. 10, before Election Day.

There are substantial partisan [strong support for a political party] differences over whether journalists should include interpretation in their stories:

1. Are you surprised by the Pew Poll results that show the majority of Americans believe the news media should present the facts alone, without interpretation? Explain your answer.

3. a) What is your opinion: Should the media include interpretation in their news reports? Why or why not?
b) Ask a parent the same question.

4. There are substantial partisan differences over whether journalists should include interpretation in their stories. Trump supporters mostly say just the facts; Clinton supporters are split – half against interpretation and half for it.

If true, why do you think this is so?

2. interpret – to explain or tell the meaning of: present in understandable terms
interpretation – the act of explaining the meaning of something