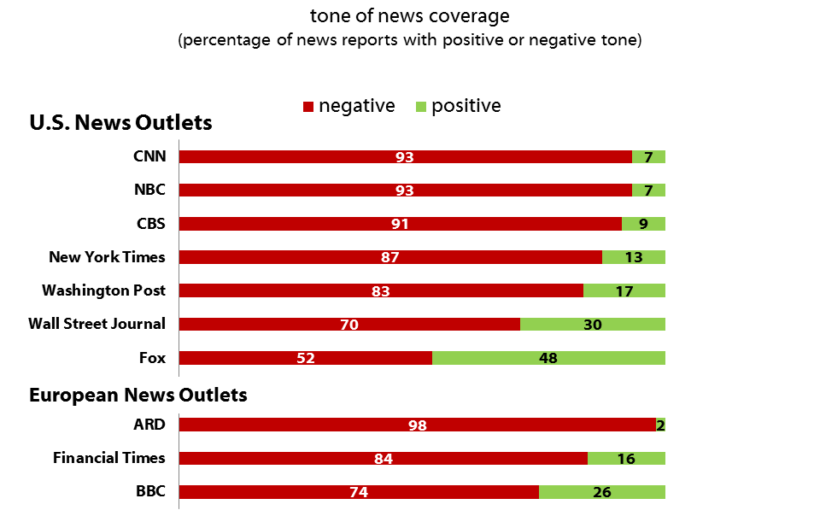 The report is based on an analysis of:

To arrive at the percentages, Harvard obtained data from Media Tenor, which “codes” media according to its topic, source, and tone. The broadcast portion of the study accounts for reporting on CNN’s The Situation Room, CBS Evening News, Fox’s Special Report, and NBC Nightly News, but does not represent talk show coverage. Newspaper analysis incorporates all sections but obituaries, sports, and letters to the editor.

Trump’s coverage during his first 100 days set a new standard for negativity. Findings include:

The study also divided news items across topics. On immigration, healthcare, and Russia, more than 85% of reports were negative. (Consider the fact that on illegal immigration, President Trump has broad public support in his effort to crack down on sanctuary cities.)

On the economy, news reports were still negative, but less negative than other topics – 54% negative to 46% positive.  It should be difficult to publish negative stories about the economy when it is improving. The study highlighted one exception: Trump got overwhelmingly positive coverage for launching a cruise missile attack on Syria.

Around 80% of all reports were positive about that.

Trump received 80 percent negative coverage, with only 20 percent of news reports were positive. Compare that to:

“The media needs different narrative frames [when reporting on President Trump] – not just an antagonistic one,” said Nicco Mele, director of Harvard’s Shorenstein Center, to The Daily Caller News Foundation. 1. How do you think persistent and widespread negative coverage of President Trump affects the way people view him and his administration?

2. What to you do to avoid being influenced / having your views shaped by the media?

CHALLENGE: Check out the editorial cartoons found at several of the media sources evaluated in the Harvard study. What percentage of the cartoons about President Trump are positive? negative? neutral?