Posted on September 11, 2019 in Wednesday's Example of Media Bias 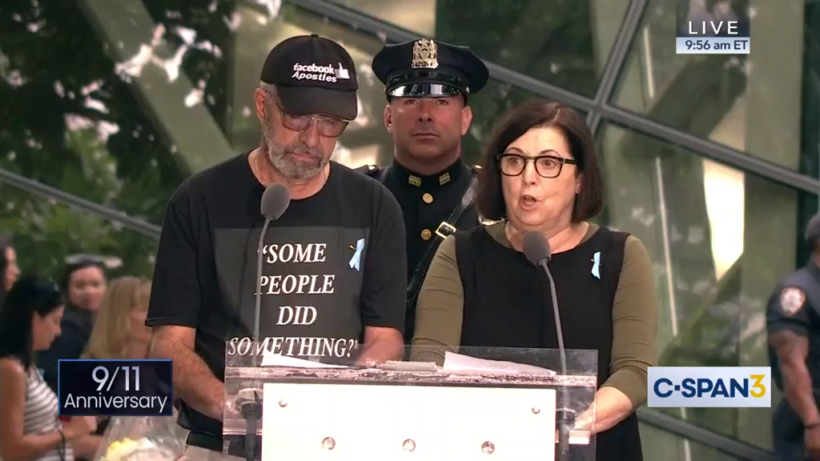 Every September 11 in New York City, the loved ones of those killed by Islamic terrorists read aloud the names of their brothers, sisters, mothers, fathers, husbands and wives who perished that day.

Nicholas Haros Jr., who lost his mother Frances Haros in the attack, showed up to this year’s ceremony with a shirt that read,

“Some people did something”

in reference to Congresswoman Ilhan Omar’s [Democrat, Minnesota] speech in March to The Council on American Islamic Relations. (CAIR is a Muslim civil rights and advocacy group founded in 1994.)  Rep. Omar falsely claimed that “CAIR was founded after 9/11 because they recognized that some people did something and that all of us [Muslims] were starting to lose access to our civil liberties.”
Watch her make the false claim about CAIR and state “Some people did something”:

Mr. Haros wanted to voice his opinion addressing the Congresswoman’s claims.
Watch the video of his comments, made today, 9/11/19, below:

Which one of the following headlines (and first paragraphs of the news reports) on Mr. Haros’ remarks displays bias?

“9/11 victim’s son blasts Ilhan Omar at Ground Zero memorial service”
(by Natalie Musumeci, New York Post) – A man whose mother was a 9/11 victim ripped Rep. Ilhan Omar for describing the terror attacks as “some people did something” during the annual anniversary ceremony at Ground Zero on Wednesday. …

“Son of 9/11 victim addresses Ilhan Omar during memorial: ‘Show respect in honoring them, please'”
(by Jeanine Santucci, USA Today) – During Wednesday’s 9/11 Memorial and Museum ceremony in New York to honor the lives lost 18 years ago, one victim’s family member had a message for freshman Congresswoman Ilhan Omar. …

“Son of 9/11 victim criticizes Rep. Ilhan Omar during memorial service”
(from Fox31 Denver) – The son of a 9/11 victim tore into Democratic Rep. Ilhan Omar of Minnesota over her recent “Some people did something” reference to the terrorist attacks 18 years ago. …

9/11 Victim’s Son Challenges Rep. Ilhan Omar’s “Some People” Comments
(from C-Span) – Nicholas Haros, whose mother, Frances Haros, was killed at the World Trade Center on 9/11, challenge[d] comments made by Representative Ilhan Omar at an event in March hosted by the Council on American-Islamic Relations (CAIR), where she said: “CAIR was founded after 9/11 because they recognized that some people did something, and that all of us were starting to lose access to our civil liberties.” After reading the names of some of those killed on 9/11, including his mother, Haros says: “‘Some people did something’ said a freshman congresswoman from Minnesota…..

1. Which news report is biased?

2. What type of bias does the news organization display?

1. The Reuters report is biased.