Facebook’s War on Freedom of Speech

Posted on February 17, 2016 in Wednesday's Example of Media Bias 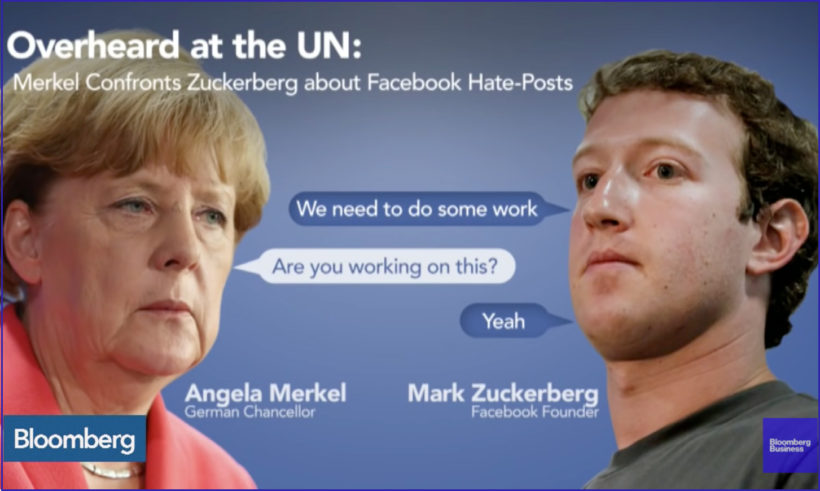 German Chancellor Angela Merkel (left) met Mark Zuckerberg, Chairman, CEO and co-founder of Facebook (right) at a UN development summit in New York. As they sat down, Chancellor Merkel’s microphone, still on, recorded Merkel asking Zuckerberg what could be done to stop anti-immigration postings being written on Facebook.

by Douglass Murray at GatestoneInstitute.org:

… One of the most [concerning] stories of the past year was hardly even reported:

In September, German Chancellor Angela Merkel met Mark Zuckerberg of Facebook at a UN development summit in New York. As they sat down, Chancellor Merkel’s microphone, still on, recorded Merkel asking Zuckerberg what could be done to stop anti-immigration postings being written on Facebook. She asked if it was something he was working on, and he assured her it was.

At the time, perhaps the most revealing aspect of this exchange was that the German Chancellor — at the very moment that her country was going through one of the most significant events in its post-war history — should have been spending any time worrying about how to stop public dislike of her policies being vented on social media. But now it appears that the discussion yielded consequential results.

Last month, Facebook launched what it called an “Initiative for civil courage online,” the aim of which, it claims, is to remove “hate speech” from Facebook — specifically by removing comments that “promote xenophobia.”

Facebook is working with a unit of the publisher Bertelsmann, which aims to identify and then erase “racist” posts from the site.

The work is intended particularly to focus on Facebook users in Germany.

At the launch of the new initiative, Facebook’s chief operating officer, Sheryl Sandberg, explained that, “Hate speech has no place in our society — not even on the internet.” She went to say that, “Facebook is not a place for the dissemination of hate speech or incitement to violence.”

Of course, Facebook can do what it likes on its own website. What is troubling is what this organization of effort and muddled thinking reveals about what is going on in Europe.

The mass movement of millions of people — from across Africa, the Middle East and further afield — into Europe has happened in record time and is a huge event in its history. As events in Paris, Cologne and Sweden have shown, it is also by no means a series of events only with positive connotations.

The [concerning] thing about what Facebook is doing is that it is now removing speech that presumably almost everybody might consider racist — along with speech that only someone at Facebook decides is “racist.”

And it just so happens that this idea of “racist” speech appears to include anything critical of the EU’s current catastrophic immigration policy.

By deciding that “xenophobic” comments in reaction to the crisis are also “racist,” Facebook has made the view of the majority of the European people (who, it must be stressed, are opposed to Chancellor Merkel’s policies) into “racist” views, and so is condemning the majority of Europeans as “racist.” This is a policy that will do its part in pushing Europe into a disastrous future.

Because even if some of the speech Facebook is so scared of is in some way “xenophobic,” there are deep questions as to why such speech should be banned. In lieu of violence, speech is one of the best ways for people to vent their feelings and frustrations. Remove the right to speak about your frustrations, and only violence is left. Weimar Germany — to give just one example — was replete with hate-speech laws intended to limit speech the state did not like. These laws did nothing whatsoever to limit the rise of extremism; it only made martyrs out of those it pursued, and persuaded an even larger number of people that the time for talking was over.

The sinister reality of a society in which the expression of majority opinion is being turned into a crime has already been seen across Europe. Just last week, reports from the Netherlands told of Dutch citizens being visited by the police and warned about posting anti-mass-immigration sentiments on Twitter and other social media.

In this toxic mix, Facebook has now — knowingly or unknowingly — played its part….

Douglas Murray, a British writer, journalist and commentator, is based in London, England.

1. a) Before reading this post, had you heard anything about this story?
b) What type of bias does the American media display by not widely reporting this story?

2. In an editorial by the NY Post editorial board on Jan. 6, “Facebook’s anti-Israel double standard on hate speech” the editors write:

Facebook insists it “does not tolerate hate speech” and is vigilant about taking down such content. But the social-media giant seems to apply a double standard.

It created two nearly identical pages filled with hate-filled rants and blatant incitement to violence. One page was called “Stop Israelis”; the other, “Stop Palestinians.” Then it reported both pages to Facebook.

According to the group’s YouTube video, Facebook soon agreed that “Stop Palestinians” contained “credible threats of violence” that “violated our community standards” — and pulled the page. But Facebook said the mirror “Stop Israelis” page was “not in violation of Facebook’s rules.”

It may be tough to zap all hate content in a timely manner, but Facebook plainly needs to show more vigilance — without political preference. (From NYPost editorial board, Jan. 6, 2016)

3.  Should Facebook block users from writing posts opposing immigration to Europe?  (If Facebook does block these thoughts,  what effect do you think it has on others who believe the same?)

4.  According to a Pew poll, 30% of American adults get their news from Facebook. If Facebook does block these thoughts, or others it judges offensive, what effect do you think it has on a users’ outlook on various news events?