Posted on April 17, 2019 in Wednesday's Example of Media Bias 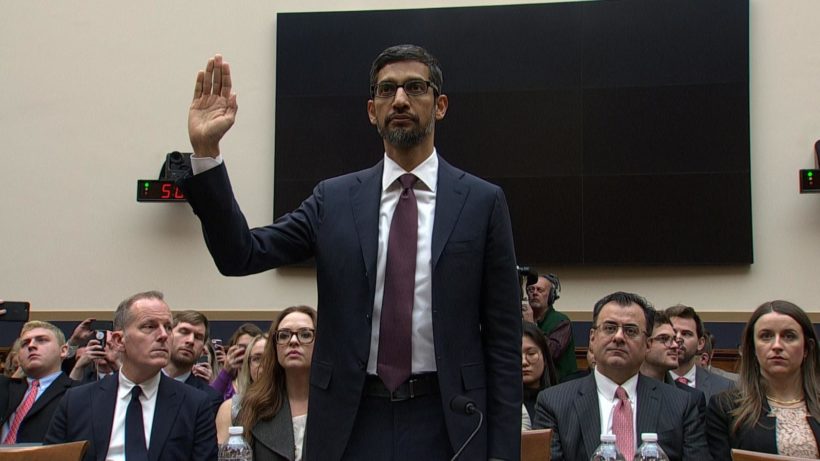 "I lead this company without political bias and work to ensure that our products continue to operate that way. To do otherwise would go against our core principles and our business interests." - Google CEO Sundar Pichai to Congress in December 2018.

(by Mary Margaret Olohan, The Daily Caller, April 12) – Google listed “Unplanned,” the story of former abortion clinic director and now pro-life activist Abby Johnson, on search results as a “drama/propaganda” film, according to a Thursday tweet from The Daily Signal’s senior writer and producer, Kelsey Bolar. Following backlash, Google now lists the genre for this movie as “drama.”

The film was released on March 29 and has an R rating. (RELATED: Twitter Temporarily Suspended ‘Unplanned’ Movie Account On Opening Weekend)

“Who knew that ‘propaganda’ was a movie genre? @Google once again exposing its gross political bias,” Harkness said in a tweet.

Live Action founder and President Lila Rose pointed out in a tweet that though “Unplanned” was labeled as propaganda, a 1935 Nazi propaganda film is listed on Google search engine results as “war/history.”

“Yesterday @Google had their contempt for pro-life voices on full display by labeling @UnplannedMovie as ‘propaganda.’ Meanwhile, ‘The Triumph of the Will’ a literal Nazi propaganda film is labeled as ‘history/war’ Was this just another ‘mistake,’ or ‘algorithm” error?” Rose tweeted.

Google adjusted the movie’s label as of Friday.

“When we’re made aware of disputed facts in our Knowledge Graph, we work to fix the issues, as we’ve done in this case,” a Google spokesperson told The Daily Caller News Foundation.

Johnson, who left Planned Parenthood after witnessing an ultrasound during an abortion, expressed frustration at Google for labeling her story as propaganda.

“Executives at Google should actually watch the film before labeling it propaganda or anything else,” Johnson said. “They are showing their obvious bias against people finding out the truth about abortion. What about the movie ‘Obvious Child,’ which Planned Parenthood heavily promoted, or any movie by Michael Moore? Why aren’t those labeled propaganda? It’s a disservice to not only free speech, but also practical common sense, when they are actively hampering the truth about a divisive issue in our country to be known.”

1. What type of bias does the excerpt above illustrate?

2. A Senate Judiciary subcommittee held hearings this week, charging Google, Facebook and Twitter with being biased against conservatives – a charge they deny. Google said in a written statement that it works to ensure “our products serve users of all viewpoints and remain politically neutral” but it acknowledged that “sometimes our content moderation systems do make mistakes.” What do you think? Did Google make an honest mistake by labeling a pro-life movie as propaganda, while not giving that label to any other movies? Explain your answer.

3. Do a Google search for movies that conservatives would disagree with: e.g. any Michael Moore movie; Al Gore’s global warming movie “An Inconvenient Truth”… How are these labeled by Google?

4. Why do you think Google labeled an actual propaganda movie – the Nazi propaganda film “The Triumph of the Will” – as ‘history/war’ but labeled a pro-life story as propaganda?

CHALLENGE: If you are 18, watch the movie. Is this true story of a Planned Parenthood executive’s experience propaganda?