Posted on October 21, 2015 in Wednesday's Example of Media Bias 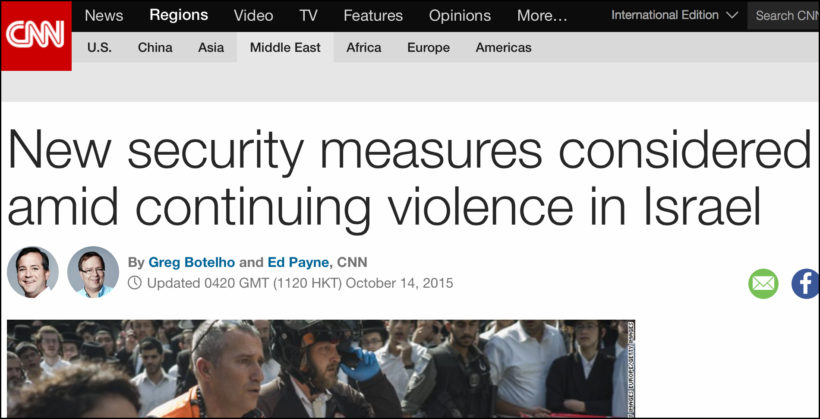 from CAMERA.org:
“When, and how, will the violence stop?” begins CNN a lengthy article on October 13 about “more bloodshed” which dismally fails to identify the Palestinian perpetrators of said violence and bloodshed (“New security measures considered amid continuing violence in Israel“).

Of course, violence is hardly unprecedented in this part of the world. But the nature of what has happened in recent weeks — with a spate of stabbings and other attacks, from a shooting to driving into crowds — is unique, compared to rocket attacks or more obviously orchestrated armed campaigns of the past.

Who is carrying out the stabbings, shooting and ramming attacks? Who has carried out the rocket attacks and the more obviously orchestrated armed campaigns? Who has been targeted, wounded and killed in the spate of attacks? CNN doesn’t say, and readers have therefore no way of grasping “the nature of what has happened in recent weeks”: that Palestinians, primarily youth, have been attempting to murder Israelis, young and old.

Botelho and Payne continue to dance around the question of who is carrying out the attacks by stating three paragraphs later: “Some have suggested the violence represents the start of the third intifada, or uprising, by Palestinians.” From there, the CNN journalists redirect to Palestinian clashes with Israeli security forces, leaving aside the unaddressed issue of culpability in the stabbing, ramming and shooting attacks on Israeli civilians and officers.

“We’ve tried negotiations and it didn’t work,” a Palestinian youth in the West Bank city of Hebron told CNN as thick smoke rose from flaming tires. “So now we will fight.”

This youth was apparently referring to persistent protests and clashes with Israeli security forces.

On what basis exactly they conclude that the youth’s declaration of the Palestinian readiness to fight refers to clashes with security forces, as opposed to stabbings, shootings and ramming attacks, is not explained. But, in light of the reporters’ refusal to link Palestinians with these attacks, their tenuous conclusion is not surprising.

The article’s most glaring indication that the authors utterly refuse to identify Palestinian perpetrators appear in paragraphs 19 through 22, which finally address specific instances of Palestinian terrorism (after first noting the relatively isolated cases of Jewish attacks carried out against Arabs, and against a Jew mistaken for an Arab.) The striking double standard, in which the Jewish assailant is identified clearly as “an Israeli Jew,” while the Arab perpetrators are referred to only as “men,” man,” or “person,” cannot be missed:

Israeli authorities documented several bloody attacks, including one in which an Israeli Jew stabbed a man he mistakenly thought was Arab outside an IKEA near Haifa; and an Israeli Arab hit on the head with a stick on a Netanya beach, according to police spokeswoman Luba Samri.

Other incidents proved even more bloody and were carried out by men that Israeli authorities claim have ties to terrorist groups.

In Jerusalem’s ultra-Orthodox Malkei Israel area, one person died and eight were injured when a man drove into a bus stop, ran over three people, then got out of his car and began stabbing people, according to Samri.

And in the Armon Anatziv [sic] area of Jerusalem, one person with a gun and another with a knife boarded a bus and launched an attack. . . .

Police managed to kill one and wound the other, who was taken to a hospital — but not before two passengers had died. (Emphases added.)

In a second equally egregious double standard, the intrepid pair supplies the identity of the Arab wounded while at the same time consistently concealing the identity of the Jewish wounded. Thus, a “man [mistaken for] Arab,” was stabbed and an “Israeli Arab [was] hit on the head,” but “one person died and eight were injured,” “three people” were run over and “people” were stabbed in the Malkei Israel attack. In the Armon Hanatziv attack, “two passengers had died.” Botelho and Payne don’t bother to note the wounded in the Armon Hanatziv attack, but there were some 15 of them.

Also striking is the fact that all of the Jewish Israeli fatalities, whose identities are reduced to “person,” and “passengers,” died. CNN does not say that they were “killed.” Nor does CNN say that any of the Palestinian attackers “killed.” In fact, in the long CNN article on the bloodshed, only Israeli police “kill.”

While Botelho and Payne ignore the estimated 15 Israelis wounded in a terror attack as they rode the bus in Armon Hanatziv, the duo are very attentive to Palestinians wounded while confronting Israeli forces during violent clashes. Thus, before they note specific instances of Palestinian terrorism (even as they conceal the assailants’ identities), the CNN reporters give detailed figures for Palestinian wounded. They write:

The official Palestinian news agency, WAFA, reported that “live ammunition” wounded at least five Palestinians at the Beit Hanoun crossing point Tuesday. This is after the 18 reportedly shot and injured the previous night at the Hewwara military checkpoint.

The Palestinian Red Crescent reported that at least 155 people needed medical care — most for tear gas inhalation, though 26 were wounded by rubber bullets, six by live bullets and five reportedly beaten — in the West Bank and Jerusalem. Thirty-seven more were injured in Gaza.

Finally, while the article identified the Israeli Jews wounded on Malkei Israel street in the ramming and stabbing attack only as “people,” the Palestinian casualties from clashes are clearly identified as “Palestinian” in the first reference.

Unanswered Questions About the Violence

In short, the CNN article which ostensibly (supposedly) sets out to answer “when, and how, will the violence stop,” fails miserably to begin to address the more basic question: who is carrying out the violence against whom?

(The analysis above is from CAMERA.org (Committee for Accuracy in Middle East Reporting in America)

What three types of bias are illustrated in the report on CNN above?

Bias by omission, labeling and spin.