Posted on September 14, 2016 in Wednesday's Example of Media Bias 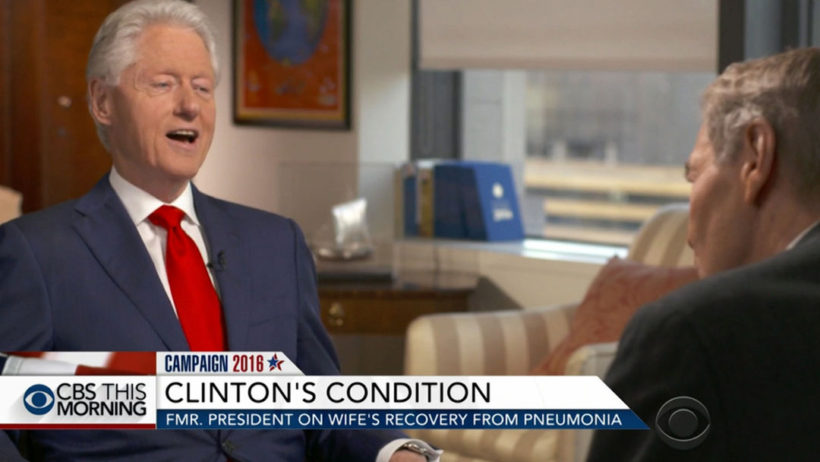 Democratic presidential nominee Hillary Clinton passed out as she was leaving Sunday’s 9/11 ceremony in NYC. Her campaign reported that she was dehydrated, then that she has pneumonia.

On Monday, former President Bill Clinton was interviewed by CBS’ Charlie Rose to discuss Hillary’s health.  During an airing of the interview on Monday night’s CBS Evening News, CBS omitted what some would call a Freudian-like slip from Clinton on the status of his wife’s health. Though Clinton corrected himself mid-statement [first describing the medical episodes as happening “frequently”], it was not a message the Clinton campaign, or apparently CBS, wanted out in the public, so they edited it out.

The network backpedaled Tuesday and included the full quote on their morning show but Tuesday morning’s cable shows on CNN, MSNBC and Fox all used the edited clip from CBS instead. (As of 5 p.m. Tuesday, the CBSNews website still posted the edited clip.)

Watch the original unedited segment below:

The edit in the second clip from CBS Evening News is so seamless – without any visible transition – that it’s clear CBS was trying to make it appear that this was the full response from Clinton.

The Daily Caller’s Chuck Ross first noted the discrepancy between what was played on TV and what CBS’ website read. Here is the full quote posted on CBS’ website:

BILL CLINTON: Well if it is, it’s a mystery to me and all of her doctors, because frequently—well not frequently, rarely—but on more than one occasion, over the last many, many years, the same sort of thing happened to her when she got severely dehydrated.

When it was pointed out, CBS said the Evening News clip was “edited purely for time while on deadline for the live broadcast.” TMZ comments: “It’s only 3 seconds – so, seems odd it would have been removed for time purposes.”

1. Why do you think CBS edited out part of Bill Clinton’s response, clearly changing his answer?

2. Editing out the phrase “because frequently—well not frequently” gives viewers a different picture of the state of Mrs. Clinton’s health. Voters deserve to know if a candidate they may be voting for has any serious health issues that could prevent her from leading the country and making the decisions that need to be made. One viewer commented:

“CBS (and the media) constantly edit out things that might be a problem for Hillary Clinton to help her – but when it comes to Republian nominee Donald Trump they are not so helpful.  They would never edit anything to help a Republican look better – if anything, they focus on making him look bad. The media cannot be trusted to report accurately on the presidential campaign.”

a) Do you agree with this assertion? Explain your answer.
b) Ask a parent the same question.