Posted on March 6, 2019 in Wednesday's Example of Media Bias 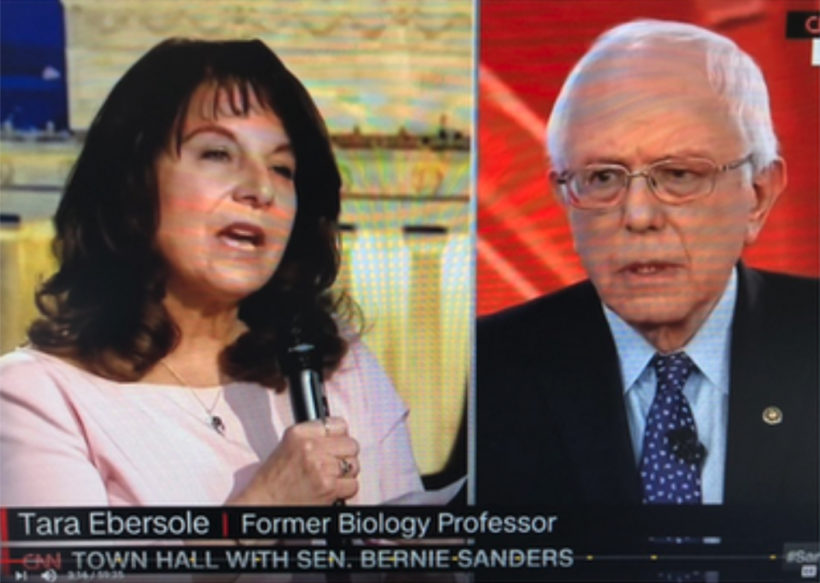 By Ruth Brown, NY Post:
…CNN has come under fire for presenting the questioners on Monday’s Townhall with presidential candidate Senator Bernie Sanders as everyday voters, without mentioning that some are local party officials or work for politically connected firms.

Among those who quizzed the Democratic-socialist presidential hopeful was:

Lefty online news show “The Young Turks” noted that Shadi Nasab asked one of the toughest questions of the night — grilling the Vermont senator on a previous statement that he was “a little bit busy running around the country trying to make the case to be elected as president” to respond to sex assault allegations from his 2016 campaign.

“Some of you will say that’s too large a coincidence that someone…interning at the lobbying firm happens to ask the one that is the number one talking point against Bernie Sanders framed in exactly the way that an opponent would ask that question,” said host Cenk Uygur.

“Is it at a bare minimum relevant that she’s interning at a lobbying firm in DC? Bernie Sanders’ agenda would obviously not help lobbying firms in DC, so there’s a whole range of options as to how that question got onto the stage in the first place, but there’s no question CNN should’ve revealed her other attribute [her employer],” he added.

Uygur noted that CNN contributor Donna Brazile slipped town hall debate questions to Hillary Clinton during her 2016 primary against Sanders — and said the lack of disclosures in Monday’s segment will only further the impression that CNN is biased against Sanders. (During the 2016 primaries, CNN contributor Donna Brazile leaked questions to Team Hillary in advance of at least two debates with Bernie Sanders. CNN fired Brazile but the network did not explain how and why she had access to those questions. Later, emails were revealed showing that CNBC’s John Harwood and others asked Clinton campaign chief John Podesta and the Democratic National Committee for pointed questions to ask Republicans Jeb Bush and Ted Cruz.  A November 2016 poll found 75 percent thought the news media are pro-Clinton; only 7 percent said pro-Trump.)

“When CNN does a town hall for the other candidates and it’s New Hampshire, it’s in Iowa, it’s in the heartland. But when Bernie Sanders, they finally give him a town hall, they happen to put it in Washington, DC, and fill the room with lobbyists and PR agents and people that work in political offices — and then they don’t tell you? Come on!” the host exclaimed. Shadi Nasab was presented by CNN as a college student, even though her LinkedIn page says she is an intern at DC lobbying firm Cassidy and Associates. Charles County Democratic Central Committee Chair Abena McAllister was described by CNN as a mother of two and an active Democrat.

The post above is from “CNN didn’t disclose Democratic Party ties of questioners in Sanders town hall” by Ruth Brown on Feb. 27 at NYPost .com

1. CNN has been exposed as favoring one candidate over another when pretending to give the candidates an objective forum. First in 2016 with Hillary Clinton over her primary rival Bernie Sanders (later favoring Hillary over her Republican rivals). Now, as the 2020 presidential primary season gets into full swing, CNN displays bias once again against Democratic-socialist Bernie Sanders. Should viewers trust CNN? Why or why not?

2. CNN on Wednesday admitted it failed to disclose the Democratic Party ties of audience members who asked questions during its recent Sen. Bernie Sanders town hall. CNN said in a statement, “Though we said at the beginning of the Town Hall that the audience was made up of Democrats and Independents, we should have more fully identified any political affiliations.”
Does this statement change your opinion on the trustworthiness of CNN? Explain your answer.

3. Unless you support the Democratic candidate for president CNN has in mind you might not be too happy with their election reporting. If this is the deceptive treatment a popular Democratic candidate receives, should Republican and/or Independent Trump supporters expect fair reporting on their candidate from CNN? Explain your answer.