A journalist makes a case against fairness

Posted on January 11, 2017 in Wednesday's Example of Media Bias 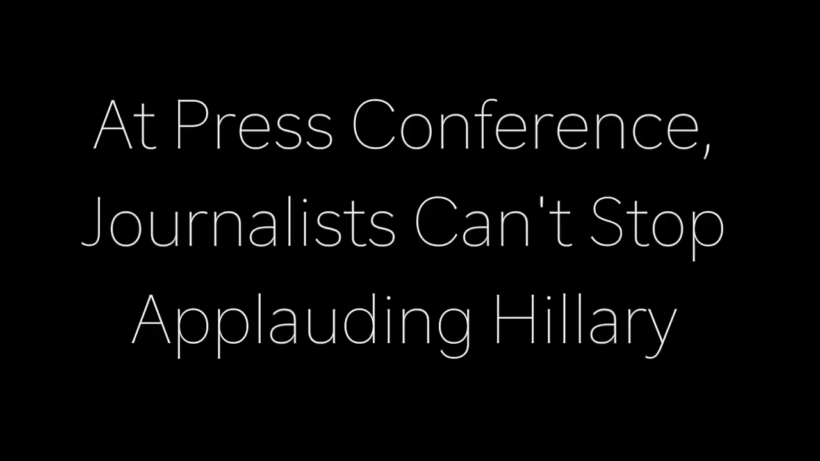 A juxtaposition of headlines from the Hill reveals a lot about politics and journalism in 2016:

The latter story appeared three minutes after the former on August 5th, and both were about the same event. The second story was not a direct response to the first, which is to say the journalists didn’t applaud Mrs. Clinton’s call to hold her accountable. According to a Time [magazine] transcript, they applauded her eight times in all; National Review has a video montage. [Watch as journalists keep applauding Hillary Clinton’s answers]:

Our favorite applause line, as per the transcript: “I served as secretary of state. And when I left, I had a 66% approval rating.”

The biggest news to come out of the Q&A portion came when NBC’s Kristin Welker asked Mrs. Clinton about her latest evasion in the classified email scandal. She prefaced a long, rambling answer with a vivid quote regarding the false answer she gave Chris Wallace on “Fox News Sunday”: “I may have short-circuited it.”

“Before [Mrs.] Clinton’s appearance, conference staffers went around the room reminding people that it’s inappropriate for journalists to give politicians standing ovations.”

So was she speaking to journalists or to supporters of her candidacy?

That line seems even more blurred than usual this year [2016], and some journalists find that acceptable. Jim Rutenberg writes a column for the New York Times business section called “Mediator” (it’s about mass communications, not dispute resolution). In [August 2016] he raises the following question:

If you’re a working journalist and you believe that Donald J. Trump is a demagogue playing to the nation’s worst racist and nationalistic tendencies, that he cozies up to anti-American dictators and that he would be dangerous with control of the United States nuclear codes, how the heck are you supposed to cover him?

Before we consider Rutenberg’s answer, let’s try offering one of our own: Maybe you shouldn’t.

If you have such a strong opinion about one of the major candidates, perhaps you shouldn’t be reporting on the election. You could request a transfer to another beat, or to the opinion section.

If you really feel strongly about preventing Trump’s election, perhaps you should consider a career change. You could go to work for Mrs. Clinton’s campaign, or for one of the many independent advocacy organizations that support it.

Rutenberg never considers these possibilities. Instead, he wants to bring the mountain to Muhammad:

If you believe all of those things, you have to throw out the textbook American journalism has been using for the better part of the past half-century, if not longer, and approach it in a way you’ve never approached anything in your career.

If you view a Trump presidency as something that’s potentially dangerous, then your reporting is going to reflect that. You would move closer than you’ve ever been to being oppositional. That’s uncomfortable and uncharted territory for every mainstream, nonopinion journalist I’ve ever known, and by normal standards, untenable.

He notes that Trump and his backers “are reprising longstanding accusations of liberal bias [by the media].” He writes:

This, however, is what being taken seriously looks like.

Hang on a second. Is Rutenberg claiming that journalists – who, whatever their biases, have heretofore maintained at least the pretense of fairness and balance – have never taken a candidate seriously before? Or that they are not taking Mrs. Clinton seriously?

Another way of putting the media-bias complaint is that conservatives – including some who oppose Trump – have long seen the media as tilting toward the Democratic Party and taking an “oppositional” posture toward Republicans. Rutenberg is recommending that they dispense with the veneer and embrace open partisanship [bias].

He doesn’t put it that way, of course. He tries to justify his proposed departure from journalistic standards with an appeal to journalistic ideals: Not to treat Trump differently from other candidates, he argues, would “be an abdication of political journalism’s most solemn duty: to ferret out what the candidates will be like in the most powerful office in the world.”

There are two obvious problems here. First, “what the candidates will be like” is a matter of speculation, not a fact that can be “ferreted out.”

Second and more important, the premise of Rutenberg’s column is that reporters have already made up their minds about Trump. If that is the case, then what they are ferreting out is facts that reinforce their preconceptions, and that they hope will persuade voters to cast ballots against Trump. That’s called “opposition research,” and it is a job for campaign operatives, not journalists.

Rutenberg acknowledges that the approach he recommends “is more than just a shock to the journalistic system. It threatens to throw the advantage to [Trump’s] news conference-averse opponent, Hillary Clinton, who should draw plenty more tough-minded coverage herself.” Well, yeah—though that would seem to be the objective, would it not?

The greater threat from the abandonment of journalistic standards is that it compounds the danger to the country if Mrs. Clinton is elected. In that event, our partisan press would no longer be oppositional. They would be mere servants of power, to an even greater extent than they have been for the past 7½ years.

If you have such a strong opinion about one of the major candidates, perhaps you shouldn’t be reporting on the election. You could request a transfer to another beat, or to the opinion section.

If you really feel strongly about preventing Trump’s election, perhaps you should consider a career change. You could go to work for Mrs. Clinton’s campaign, or for one of the many independent advocacy organizations that support it.

a) Do you agree with Mr. Taranto’s assertions? Explain your answer.
b) Ask a parent the same question. Discuss your answers.