Posted on December 10, 2020 in Thursday's Editorial 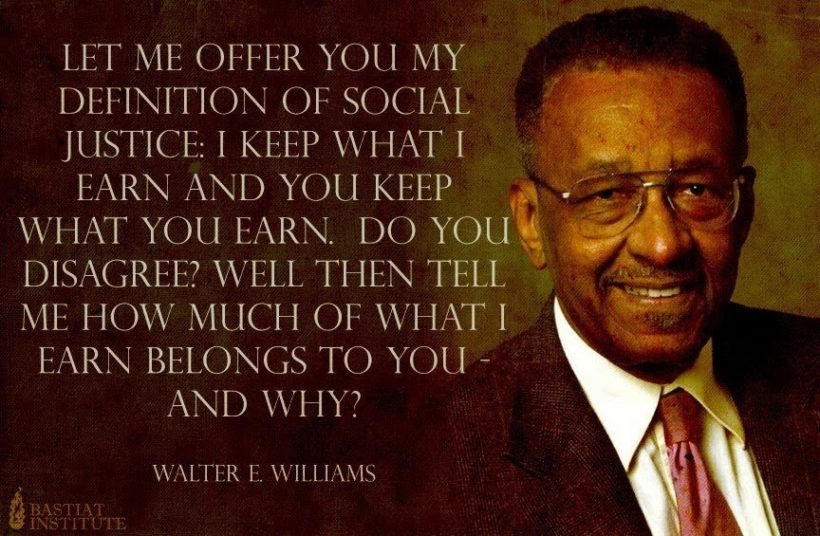 (by the OC Register Editorial Board) — Walter Edward Williams, one of the world’s greatest champions of liberty, passed away (last) week at the age of 84. His life and ideas will never be forgotten.

Born in Philadelphia on March 21, 1936 and raised in the Richard Allen housing projects, Williams never allowed himself to be a victim of his circumstances.

Williams always believed in the value of hard work and the fundamental promise of America. …

His first book, “The State Against Blacks,” published in 1982, is as relevant as ever. In it, he presented his case that, while racial discrimination and bigotry certainly exist, “it is the ‘rules of the game’ that account for many of the economic handicaps faced by Blacks. The rules of the game are the many federal, state and local laws that regulate economic activity.”

Overregulation by the government, including laws like occupational and business licensing, zoning regulations and the minimum wage, Williams argued, “systematically discriminate against the employment and advancement of people who are outsiders, latecomers and poor in resources.”

As he spent his life championing, the solution to these systematic barriers was to repeal such “antipeople” laws and unleash the power of the market to maximize opportunities for all people.

While it is fashionable among younger generations to condemn capitalism, Williams understood that capitalism is the greatest means for liberating people from poverty known to man.

“Prior to capitalism, the way people amassed great wealth was by looting, plundering and enslaving their fellow man,” he said. “Capitalism made it possible to become wealthy by serving your fellow man.”

At the core of Williams’ views of the world is the notion of self-ownership, the principle that we own ourselves.

“I am my private property, and you are yours,” he wrote. Illegitimate, coercive and non-voluntary intrusions on individuals, he argued, are fundamentally immoral. Whether it’s a criminal assaulting you physically or the state dictating what you can or can’t do with our own life, Williams always put the dignity and integrity of the individual first and foremost.

Though there will only be one Walter E. Williams, his ideas must endure forever.

Published December 2, 2020 at ocregister .com. Reprinted here December 10, 2020 for educational purposes only. May not be reproduced on other websites without permission from the Orange County Register.

1. Choose 2 of Walter Williams’ columns posted at StudentNewsDaily over the years and answer the questions found at the bottom of each commentary:

(See all of Dr. Williams’ columns at his personal page walterewilliams.

2. Watch a clip from a C-Span interview “In Depth with Walter Williams”

Do you agree or disagree with Dr. Williams’ assertions about education? Explain your answer. – Then ask a parent the same question.

CHALLENGE: Get a copy and read “Up from the Projects” – Walter Williams’ autobiography (or any of his other books)