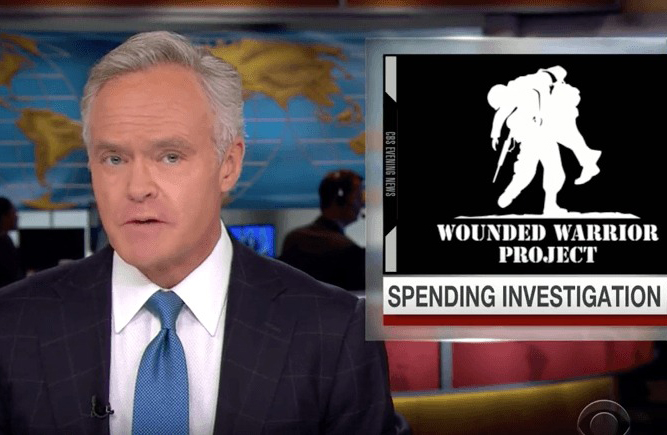 (CBS News) – A CBS News investigation into a charity for wounded veterans, the Wounded Warrior Project, looks into how the charity spends its donation money.

What caught [CBS’] attention is how the Wounded Warrior Project spends donations compared to other long-respected charities.

For example, Disabled American Veterans [a great organization] spends 96 percent of its budget on vets. Fisher House devotes 91 percent. But according to public records reported by “Charity Navigator,” the Wounded Warrior Project spends 60 percent on vets.

Where is the money is going?

In its commercials, Wounded Warrior Project appeals to the American public’s generosity, and it works. In 2014 alone the group received more than $300 million in donations.

“Their mission is to honor and empower wounded warriors, but what the public doesn’t see is how they spend their money,” said Army Staff Sergeant Erick Millette.

Millette came home from Iraq in 2006 with a bronze star and a purple heart — along with a traumatic brain injury and PTSD.

Initially, he admired the charity’s work, and participated in its programs. He took a job as a public speaker with Wounded Warrior Project in 2013. But after two years, he quit.

“[They are] using our injuries, our darkest days, our hardships, to make money. So [they] can have these big parties,” he told CBS News.

“[They got] a Mexican mariachi band in there, [and had] maracas made with [the] WWP logo, put them on every staff member’s desk. [They got] it catered and ha[d] a big old party,” he described.

CBS News spoke to more than 40 former employees who described a charity where spending was out of control.

Two of those former employees were so fearful of retaliation they asked that their faces not to be shown on camera.

“It was extremely extravagant. Dinners and alcohol, and just total excess” one employee explained. He continued, saying that for a charitable organization that’s serving veterans, the spending on resorts and alcohol is “what the military calls fraud waste and abuse.”

According to the charity’s tax forms, spending on conferences and meetings went from $1.7 million in 2010, to $26 million in 2014. That’s about the same amount the group spends on combat stress recovery — its top program.

Former employees say spending has skyrocketed since Steven Nardizzi took over as CEO in 2009. Many point to the 2014 annual meeting at a luxury resort in Colorado Springs as typical of his style:

About 500 staff members attended the four-day conference in Colorado. The price tag? About $3 million.

Wounded Warrior Project declined CBS News’ repeated interview requests for Nardizzi, but offered their Director of Alumni and a recipient of their services, Captain Ryan Kules.

Kules denied there was excessive spending on conferences. “It’s the best use of donor dollars to ensure we are providing programs and services to our warriors and families at the highest quality,” he said.

When asked why conferences were held at five-star resorts instead of cheaper options, Kules provided the same answer. “Like I said, it’s to make sure we are aligned and can build as a team. Be able to be able to provide the best quality services.”

Explaining why he is speaking out against Wounded Warriors’ lavish spending, Millette said, “WWP and those donor dollars trained me to speak and be a voice, and that’s exactly what I’m doing. I’m sorry, but I’ll be damned if you’re gonna take hard-working Americans’ money and drink it and waste it.”

Kules also told CBS News the charity did not spend $3 million on the Colorado conference, but he was not there and was unable to say what it did cost. He also denied that the charity spends money on alcohol or engages in any other kind of excessive spending.

1. What did a CBS News investigation discover about how the non-profit Wounded Warrior Project spends its donation money? (How does it contrast with such upstanding veterans’ organizations as Disabled American Vets and Fisher House?)

2. How much money did the Wounded Warrior Project raise in donations in 2014? – How much of that was not spent on the actual veterans?

3. The two former servicemen quoted by name for the CBS investigation of the charity Wounded Warriors Project are:

Army Staff Sergeant Erick Millette, who admired and worked as a public speaker for WWP from 2013 to 2015

Captain Ryan Kules, who currently works for WWP as Director of Alumni and was a recipient of their services

a) What does Sgt. Millette accuse Wounded Warrior Project of doing? (Why did he quit working for them?) Be specific.

b) How does Capt. Kules defend the charity’s lavish spending on employee get-aways?

4. a) In addition to Sgt. Millette, how many other former employees say the charity’s spending is out of control?
b) What examples did one of them give?

5. Former employees say spending has skyrocketed since Steven Nardizzi took over as CEO in 2009. Many point to the 2014 annual meeting at a luxury resort in Colorado Springs as typical of his style: “He rappelled down the side of a building at one of the all hands events. He’s come in on a Segway, he’s come in on a horse.” About 500 staff members attended the four-day conference in Colorado which cost about $3 million.
By how much did spending on conferences and meetings FOR EMPLOYEES increase from 2010 to 2014?

6. Why do you think Mr. Narduzzi refused to speak to CBS News about the allegations?

7. Watch the videos under “Resources.” Do you think Sgt. Millette and the 40 former employees are telling the truth? Explain your answer.

An organization that spends 96% of its donations on the veterans it exists to serve is Disabled American Veterans.  Many cities have chapters of the DAV. Visit the Broken Arrow, OK facebook page.