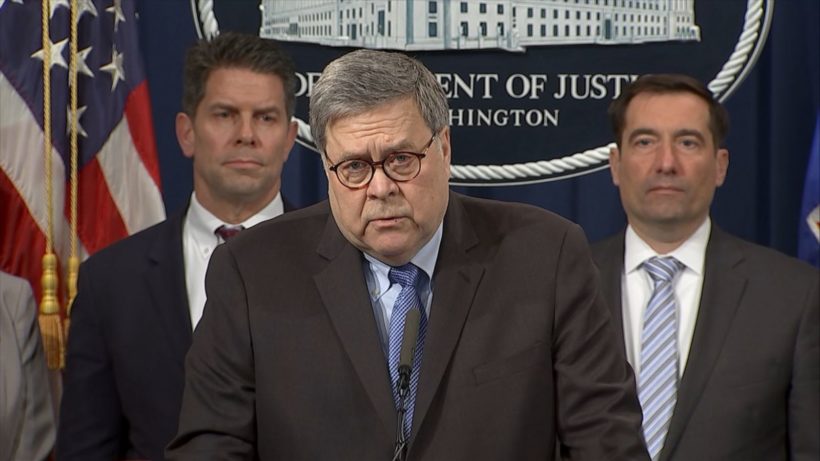 Attorney General William Barr announced an update in the investigation of the deadly shooting last month at a naval base in Pensacola, Fla. He said Monday: "This was an act of terrorism."

(from BBC News) — Twenty-one members of the Saudi military are being expelled from the US after a Saudi cadet carried out a mass shooting at an air base last month.

The servicemen are not accused of aiding the 21-year old Saudi Air Force lieutenant.

Three sailors were killed and eight wounded in the December 6 attack by the Saudi air force terrorist. Training for Saudi servicemen was put on hold in the US after the attack.

Mr. Barr told a news conference on Monday that the shooting at Naval Air Station Pensacola was an “act of terrorism.” 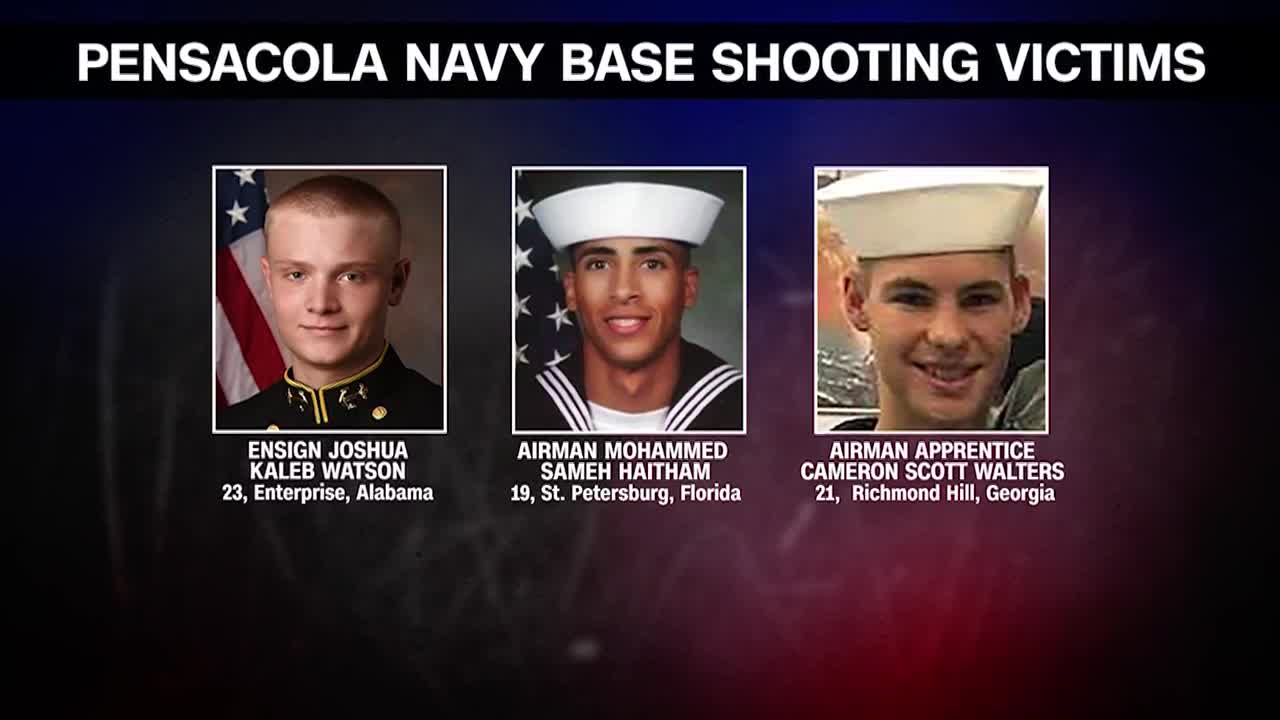 He said he had asked Apple to unlock two iPhones that belonged to the gunman, who was killed by police in the attack. The gunman fired a bullet into one phone in an effort to destroy it, Mr. Barr said, but FBI investigators were able to restore the device.

“It is very important to know with whom and about what the shooter was communicating before he died,” but the devices are “engineered to make it virtually impossible to unlock them without the password,” Barr said.  “We have asked Apple for their help in unlocking the shooter’s iPhones. So far Apple has not given us any substantive assistance.”

[The FBI obtained court approval on probable cause to search the devices.] However, Apple only gave the FBI iCloud data from the attacker’s online account, the New York Times reported, but refused to unlock the phone, saying it would undermine their own encryption software.

The tech firm has clashed previously with the FBI over requests to unlock iPhones belonging to terrorists. In 2016, a Pakistani-American and his Pakistani wife murdered 14 people and injured 22 others in San Bernadino, California. A similar clash over the terrorist’s phone was resolved when the FBI found a way to unlock it without help from Apple. [Aided by the unnamed group, FBI technology experts were able to open the iPhone without jeopardizing its contents. A federal law enforcement official, speaking on condition of anonymity, said the information stored on the phone was extracted.]

Mr. Barr said that initial reports that other Saudi cadets had filmed the attack as it unfolded were inaccurate. The gunman had arrived at the scene of the shooting alone, he said.

“While one of individuals had a significant number of images, all the rest had one of two images, in most cases posted in a chat room by some other person or received over social media,” said Mr. Barr.

He said the 21 cadets were being disenrolled and returned home on Monday. The Saudi cadets, he said, had fully co-operated with FBI investigation.

Mr. Barr also said the Kingdom of Saudi Arabia had given “complete and total” support to the inquiry. Saudi officials had determined the cadets’ conduct was “unbecoming an officer in the Saudi Royal Air Force and Royal Navy,” said the attorney general.

He added that the expelled cadets had not been charged with any crime in the US, but might face prosecution back home. There are more than 850 Saudi military cadets conducting training in the US.

Investigators say the attacker, Second Lt Mohammed Alshamrani, had shown videos of violence to his colleagues at a dinner party before the attack. The 9mm handgun he used was purchased lawfully.

“Obviously Pensacola showed that there had been errors in the way that we vetted,” said Mr. O’Brien. “And I think out of an abundance of caution Secretary [of Defense Mark] Esper’s taking these actions to protect our service men and women.”

The Pensacola base has long offered aviation training to foreign military forces. Saudi pilots started training there in 1995, alongside other personnel from Italy, Singapore and Germany. [At the time of the Pensacola shooting, there were about 850 Saudi military personnel training at various locations in the US, part of a total of about 5,000 from 29 NATO nations and other allies.]

After last month’s attack, the base’s commanding officer said that about 200 international students were enrolled in programs in the Pensacola base. According to its website, the base employs more than 16,000 military and 7,400 civilian personnel.

Published at bbc .com. Reprinted here for educational purposes only. May not be reproduced on other websites without permission from BBC News.

1. a) How many Saudi servicemen were kicked out of the U.S. this week?
b) For what offenses were the Saudis expelled from the U.S. military training program for foreign service members?

2. How many Americans did the Saudi terrorist kill and/or wound?

3. a) What did U.S. Attorney General William Barr ask Apple to do? For what reason did he ask the company to do so?
b) Barr noted that the FBI had obtained court approval on probable cause to search the devices. How did Apple respond to the government’s request for access to the dead Saudi terrorist’s phone?

4. a) How many military personnel from allied countries are currently receiving training from the U.S. military in bases across the U.S.?
b) How many Saudis are currently receiving training from Americans at bases across the U.S.?
c) White House National Security Advisor Robert O’Brien said, ”Obviously Pensacola showed that there had been errors in the way that we vetted.”
Reports following the terrorist attack stated that the U.S. allowed Saudi Arabia to do the in-depth vetting of the service members they sent here for training.
sOne reader said “There is no way for us to ensure the personnel they are sending here do not have jihadi sympathies. Despite being a foreigner, this terrorist was able to legally buy a gun for “hunting” purposes and murder Americans on base, who are not permitted to carry firearms. Why are we training these guys in the U.S.? All Saudis should be sent home permanently. End the program for them. Remember, most of the 9/11 terrorists were Saudis.”
What do you think of this assertion? Explain your answer.

5. The LA Times reports: Tech companies and governments have clashed for years over balancing law enforcement access and user privacy. The latest encryption technology used on iPhones and other smartphones has increased this tension because the devices have become a lot harder for outside experts to hack into.
Attorney General Barr said on Monday, “This situation perfectly illustrates why it is critical that investigators be able to get access to digital evidence once they have obtained a court order based on probable cause. We call on Apple and other technology companies to help us find a solution so that we can better protect the lives of Americans and prevent future attacks.”
a) Do you agree with AG Barr? Explain your answer.
b) Apple promotes its privacy feature. What should the company do?
c) Do you think Apple tech experts really can’t access our iPhones?
d) How important do you think it is to access the Saudi terrorist’s phone?