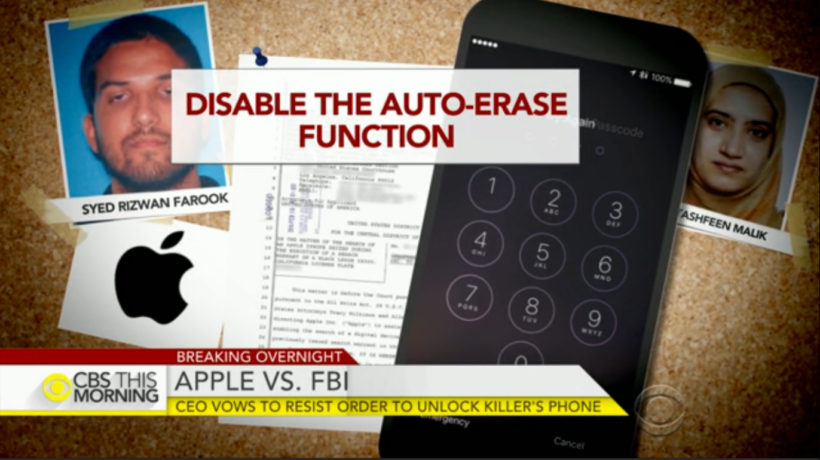 (by George Brown and CNN Wire at WREG News 3 Memphis) — Apple has responded to a California judge’s order to help the FBI break into the phone of one of the San Bernardino terrorists with a public letter saying it opposes such a move and will fight the order, labeling the instruction “an overreach by the U.S. government.”

[The court has given Apple five business days to contest the order if it believes that assisting the FBI in this manner would be “unreasonably burdensome.”] Apple’s CEO Tim Cook on Tuesday released a “message to our customers,” in which he asserts that complying with the federal judge’s order would entail building “a backdoor to the iPhone,” creating “something we consider too dangerous to create.”

“The government is asking Apple to hack our own users and undermine decades of security advancements that protect our customers — including tens of millions of American citizens — from sophisticated hackers and cybercriminals,” the letter reads. … “No reasonable person would find that acceptable.”

The letter called for a public discussion on the federal judge’s order, saying the company was “challenging the FBI’s demands with the deepest respect for American democracy and a love of our country.” Apple also stated, “We believe it would be in the best interest of everyone to step back and consider the implications.”

[U.S. Magistrate Judge Sheri Pym] granted the Justice Department’s request for help unlocking the phone of terrorist Syed Rizwan Farook, who, along with his wife Tashfeen Malik, murdered 14 people from his office at the County Health Department in San Bernardino, California, in December. The couple was later killed in a shootout with police.

[The phone is actually owned by Mr. Farook’s former employer, San Bernardino County. The county has given investigators permission to search the phone, but county officials don’t know Mr. Farook’s passcode, according to federal prosecutors.

“Despite both a warrant authorizing the search and the phone owner’s consent, the government has been unable to complete the search because it cannot access the iPhone’s encrypted content,” the government filing says. “Apple has the exclusive technical means which would assist the government in completing its search, but has declined to provide that assistance voluntarily.”]

…Apple’s operating systems include an auto-erase function that, when enabled, would result in the information on the device becoming permanently inaccessible after 10 failed attempts at inputting the passcode, the government wrote in documents seeking the order. …

[The Justice Department believes Apple has the technical means to bypass the security features, which should allow investigators to keep guessing the password until they guess correctly, but so far the company has refused to do so, the filing says.]

Apple said that the FBI had requested that the tech giant produce a new version of the iPhone operating system which circumvented key security features to install on Farook’s phone.

“In the wrong hands, this software – which does not exist today – would have the potential to unlock any iPhone in someone’s physical possession,” Cook’s letter said.

While the FBI did not describe this as a backdoor into the iPhone, complying with the request would “undeniably” create one, and limiting its use to the Farook case could not be guaranteed, it said.

“The government suggests this tool could only be used once, on one phone. But that’s simply not true. Once created, the technique could be used over and over again, on any number of devices,” Cook also asserted in his letter.

“The same engineers who built strong encryption into the iPhone to protect our users would, ironically, be ordered to weaken those protections and make our users less safe,” the letter continued, adding it could find “no precedent for an American company being forced to expose its customers to a greater risk of attack.”

Apple said in the letter that it had “great respect for the professionals at the FBI, and we believe their intentions are good.” “We have no sympathy for terrorists,” it said, adding that it did not oppose the order lightly.

But it said that the FBI was proposing “an unprecedented use” of law dating from 1789 to justify an expansion of its authority, the implications of which were “chilling.” “If the government can use the All Writs Act to make it easier to unlock your iPhone, it would have the power to reach into anyone’s device to capture their data,” it said.

“The government could extend this breach of privacy and demand that Apple build surveillance software to intercept your messages, access your health records or financial data, track your location, or even access your phone’s microphone or camera without your knowledge.”

1. For what reason does Apple CEO Tim Cook say his company will fight the federal judge’s ruling?

2. In refusing to comply with a federal judge’s ruling, what does Apple accuse the government of trying to force Apple to do?

3. What does Mr. Cook call for in his public letter posted to the company’s website on Wednesday?

4. A federal judge has granted the Justice Department’s request. If San Bernadino County owns Farook’s work phone the FBI needs to access and has given them permission to access it, why haven’t they done so?

5. What does Apple say the software the Obama administration wants them to create would do?

6. Some reader comments on this article:

a) Many have said this is not simply a privacy vs. security issue.  What do you think? Explain your answer.
b) Ask a parent the same question.

From a CBS News report:

There may be critical evidence on the phone, the government argues in the filing, because the data wasn’t backed up to cloud storage for a month and a half before the attack.

“Evidence in the iCloud account indicates that Farook was in communication with victims who were later killed during the shootings perpetrated by Farook…and toll records show that Farook communicated with Malik using the subject device,’’ the filing says.

“Farook may have disabled the automatic iCloud backup function to hide evidence,” it adds. “There may be relevant, critical communications and data around the time of the shooting that has thus far not been accessed, may reside solely on the subject device, and cannot be accessed by any other means known to either the government or Apple.’’

The filing also says San Bernardino County officials have told investigators the automatic backup feature was turned on when the phone was given to Farook. Before Oct. 19, backups occurred “with almost weekly regularity,” it says.

Have you ever read any short stories by American author O. Henry? For one of our favorites, read:  “A Retrieved Reformation”