US Deploys Warships as North Korea Prepares to Launch Missile 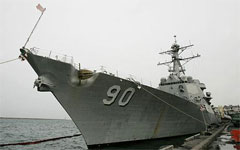 (by Peter Foster, Telegraph.co.uk) BEIJING – The US has deployed two warships with anti-missile capabilities in the waters off Japan as tensions mount over North Korea’s plans to test-fire a long-range ballistic missile capable of striking Alaska.

The deployment comes as America, Japan and South Korea threaten North Korea with ‘serious consequences’ if it proceeds with plans to conduct the missile test in defiance of a 2006 UN resolution [demanding that Pyongyang abandon its nuclear-weapons program].

North Korea, which has informed international agencies of its plan to fire the missile between April 4 and 8, says the launch is a “satellite test” which it is entitled to make under international law.

Recent satellite imagery has shown that North Korea has now assembled two stages of the three-stage Taepodong-2 missile on a launch pad in the country’s northeast. Experts estimate that missile could be ready to fire within four days.

Japan has threatened to shoot down the missile if it crosses over Japanese territory, a move which Pyongyang has already said it would consider an “act of war”.

[U.S. Secretary of State] Hillary Clinton has warned any launch would threaten to end the six-party talks over Pyongyang’s nuclear weapons program. The talks have been stalled since December in a dispute over how to verify its disarmament.

“This provocative action, in violation of the United Nations mandate, will not go unnoticed and there will be consequences,” she said while on a visit to Mexico, warning that the US would put the issue before the UN Security Council for additional sanctions.

It is unclear if China, Pyongyang’s only major ally which has held talks with senior figures from both North and South Korea in the last week, would support a US move to deepen sanctions.

North Korea also continues to hold two Korean-American journalists who it arrested over a week ago after they strayed across North Korea’s border with China while on a reporting assignment.

The US Navy spokesman said the two destroyers – the USS McCain and USS Chafee – equipped with Aegis technology capable of tracking and destroying missiles had left Sasebo port in southwestern Japan. “I would say we are ready for any contingencies,” he added.

The approach launch is typical of the brinkmanship of North Korean diplomacy, analysts say, however relations on the Korean Peninsular now said to be at their lowest ebb for a decade.

A successful satellite launch would be both a blow to South Korea, which hopes to launch its own satellite later this year, and a huge fillip for Kim Jong-il, the North’s ailing dictator who was reported to have a had a stroke last year.

“A successful launch, coupled with international recognition of its nuclear capabilities, would also help secure the survival of the regime,” added Koh Yu-hwan, Dongguk University professor of North Korea studies in Seoul.

1. Define missile, ballistic missile and satellite as used in the article.

2. Which three countries have threatened North Korea with “serious consequences” if it proceeds with plans to conduct the missile test in defiance of a 2006 U.S. resolution?

3. How is North Korea attempting to justify its plan to launch a missile?

4. a) What warning has the Japanese government made to North Korea?
b) How did North Korea respond to Japan’s threat?

5. a) Define sanctions as used in para. 7.
b) How is Secretary of State Clinton reacting to North Korea’s plans?

6. Read the “Background” below on Non-proliferation and the history of the Six Party Talks. How do you think the U.S. should respond to North Korea’s missile launch?

NORTH KOREA’S NUCLEAR WEAPONS PROGRAM and THE SIX-PARTY TALKS: (portions of this informaiton are from wikipedia.org.)

Also, go to wsj.com for a graph detailing negotiations with North Korea.

Read more about North Korea and South Korea at CIA World FactBook. (NOTE: Both countries are listed under Korea.)

For a clear explanation of the history of North Korea’s nuclear program, read John Podhoretz’s commentary at NYPost.com.

Read an interview with John Bolton (former U.S. ambassador to the UN) at politico.com.