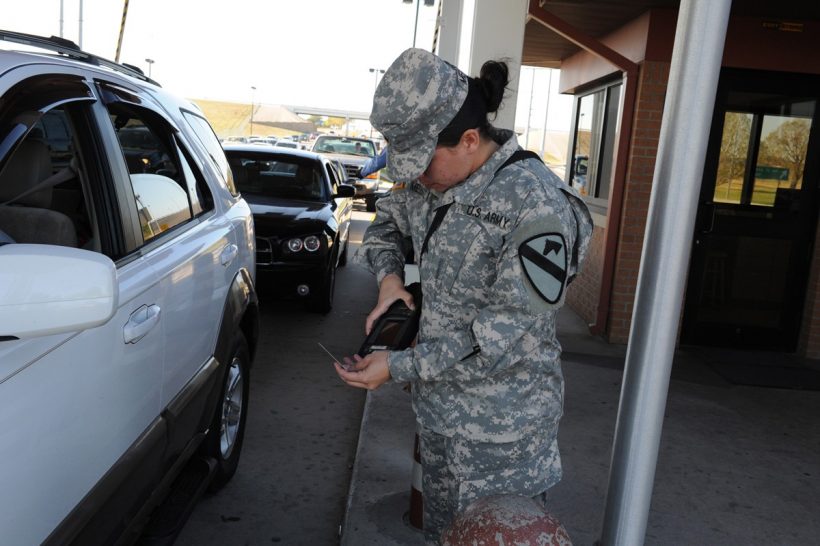 (by Ryan Morgan, American Military News) – The U.S. Army put out a call for facial recognition technology to help security guards at military bases and facilities quickly identify whether an individual approaching the gate is authorized to enter. The branch will accept proposals from April 14 through May 18.

The Army wants a system that can be used at all hours of the day and in a variety of weather conditions, to better identify who is driving up to base gates and military facilities, and more quickly process those authorized to enter.

The Army said, “The current effort would use existing technology to develop a facial recognition system that has the capacity to detect passengers in a moving vehicle and compare the captured image of the driver to a photo gallery of preapproved users. The results would be displayed to the guard with a photo of the driver indicating an access
granted or access denied response in time to allow uninterrupted vehicle traffic flow for approved users.”

The contract for the Recognition Biometric Camera System would be completed in three phases.

The first phase entails proposals to determine, if possible, the scientific, technical, and commercial merit and feasibility of various biometric recognition ideas.

In the second phase, 2 awards will be made to firms on the basis of their Phase I findings. Those firms will then begin the principle research and development phase, to produce a working prototype biometric recognition system. The program requires the firms to develop a system that can capture a facial image through the windshield of a vehicle approaching at a speed of no less than 5 mph and up to 10 mph. The system must be able to identify passengers with a 100 percent success rate.

The third and final phase will see a winning system implemented at various Army facilities.

The request comes as the military has seen several high-profile instances in which unauthorized individuals have either attempted or successfully gained access to military bases.

In February, an intruder was able to enter Joint Base Andrews in Maryland, the base of the presidential aircraft, Air Force One. According to a March investigative report, the intruder gained access to the base because of a guard who failed to check if the intruder was authorized to enter the base.

In September 2019, two Chinese Embassy officials sped past base security guards at a special operations base in Norfolk, Va. before being caught and eventually expelled from the U.S.

[UPI reports:  Redstone Arsenal, Ala, is currently is the only Army base in the United States using facial recognition technology.

“It is a safety measure for us,” Col. Glenn Mellor, Redstone Garrison Commander, told WZDX News in March.

“There’s no exchange of ID’s or anything else. You [the driver] don’t even have to roll down your window with facial recognition. It measures some data points on your face and allows you to roll through at about three to five miles an hour at the gate. So, you never even have to stop,” Mellor said].

Published at americanmilitarynews .com. Reprinted here for educational purposes only. May not be reproduced on other websites without permission.

2. How will the technology be used?

3. List all of the features the Army wants the technology to have.

4. How does the Army want developers to create the technology?

5. For what reason is the Army looking to acquire this technology?

6. The Army issued the call on its Small Business Innovation Research, or SBIR, which is a contract vehicle used for working with small businesses on phased, iterative development programs. What do you think of the Army’s practice of using contractors to submit proposals to develop the facial recognition technology they need? Is this the best way to acquire the technology the Army needs? Explain your answer.