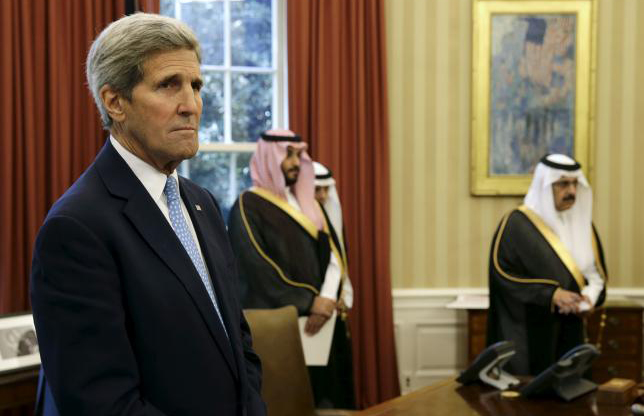 (by Felicia Schwartz in Washington and Anton Troianovski in Berlin) — The U.S. will boost the number of refugees it accepts from around the world to 100,000 annually, up from 70,000 now, as part of an effort to help Europe cope with a migration crisis, Secretary of State John Kerry said.

The increase would include at least 10,000 Syrian refugees that the White House has proposed admitting to the U.S. next year, Mr. Kerry said. Beyond that, however, details were scarce.

Some Republicans say the U.S. should concentrate its efforts on helping Syrians resettle in the region, rather than transport them far from home. Other critics have raised concerns about Islamic State or other militants outwitting the lengthy background checks each applicant undergoes to infiltrate the U.S. posing as refugees.

But Mr. Kerry said the U.S. move would be “in keeping with America’s best tradition as a land of second chances and a beacon of hope.”

Speaking in Berlin on Sunday alongside his German counterpart, Frank-Walter Steinmeier, he added that Germany’s welcome of hundreds of thousands of migrants this year served as an “example for the world.”

Mr. Kerry said that in fiscal year 2016, which starts in October, the U.S. would accept some 85,000 refugees, including the 10,000 Syrians the White House proposed earlier this month.

In 2017, the overall number would rise to 100,000, he said. That is likely to include more Syrians, but he didn’t give a specific number.

The U.S. announces refugee caps at the end of each fiscal year, which include regional limits. Most of the 70,000 refugees entering the U.S. this year were from Myanmar, Iraq and Somalia.

Europe’s migrant crisis has also given new urgency to finding a political solution to the 4½-year war in Syria, the source of many of the people flocking to Europe. More than four million Syrians have fled the country since 2011.

The Obama administration and our European allies have said Syrian President Bashar al-Assad must step down from power, but have said they are flexible on when that would happen. Mr. Kerry has urged Russia and Iran—Mr. Assad’s main international backers—to use their influence to get him to the negotiating table.

The U.S. and Russia resumed high-level defense contacts last week, amid a growing Russian military buildup in Syria, its longtime ally. Russia has recently moved fighter jets to a coastal basein the country, raising concerns in Washington about whether Moscow intended to take a more direct role in propping up Mr. Assad. …

Meanwhile, EU officials and advocacy groups as well as some Democratic lawmakers and former officials have called for the U.S. to move faster and to accept more Syrians. …

Secretary Kerry cautioned that it was difficult for the U.S. to take in refugees quickly because of counterterrorism laws passed in the wake of the Sept. 11, 2001 attacks.

“It takes longer than one would like and we cannot cut corners with respect to those security requirements,” Mr. Kerry said.

“In consultation with Congress, we will continue to explore ways to increase those figures while maintaining robust security,” Mr. Kerry said.

All applicants for refugee status go through extensive background checks that aim to screen out potential terrorist plotters, officials have said. For Syrians these checks take between 18 and 24 months.

Increasing the U.S. refugee cap doesn’t require congressional approval but will depend on the Republican-controlled Congress appropriating* (authorizing; giving) additional funds. Last year, the U.S. spent $1.1 billion to screen and resettle 70,000 refugees, including money for an orientation program to help adjust to life in the U.S. [*Article one, Section nine, Clause seven of the U.S. Constitution gives the U.S. House of Representatives the authority to designate how our tax dollars are spent:  The House has the power to appropriate money – to control the federal pursestrings.)]

President Barack Obama’s plans, however, have already run into resistance.

The Republican chairs of the House and Senate Judiciary committees on Sunday faulted the Obama administration for increasing the refugee cap without a plan to ensure terrorists don’t take advantage of it.

“ISIS and other terrorist groups have made it abundantly clear that they will use the refugee crisis to try to enter the United States,” said Sen. Chuck Grassley (R., Iowa) and Rep. Bob Goodlatte (R., Va.) “The administration has essentially given the American people a ‘trust me.’ That isn’t good enough.”

A spokesman for Sen. Jeff Sessions (R., Ala.), chairman of the Judiciary subcommittee on immigration, said that resettlement in the region was a better option.

“Financial and security considerations both lead to the same conclusion: the most responsible way to address the Middle East’s mass migration is to establish the goal of resettling the region’s migrants as close to their own homes as possible,” the spokesman, Stephen Miller, said.

The U.S. has provided more than $4.1 billion in humanitarian aid to groups in the region dealing with Syrian refugees. The hope is that they will be there temporarily and will be able to return home once the conflict is over.

But the U.N. refugee agency has begun to make larger referrals of Syrians to the U.S. and other countries after concluding that many would be unable to return in the near or medium term.

The 10,000 Syrians expected to be resettled in the U.S. next year will be taken from among the 17,000 cases the U.N. refugee agency has already referred to the U.S., officials have said.

This past week, a bipartisan group of 20 former U.S. officials released a letter calling on the Obama administration and Congress to admit 100,000 Syrian refugees next year.

1. What is the difference between a refugee and a migrant and/or immigrant? Be specific. (See the link under “Resources” below)

2. a) How is the Obama administration changing the number of refugees we accept annually? Be specific about the details provided by Secretary of State John Kerry.
b) Compare the number of Syrians we will accept with the number previously taken in.

3. Why do some Republican lawmakers (and many Americans) oppose this plan? What alternative do some suggest? Be specific.

4. a) How does Secretary Kerry address these concerns?
b) How confident are you in these assurances?

5. Increasing the number of refugees accepted per year does not require Congressional approval. What will the Obama administration need to implement the increased number?

6. How much money has the U.S. already given to aid groups in the region dealing with Syrian refugees (with the hope that they will be there temporarily and will be able to return home once the conflict is over)?

Europe’s migrant crisis has also given new urgency to finding a political solution to the 4½-year war in Syria, the source of many of the people flocking to Europe. More than four million Syrians have fled the country since 2011.

a) What does Secretary Kerry plan on doing at the UN General Assembly this week to address this crisis?

b) How effective do you think Secretary Kerry’s attempts will be?

c) The purpose of the U.N. (from its website) is “to bring all nations of the world together to work for peace and development, based on the principles of justice, human dignity and the well-being of all people.”
The UN Security Council’s role in international collective security is defined by the UN Charter, which authorizes the Security Council to investigate any situation threatening international peace; recommend procedures for peaceful resolution of a dispute; call upon other member nations to completely or partially interrupt economic relations as well as sea, air, postal, and radio communications, or to sever diplomatic relations; and enforce its decisions militarily, or by any means necessary.
How effective do you think the UN is in fulfilling its purpose?

8. The richest Gulf Arab states (Saudi Arabia, the United Arab Emirates, Kuwait, Bahrain, Oman and Qatar) are U.S. allies.  These countries are also the diplomatic and financial sponsors of Syria’s rebel groups and are not taking any refugees.
While it’s true that the Gulf States have previously allowed thousands of Syrians to come on work visas, many Syrians say they face severe restrictions in these countries. Some have decided they would rather risk the difficult road to Europe. “I will live here for five years, ten years, and then what?” says Dahlia, a Syrian who fled her home in Aleppo and joined relatives in the Gulf city-state of Dubai. “You never belong, you never feel you are safe, your residency can be canceled at any time and then what? Go where?”
Citizenship is not an option, even for workers who stay for decades.
What do you think the Obama administration should ask the Gulf Arab states to do in response to this crisis?

9. Of the presidential candidates, only one of 22 contenders – former Maryland governor Martin O’Malley, a Democrat, said that the US should take in more refugees and put forward a specific number. In a statement, Gov. O’Malley called on the government to accept 65,000 refugees from Syria over the next year. “If Germany – a country with one-fourth our population – can accept 800,000 refugees this year, certainly we – the nation of immigrants and refugees – can do more,” O’Malley said in a statement.
a) What do you think of Gov. O’Malley’s assertion? Explain your answer.

b) Wisconsin governor Scott Walker, a Republican, suggested that no additional refugees should be taken in until the US contends with the threat posed by the Islamic State. “What we should be doing is dealing with ISIS. Until we start dealing directly with ISIS, we’re avoiding the core of the problem,” Walker said in response to a question by the Guardian during a campaign stop in New Hampshire. “The problem is that ISIS is running amok in these parts of the world. The United States needs to step up and deal with it.”
What do you think of Gov. Walker’s assertion? Explain your answer.

c) Several campaigns, including those of top contenders such as Democratic frontrunner Hillary Clinton and her closest challenger, Bernie Sanders, and Republicans Jeb Bush and Marco Rubio, did not respond to repeated requests for comment on the specific question of whether the US should accept more refugees.
Why do you think this is so?

d) Ask a parent to answer the questions in #9. Compare your answers.

U.S. immigration law is very complex, and there is much confusion as to how it works. The Immigration and Naturalization Act (INA), the body of law governing current immigration policy, provides for an annual limit of 675,000 permanent immigrants from around the world, with certain exceptions for close family members.

Congress and the President determine a separate number for refugee admissions.  (From American Immigration Council)

What is the difference between a migrant and a refugee?
Read an explanation: studentnewsdaily.com/migrant-vs-refugee