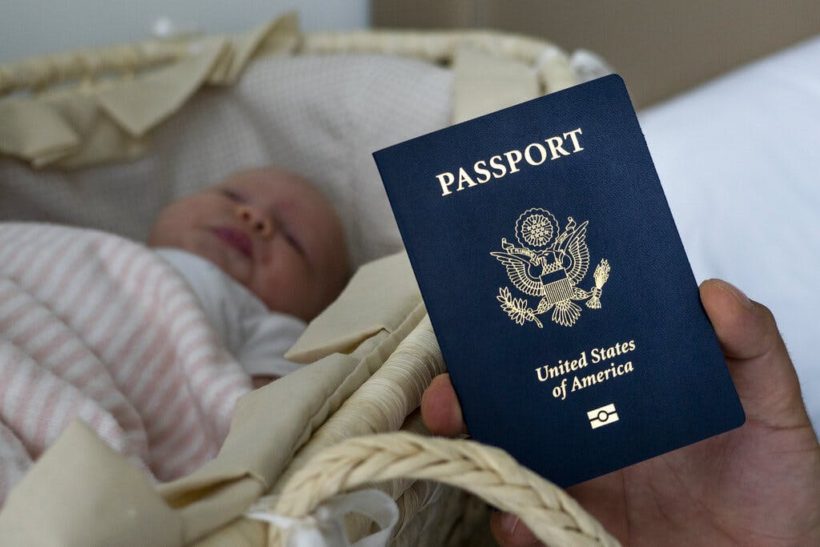 Denis Wolok, the father of 1-month-old Eva, shows the child's U.S. passport in Hollywood, Fla. Every year, hundreds of pregnant Russian women, such as Wolok's wife, Olga Zemlyanaya, travel to the U.S. to give birth so that their child can acquire all the privileges of American citizenship. (Photo: Iuliia Stashevska, AP)

Birth tourism is the practice of traveling to another country for the purpose of giving birth in that country. The main reason for birth tourism is to obtain citizenship for the child in a country with birthright citizenship. (wikipedia)

By 2015, at least 500 companies offered “birth tourism” services in China. The companies coach pregnant women on how to deceive U.S. immigration authorities so they can enter the U.S. for the sole purpose of giving birth so their child will be given American citizenship. They then return to China. The main attraction: When children born in the United States turn 21, they can sponsor their parents to become legal U.S. residents so the family can emigrate to the U.S.

(by Don Jacobson, UPI) – To [end] what it called “endemic abuses,” the Trump administration issued a new rule Thursday to deny U.S. entry to pregnant foreign women who want to have babies in the United States — so that the newborns receive automatic citizenship.

The White House said the rule aims to protect “the integrity of American citizenship” by ordering the State Department to deny visas to women who intend to enter the United States for “birth tourism” reasons.

Officials said since “birth tourists” usually apply for temporary “B” visas, those will no longer be given to foreign women suspected of [visiting the U.S. with] such a motive.

Calling birth tourism a “glaring loophole” in the U.S. immigration system, the White House said the rule change will “ultimately protect the United States from the national security risks created by this practice.”

In a statement, the White House Press Secretary wrote:

Beginning January 24, 2020, the State Department will no longer issue temporary visitor (B-1/B-2) visas to aliens seeking to enter the United States for “birth tourism” – the practice of traveling to the United States to secure automatic and permanent American citizenship for their children by giving birth on American soil.

This rule change is necessary to enhance public safety, national security, and the integrity of our immigration system.

The birth tourism industry threatens to overburden valuable hospital resources and is rife with criminal activity, as reflected in Federal prosecutions.

Closing this glaring immigration loophole will combat these endemic abuses and ultimately protect the United States from the national security risks created by this practice.

It will also defend American taxpayers from having their hard-earned dollars siphoned away to finance the direct and downstream costs associated with birth tourism.

The integrity of American citizenship must be protected.

The rule does not, however, indicate how U.S. immigration officials will identify “birth tourists” or give criteria for such classification.

A cable to U.S. consular offices says officials cannot directly ask applicants if they are pregnant unless there is a “specific articulable reason,” CNN reported. The new policy will take effect Friday, the report added.

President Donald Trump has harshly criticized birthright citizenship, and said last summer he was seriously considering executive action to end the practice. Some Republican lawmakers pushed back against the idea, arguing that such a change can only be made with a constitutional amendment. [However, in October 2018, Sen. Ted Cruz said he has long supported ending birthright citizenship and that it “encourages people to break the law.” He said it’s unclear how the policy could legally be eliminated, though.

“I suspect that whatever method [President Trump] uses will be challenged in court,” he said. “Ultimately the courts will sort out the proper mechanism. But I think as a policy matter, ending birthright citizenship makes a lot of common sense.”].

1. What is birth tourism?

2. What rule has the Trump administration ordered the State Department to implement in an effort to end birth tourism?

3. Why has the White House issued this rule?

4. For what reasons is it necessary to close this loophole, according to the White House? Be specific.

5. a) When will the rule take effect?

b) How will the rule be enforced?

6. Read the “Background” on today’s article page below the questions.  Then read a 2015 Daily News Article “Chinese flock to USA to give birth to U.S. citizens.” Based on this information, do you support or oppose the president’s attempt to close this loophole? Explain your answer.

b) Do you think if President Obama (or any of the potential Democratic presidential candidates) had issued the same rule, using the same reasons, your answer would have been different? Please explain.

c) Ask a parent the questions from a) and b).

CHALLENGE QUESTION: Read the commentary “Where does the concept of birthright citizenship come from?” and answer the questions on that page, below the article.

“Together, we will create an immigration system to make America safer, and stronger, and greater than ever before.” — President Donald J. Trump

Did you know? — The U.S. and Canada are alone among developed nations worldwide that automatically grant citizenship to people born within their territorial jurisdiction. Read an article from Sept. 2019: “Canada’s ‘Birth tourism’ rate has skyrocketed”

The map below is from a commentary “Where does the concept of birthright citizenship come from?” 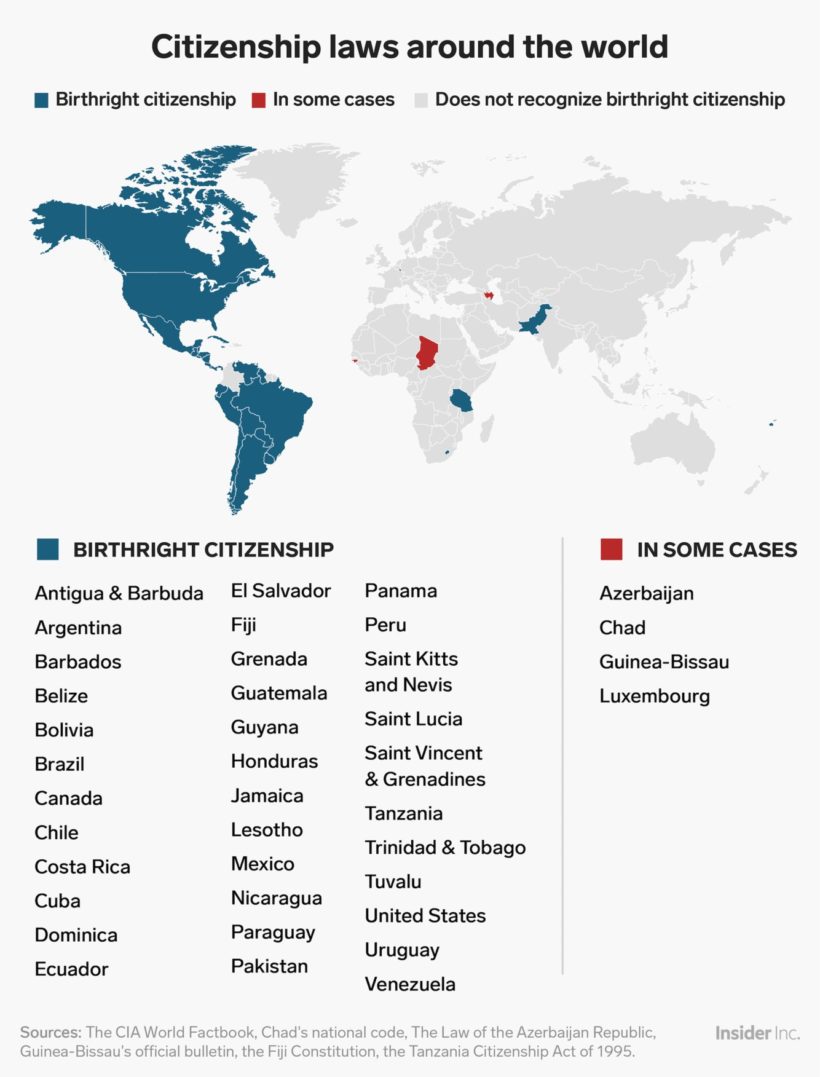