Chinese flock to USA to give birth to U.S. citizens 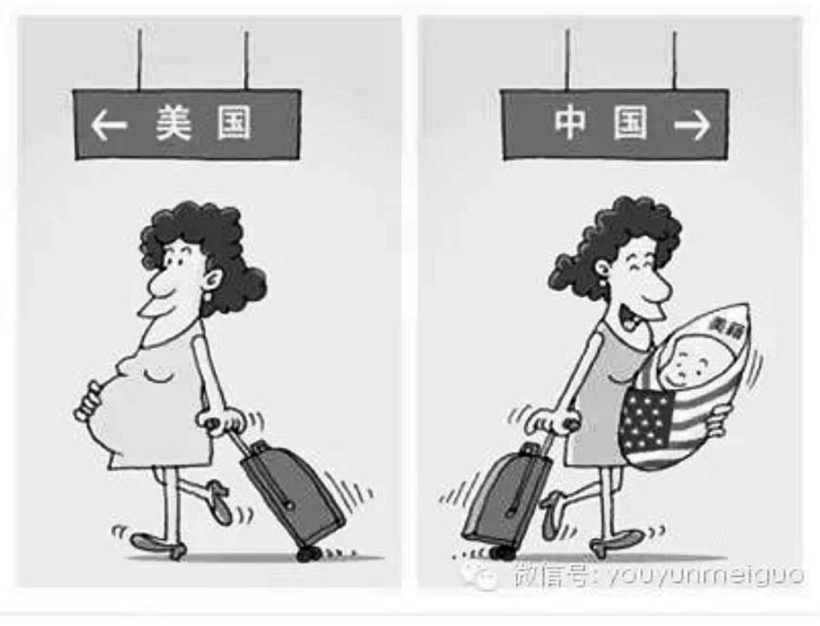 Image from a website that federal authorities say was used to recruit Chinese women to come to the U.S. to have their babies.

(by Calum MacLeod, USA Today) BEIJING – Business is booming here for companies that coach pregnant women on how to deceive U.S. immigration authorities so they can enter the United States for the sole purpose of giving birth to American citizens.

At least 500 companies offered “birth tourism” services in China last year, the Shanghai newspaper National Business Daily reported. While there are no official statistics, the number of Chinese citizens heading to the USA to give birth likely is in the tens of thousands each year. The cost of a trip, including medical expenses, runs from $20,000 to $80,000.

The business is legal in China, but the tactics for entering the USA are not. The women are coached to lie about the purpose of their visit by listing “tourism,” which makes it easier to get a visa. They also are told to hide their pregnancies when going through U.S. immigration and avoid declarations that they’re traveling for medical treatment.

The raids did not prompt crackdowns on the business in China. Six birth tourism companies, including ABC Baby and Precious Beauty Baby, told USA TODAY that business continues as normal. Six others declined comment.

There are legitimate reasons for Chinese citizens to travel to the United States to give birth, such as if one parent is American or a high-risk pregnancy requires medical care from a specialist.

The State department says there is no law barring foreigners from traveling to the U.S. for the purpose of giving birth. The tourism visa they usually travel on, known as a B-2 visa, allows foreigners to enter the U.S. for “medical treatment.”

As long as applicants are truthful about their intentions, prove they can afford their medical care, explain why they can’t have the procedure done in their home country and assert that they will abide by the time restrictions of their visa, such travel is generally allowed under U.S. law, according to the department.

However, since “birth tourists” are trying to skirt the law, the State department is adding staff to work on canceling visas of pregnant women who deceive immigration officials, said Gary Chodorow, a U.S. immigration lawyer based in China. He said the U.S. Embassy website should post explicit warnings that lying about the purpose of a visit could result in permanent ineligibility for a U.S. visa.

Despite the California raid and closer scrutiny by U.S. officials, “birth tourism” is expected to grow, said Chen Lei, manager of LApangbaba . com, a Shanghai-based firm that currently has 60 clients staying at three centers in Los Angeles.

The main attraction: When children born in the United States turn 21, they can sponsor their parents to become legal U.S. residents so the family can emigrate to America. “They admire America’s clean air and food safety,” Chen said. “(And) it’s a nation that respects human rights.”

After the California raids, some clients feared they would be targeted next, Chen said. “I relaxed them by saying those firms were targeted as they broke laws like claiming welfare to cut medical bills,” he said. “Most of my clients are rich. They don’t care about benefits.”

Most who participate in the birth tourism operations seek a better education and environment for their children, while hoping to evade China’s “one child” policy, Chodorow said.

Expectant mothers typically arrive two months before birth and stay one more for postpartum recovery. Then they return to China, where government officials don’t punish the parents for violating birth control rules because a second child is considered an American. At 18, however, the child must choose whether to be a U.S. or Chinese citizen.

Several Chinese celebrities have had American babies, and the hit 2013 Chinese movie Finding Mr. Right is about a Chinese woman who gives birth to a son in Seattle.

Birth tourism “is part of the cultural fabric now in China,” Chodorow said.

3. a) For what legitimate reasons can a non-citizen travel to the U.S. to give birth?
b) What must these pregnant women do to obtain the B-2 tourism visa?

4. a) What action has the U.S. State Department taken to prevent “birth tourism”?
b) What does U.S. immigration lawyer Gary Chodorow say the U.S. Embassy should do through their website?

5. Why do people do this? What are some of the reasons they would like to live in the U.S.?

6. Many of the people who go to the U.S. to give birth are having a second child, which violates China’s law that couples are only permitted to have one child. Why don’t Chinese authorities punish these mothers when they return to China?

7. The rule of law is the legal principle that law should govern a nation, as opposed to arbitrary decisions by individual government officials. All government officers of the United States, including the President, the Justices of the Supreme Court, state judges and legislators, and all members of Congress, pledge first and foremost to uphold the Constitution. These oaths affirm that the rule of law is superior to the rule of any human leader.
a) Considering the fact that the U.S. is governed by the rule of law, what obligation do you think the President and/or Congress has to address the issue of “birth tourism”?
b) The State department says there is no law barring foreigners from traveling to the U.S. for the purpose of giving birth. Should there be? or, if a non-citizen wants to come for better medical care, should it be with the stipulation that their baby will not automatically be given American citizenship?
c) What type of law, if any, should there be to address this practice?
d) The reporter writes, “The raids (in California) did not prompt crackdowns on the business in China.” Do you think President Obama should call Chinese President Xi Jinping and ask him to close down these businesses in China?