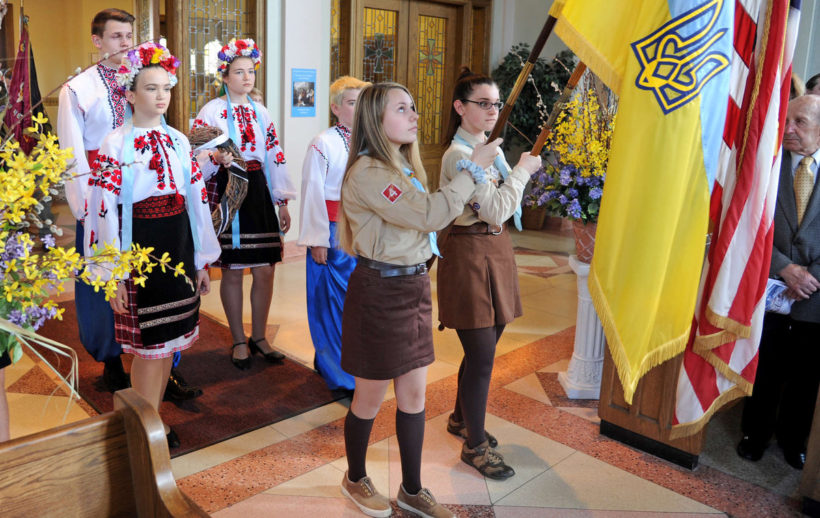 (by David O’Reilly, Philly.com) – Thirty years ago, a safety test at a nuclear power plant in the small city of Pripyat, Ukraine, turned into a disaster that the world, and the Ukrainian people, would not forget.

Cooling pumps failed. The reactor cores surged and exploded, blowing off the building’s roof. For nine days the ensuing meltdown at the power plant called Chernobyl spewed radioactive gases for miles around, forcing the eventual relocation of 120,000 residents.

On Sunday the Philadelphia region’s Ukrainian community gathered in prayer to remember the catastrophe at the Soviet-built plant, and to mourn Russia’s recent war on their nation of origin.

“Today we are gathered in solidarity to mark the tragedy of Chernobyl and to stand with the people of Ukraine,” Ulana Mazurkevich, president of the Ukrainian Community Committee of Philadelphia, told the 400 people gathered at the Ukrainian Catholic Cathedral of the Immaculate Conception in Northern Liberties.

The 90-minute service, which began with a procession and wreath-laying and ended with a release of white doves, included Catholic, Orthodox and Protestant speakers and many traditional songs and prayers. Most of the program was in Ukrainian.

Among the speakers was Valeriy Chaly, Ukraine’s ambassador to the United States.

He drew parallels between the nuclear plant meltdown that began April 26, 1986 and the Russian invasion and annexation [take-over] of Ukraine’s Crimean region in 2014.

“Chernobyl is very connected with the same kind of Soviet arrogance and aggression we are seeing now,” Chaly said in an interview before the service.

The Russian incursion “comes from the same Soviet style of thinking and culture,” Chaly said.

And while the meltdown at Chernobyl killed 30 plant workers and firefighters, he said, the conflict with Russia “has killed 2,700 [Ukrainian] soldiers, wounded more than 9,000, and has caused 10,000 civilian casualties.”

“It’s an attempt to bring us into their empire,” he said.

Like several of the program’s other speakers, Chaly said the people of Ukraine need financial and medical donations to cope with the consequences of the current conflict.

The service, while melancholy at times, was also a celebration of Ukrainian culture, with many of the participants wearing the region’s traditional dress.

The enormous cathedral, which features a gilded dome visible for miles, also resonates with imagery familiar to most Ukrainians. An enormous mosaic of Mary rises above the altar, which sits behind a soaring wood iconostasis, or altar screen, bearing dozens of gilded icons of saints and Jesus.

“We ask our Lord and Savior to remember those who perished as a result of the catastrophe,” a teenage girl read in remarks before the altar screen. Ukraine’s has been “a history full of tragic events,” she said.

She was followed by a teenage boy who deplored “the complete loss of law in the (Russian-backed) separatist area (of Ukraine), the detentions with no access to redress.” He asked God “to bless the entire Ukrainian nation.”

Much of the singing was accompanied by violins or traditional musical instruments. “That is the bandura,” an elderly woman explained, wiping away tears as she pointed to the broad, stringed instruments that two women played on the dais. Nataliya Turchyn, 45, told a visitor before the service that she was 15, living in the western Ukraine city of Lviv, when the Chernobyl plant exploded.

Four days later, the nation’s Communist leadership ordered all citizens to partake in traditional outdoor May Day celebrations, even though untold amounts of radiation were raining down on the nation.

“They wanted the world to think everything was normal,” recalled Turchyn, who lives in Philadelphia and teaches at a Ukrainian school. “They didn’t care about us. After that it was never the same. We never trusted them after we learned what they did.”

At the close of the service the congregants exited the cathedral and gathered around a bell tower topped by a steel orb and a gold cross. The choir of the Ukrainian Baptist Church sang in hushed tones as a cathedral priest sounded the bell, after which 27-year-old Yuriy Kravetz of New Holland, a breeder of doves, released 10 into the air. …

Afterward, Anna Maria Cyhan of Lansdale, Pennsylvania said she hoped the world will remember the Russian annexation [take-over] of Ukraine’s Crimea region the same way it remembers Chernobyl and support Ukraine’s efforts to reclaim its territory. Her husband, George Cyhan, agreed, and said of Russian president Vladimir Putin: “We can’t let Putin get away with it.”

Reprinted here for educational purposes only. May not be reproduced on other websites without permission from The Philadelphia Inquirer. Visit the website at philly .com.

2. How did Ukrainian-Americans commemorate the disaster in Philadelphia on Sunday? Be specific.

3. What did Valeriy Chaly, Ukraine’s ambassador to the U.S. say about the parallels between the Chernobyl disaster and Russia’s invasion and take-over of Ukraine’s Crimea region?

4. Two of the speakers at the commemoration were teenagers. What did each say about the disaster and Ukraine?

5. Why did Ukrainian-Anerican Nataliya Turchyn say Ukrainians did not trust Russia after the Chernobyl disaster?

6. From the last paragraph of the article: “Afterward, Anna Maria Cyhan of Lansdale, Pennsylvania said she hoped the world will remember the Russian annexation [take-over] of Ukraine’s Crimea region the same way it remembers Chernobyl and support Ukraine’s efforts to reclaim its territory. Her husband, George Cyhan, agreed, and said of Russian president Vladimir Putin: ‘We can’t let Putin get away with it.’”
a) Ask a parent: Do you agree with their sentiments? Please explain your answer.
b) Which presidential candidate do you think will best be able to deal with President Vladimir Putin of Russia? Explain your answer.
c) Ask your parent the same question.

OPTIONAL: Ask a parent or grandparent what he/she remembers about the Chernobyl disaster.

and from an Agence France-Presse report at Japan Times: