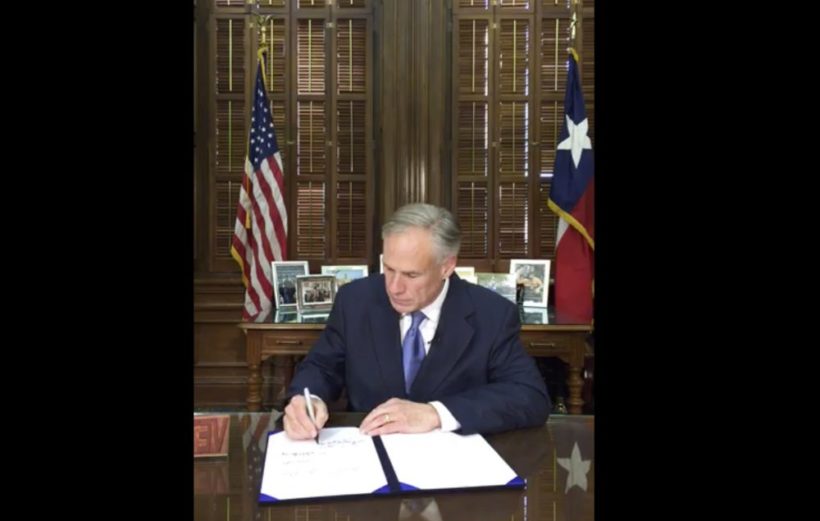 (from FoxNews with Associated Press) – Texas Gov. Greg Abbott signed a bill Sunday prohibiting the state’s cities and counties from enacting so-called “sanctuary” laws that prevent local law enforcement officers from inquiring about the immigration status of anyone they detain.

Abbott [broadcast the] signing of the bill on Facebook with no advanced public notice. He said Texas residents expect lawmakers to “keep us safe” and said similar laws have already been tested in federal court, where opponents have already been hinting the bill will be immediately challenged.

“Let’s face it, the reason why so many people come to America is because we are a nation of laws and Texas is doing its part to keep it that way,” Abbott said.

The timing of the signing caught Democratic lawmakers by surprise. Democratic state Rep. Cesar Blanco said it looked like Abbott “wanted to get ahead” of any protests surrounding the bill signing. Abbott spokesman John Wittman said they chose to sign the bill on a Facebook livestream because that’s “where most people are getting their news nowadays.” …

Teri Burke, executive director of the ACLU of Texas, said “we will fight this assault in the court” and the ballot box. Abbott said key provisions of the bill had already been tested at the U.S. Supreme Court, which struck down several components of Arizona’s sanctuary city law but allowed the provision permitting police to ask about immigration status.

Republicans say the bill is needed to ensure local jails [comply with] requests from federal officials to keep dangerous offenders behind bars.

The bill allows police to inquire about the immigration status of anyone they detain, a situation that can range from arrest for a crime to being stopped for a traffic violation. It also requires local officials to comply with federal requests to hold criminal suspects for possible deportation.

One of the bill’s most controversial provisions allows for criminal charges against city or county officials who intentionally refuse to comply with federal authorities’ attempt to deport people in the country illegally who already have been jailed on offenses unrelated to immigration. Elected officials could face up to a year in jail and lose their posts if convicted of official misconduct.

[The new measure would fine government entities up to $25,500 for each day the law is violated. It would also result in a misdemeanor charge for sheriffs, police chiefs and constables who fail to comply with detention requests and in removal from office for elected and appointed officials, Abbott’s office said.

“As Governor, my top priority is public safety, and this bill furthers that objective by keeping dangerous criminals off our streets,” Abbott said in a press release. “It’s inexcusable to release individuals from jail that have been charged with heinous crimes like sexual assault against minors, domestic violence and robbery.”]

Opponents blasted the Texas bill as a version of Arizona’s immigration crackdown law, SB 1070, which launched protests, lawsuits and national controversy in 2010. The Arizona law went to the U.S. Supreme court, which voided much of the measure but allowed the provision permitting police to ask [a person stopped] about immigration status.

But the Texas and Arizona bills are not identical. Whereas the Arizona law required police to try to determine the immigration status of people during routine stops, the Texas bill doesn’t instruct officers to ask. But it does allow Texas police to inquire whether a person is in the country legally, even if they’re not under arrest.

Every major police chief in Texas opposed the bill. Thomas Saenz, president of the Mexican American Legal Defense and Education Fund, said millions in the nation’s second most populous state will now be subjected to racial profiling and suggested that worried Hispanic residents will now be less willing to cooperate with police investigations. …

Texas doesn’t currently have any cities which have formally declared themselves sanctuaries for immigrants.

But Sally Hernandez, the sheriff of Travis County, which includes liberal Austin, angered conservatives by refusing to honor federal detainer requests if the suspects weren’t arrested for immigration offenses or serious crimes such as murder. Hernandez softened her policy after Abbott cut funding to the county, saying decisions would be made on a case-by-case basis. She has said she will conform to the state’s ban if it becomes law.

“We all support legal immigration. It helped to build America and Texas. Texas strongly supports the legal immigration that has been a part of our state from the very beginning. But, legal immigration is different from harboring people who have committed dangerous crimes. This law cracks down on policies like (those of) the Travis County Sheriff, who declared that she would not detain known criminals accused of violent crimes. Those policies are sanctuary city policies and won’t be tolerated in Texas. Elected officials and law enforcing agencies, they don’t get to pick and choose which laws the obey. There are consequences, deadly consequences, to not enforcing the law.”

The Associated Press contributed to this report. Reprinted here for educational purposes only. May not be reproduced on other websites without permission from FOXNews.

1. Define the following terms as used in the article:

3. Why do Republicans say the law is needed?

5. Why does every major police chief in Texas oppose the bill?

6. Why were conservatives upset with Travis County Sheriff Sally Hernandez?

7. What did Governor Abbott say about his reasons for signing the bill into law?

8. Teri Burke, executive director of the ACLU of Texas, said they will fight the bill in court and the ballot box. Do you think the Texas state assembly and Governor Abbott who signed the bill into law will be voted out of office in the next election? Explain your answer.

9. Do you think sanctuary cities are beneficial to the citizens of a city/state, to the “undocumented” immigrants, both, or neither? Explain your answer.

The Hill reported on Tuesday (Feb 21, 2017) that an overwhelming majority of Americans believe that cities that arrest illegal immigrants for crimes should be required to turn them over to federal authorities.

The poll shows that President Trump has broad public support in his effort to crack down on sanctuary cities.

As it stands, hundreds of cities across the nation — many with Democratic mayors or city councils — are refusing to do so.

Trump has signed an executive order directing Homeland Security Secretary John Kelly to find ways to withhold federal funding from these sanctuary cities until they enforce the law.

A Reuters analysis found the top 10 sanctuary cities in the U.S. receive $2.27 billion in federal funding for programs ranging from public health services to early childhood education. Many of these mayors would rather risk losing their federal funding for these programs than enforce federal immigration law.

One exception is Miami-Dade, which is the first locality to reverse its status as a sanctuary city:

The poll also revealed that 75% of voters favor increasing border patrol, while only 47% favor a wall [we do not know how the question was worded, as The Hill chose not to provide that information. It is believed that the disparity indicates what has been publicized in previous polls: that most people prefer various ways to secure the border, but say it does not need to be a physical wall].