ICE to continue arrests at courthouses 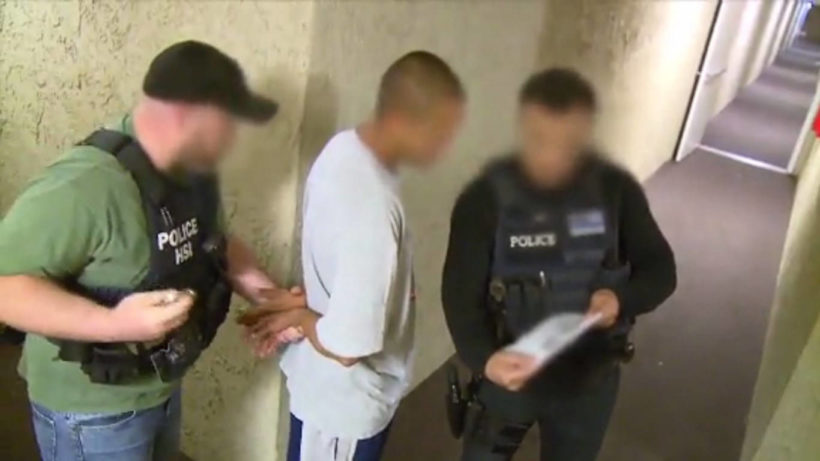 In a letter to Chief Justice Tani Cantil-Sakauye made public on Friday, U.S. Attorney General Jeff Sessions and Department of Homeland Security Secretary John Kelly gave no indication that agents would stop the arrests.

Sessions and Kelly criticized California officials for limiting the cooperation of state and local law enforcement officers with U.S. agents, preventing them from going to jails to pick up illegal immigrants arrested for other crimes [which is usually done]. The attorney general and DHS secretary criticized California and its jurisdictions for having policies of non-cooperation with ICE [U.S. Immigration and Customs Enforcement] — blaming those policies for the courthouse arrests.

“Some jurisdictions, including the State of California and many of its largest counties and cities, have enacted statutes and ordinances designed to specifically prohibit or hinder ICE from enforcing immigration law by prohibiting communication with ICE, and denying requests by ICE officers and agents to enter prisons and jails to make arrests,” Sessions and Kelly wrote.

“As a result, ICE officers and agents are required to locate and arrest these aliens in public places, rather than in secure jail facilities,” Sessions and Kelly wrote in the letter dated on Wednesday, using the acronym for Immigration and Customs Enforcement.

Kelly, whose Department of Homeland Security includes ICE, and Sessions, who as attorney general heads the Justice Department, are members of President Donald Trump’s Cabinet.

Since taking office in January, Mr. Trump has widened the net for illegal immigrants to be detained and removed from the country, in keeping with his White House campaign promise.

California law enforcement officers, including in Los Angeles and San Francisco, decline requests from ICE agents to hold illegal immigrants past their release dates in local jails so they can be transferred to federal custody. The stance of these law enforcement officials follows orders from the state’s two most recent Democratic attorneys general.

These and other “sanctuary” jurisdictions that opt not to cooperate with federal immigration agents / refuse to obey federal law have [been opposed by the majority of Americans]. Last Monday, Sessions threatened to withhold millions of dollars in U.S. funding for cities that fail to assist immigration authorities / refuse to uphold the law.

In their letter, Kelly and Sessions said agents make arrests at courthouses rather than other public places in part because visitors are screened for weapons before entering, as they are at jails.

They were responding to a letter sent two weeks ago by Cantil-Sakauye, who asked the two Cabinet officials to stop immigration agents from arresting illegal immigrants inside California courthouses.

[“Our courthouses serve as a vital forum for ensuring access to justice and protecting public safety,”] Cantil-Sakauye wrote in her letter earlier this month. “Courthouses should not be used as bait in the necessary enforcement of our country’s immigration laws.”

The presence of immigration agents in courthouses in the nation’s most populous state could undermine public trust in its judicial system, she said.

Her letter went on to say that immigration agents were “stalking undocumented immigrants” at courthouses, language that drew a sharp rebuke from Sessions and Kelly.

They said the use of the word “stalking” suggested criminal conduct. They said that was unwarranted because agents have full authority to arrest illegal immigrants – [that ICE is constitutionally and lawfully authorized to arrest anyone with probable cause.].

4. a) For what reason did the Chief Justice of California’s Supreme Court ask Sessions and Kelly to stop immigration agents from arresting illegal immigrants inside California courthouses?
b) How did they reply to this concern?

5. How did the Attorney General and DHS Secretary respond to the Chief Justice’s accusation that ICE agents were “stalking undocumented immigrants” at courthouses?

A survey from Harvard–Harris Poll found that 80 percent of voters say local authorities should have to comply with the law by reporting to federal agents the illegal immigrants they come into contact with.

Hundreds of cities across the nation — many with Democratic mayors or city councils — are refusing to do so [and have declared their cities to be “sanctuary cities,” which are cities which permit residence by illegal immigrants to help them avoid deportation.].

The Harvard–Harris Poll survey found strong support for an overhaul of the nation’s immigration laws, with 77 percent saying they support comprehensive immigration reform against only 23 percent who oppose.

“While there is broad support for comprehensive immigration reform, there is overwhelming opposition to sanctuary cities,” said Harvard–Harris co-director Mark Penn. “The public wants honest immigrants treated fairly and those who commit crimes deported and that’s very clear from the data.”

The finding is one of several in the survey that show President Trump has support for some of the…immigration proposals [strongly opposed by progressives] that were a hallmark of his campaign.

Are you surprised by this report? Explain your answer.

The United States Department of Justice (often referred to as the Justice Departmentor DOJ), is the U.S. federal executive department responsible for the enforcement of the law and administration of justice. The Department is led by the Attorney General, who is nominated by the President and confirmed by the Senate and is a member of the Cabinet. The current Attorney General is Jeff Sessions. (from wikipedia)

ATTORNEY GENERAL: (from the Department of Justice website justice.gov/ag/about-oag.html and wikipedia)

The Department of Homeland Security (DHS) Secretary is responsible for ensuring the safety and security of the United States from terrorist attacks and other disasters. (from allgov .com)

(from dhs.gov/secretary): The Secretary of Homeland Security leads the third largest Department of the U.S. government, with a workforce of 229,000 employees and 22 components including TSA, Customs and Border Protection, Immigration and Customs Enforcement, U.S. Citizenship and Immigration Services, FEMA, the Coast Guard, and the Secret Service. Under the Secretary’s leadership, DHS is responsible for: