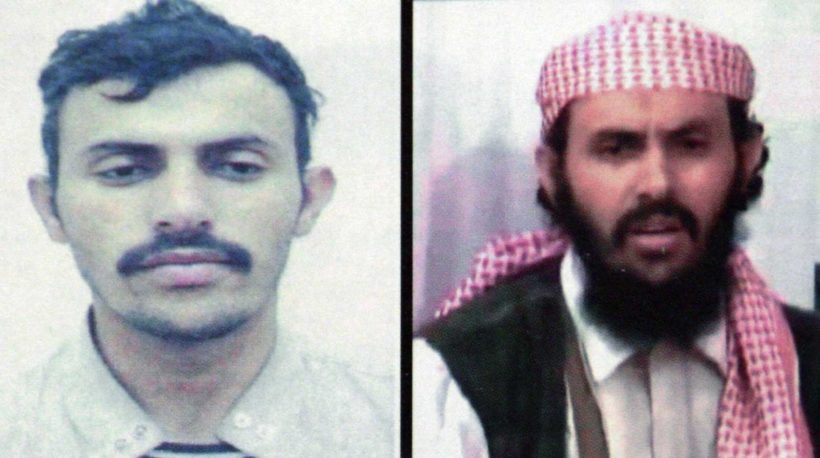 (Compiled from reports by Nikki Carvajal and Caroline Kelly at CNN and Scott Neuman at NPR) –President Trump on Thursday announced a successful U.S. counterterrorism operation that killed Qassim al-Rimi, the leader of a Yemen-based al-Qaeda affiliate who claimed responsibility for December’s deadly shooting at Naval Air Station Pensacola in Florida. [A 22 year-old Saudi Air Force officer, who was being trained there, opened fire inside a classroom at the base, killing three people and wounding two sheriff’s deputies before one of the deputies killed him. Eight others were also hurt.].

In a brief White House statement released late Thursday, the president said he had ordered the operation in Yemen “that successfully eliminated Qasim al-Rimi, a founder and leader of al-Qa’ida in the Arabian Peninsula (AQAP) and a deputy to al-Qa’ida leader Ayman al-Zawahiri.” [Al-Qaeda in the Arabian Peninsula, or AQAP, is a militant Islamist group primarily active in Yemen and Saudi Arabia that is part of the al-Qaeda network. It has long been considered the terrorist group’s most dangerous branch, for its attempts to carry out attacks on the US mainland.]

Rimi’s death was first reported more than a week ago by The New York Times, in an article attributing the information to three current and former U.S. officials who said he had been killed in a U.S. airstrike. President Trump appeared to confirm the operation when he retweeted an article citing the Times’ original reporting on Sunday.

Rimi, a Yemeni national, reportedly served as a top lieutenant in Afghanistan to 9/11 mastermind (al-Qaida founder) Osama bin Laden, who was killed in a U.S. raid in Pakistan in 2011.

The US government had offered a $10 million reward for information on Rimi.

…The death of the leader of AQAP is…a significant moment. Rimi had been a US target since early in Trump’s tenure [and by the Obama administration before him – see “Background” below]. Rimi was a target of a January 2017 raid on an al Qaeda compound in Yemen that led to the first US military combat death (U.S. Navy SEAL William Ryan Owens) under the President, a senior US military official told CNN at the time.

Rimi taunted Trump and condemned the operation in an 11-minute recording days after the raid, saying that “the new fool of the White House received a painful slap across his face.”

Rimi’s “death further degrades AQAP and the global al-Qa’ida movement, and it brings us closer to eliminating the threats these groups pose to our national security,” President Trump said in a statement released on Thursday, concluding with:

“The United States, our interests, and our allies are safer as a result of his death. We will continue to protect the American people by tracking down and eliminating terrorists who seek to do us harm.”

Rimi, formerly AQAP’s military chief, reportedly became the group’s leader following a 2015 drone strike that killed Nasir al-Wuhayshi. Rimi issued a video soon afterward calling supporters to attack the United States, urging that “all of you must direct and gather your arrows and swords against it.”

Many observers have considered AQAP among the most dangerous, if not the most dangerous, branch of al Qaeda since its formation in 2009. The group claimed responsibility for the 2015 attack on the offices of French magazine Charlie Hebdo in Paris that killed 12 people, though experts could not confirm the group was behind the attack.

The US has sought to prevent al Qaeda from exploiting the chaos of Yemen’s civil war to establish a haven, but the number of US military strikes has declined sharply over the last few years.

Published at CNN .com (Updated 6:32 AM ET, Fri February 7, 2020) and NPR on Feb. 7. CNN’s Jim Sciutto, Barbara Starr, Zachary Cohen, Euan McKirdy, Eli Watkins and Ryan Browne contributed to the CNN report. Reprinted here for educational purposes only. May not be reproduced on other websites without permission.

3. What do you learn about al-Rimi from this article?

4. Why is the killing of al-Rimi signifiant?

5. What did President Trump say in a statement released Thursday about the elimination of al-Rimi?

6. Read the “Background” and watch the videos under “Resources” below. During his State of the Union address, President Trump said, “Our message to the terrorists is clear. If you attack our citizens, you forfeit your life.”
a) What do you think of this message? Explain your answer.
b) Ask a parent the same question and discuss your answers.

What we know about Qassim al-Rimi:

AQAP is responsible for several terrorist plots, including:

The White House described Rimi (Raymi) as AQAP leader and “deputy” to overall al-Qaeda leader Ayman al-Zawahiri. It said he joined al-Qaeda in the 1990s and worked for Osama bin Laden in Afghanistan.

Rimi was named AQAP leader in 2015, after his predecessor Nasir al-Wuhayshi was killed in a U.S. drone strike in eastern Yemen. (Wuhayshi had been leader since AQAP’s formal launch was announced in 2009, and like Rimi after him, was also named a deputy to al-Zawahiri.)

The State Department designated AQAP as a foreign terrorist organization in 2010, and months later designated Rimi, then its “senior military commander,” as a global terrorist.

In 2014 the State Department’s “Rewards for Justice” program announced a reward of $5 million for information bringing Rimi to justice, and then doubled it to $10 million in 2018.

In May 2017, Rimi issued a statement urging supporters in the West to carry out “simple” terrorist attacks, and praised Omar Mateen, the American Muslim who shot dead 49 people at a nightclub in Orlando Florida the previous year. (from a Feb. 7 CNS News report)