World #2 – Iraq: The events that led to US killing of Iranian Gen. Qassem Soleimani 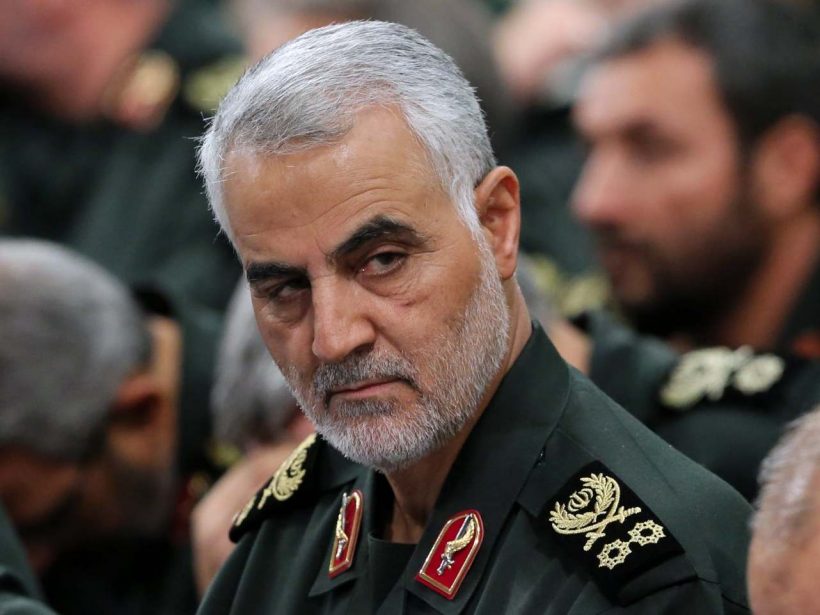 (Compiled from the NY Post and WSJ) – The immediate chain of events that led to the US airstrike that killed top Iranian commander Qassem Soleimani on Jan. 3 in Iraq began in late December, when a missile attack on an Iraqi military base in Kirkuk killed an American contractor.

On December 27, the American contractor was killed and four U.S. troops and several Iraqis were wounded when more than 30 rockets were fired at the military base in Kirkuk, a U.S. defense official said. The US blamed that attack on Kataib Hezbollah, an Iraqi militia closely associated with Iran (and Soleimani).  The U.S. considers KH a terrorist group. [see “Background” below]

Kataib Hezbollah had been firing mortars and rockets at U.S. forces at locations throughout Iraq for months: around Baghdad, around Kirkuk in the north, and also down in the southwest around al-Asad Air Base.

In recent weeks, the rockets have sometimes been fired using timers or remote ignition systems so the culprits can get away. The attackers have begun to use larger, 240 mm rockets that are believed to have been manufactured in Iran, according to one U.S. military official who is being briefed by the Iraqi military.

The US responded to the murder of our contractor with airstrikes in Iraq and Syria that killed 25 militants [terrorists].  This retaliation came two weeks after Secretary of State Mike Pompeo issued a statement warning that any rocket attacks carried out by Iran or its proxies in Iraq that harm Americans “will be answered by a decisive U.S. response.”

In response to the U.S.’s retailatory attack, on Dec. 30-31, pro-Iranian militia members and others stormed the US Embassy compound in Baghdad, which is well inside the Green Zone, setting fires and smashing what they could while chaning “Death to America.”  ABC News reports, “Eyewitnesses said Iraqi security forces let them enter the otherwise heavily fortified Green Zone, where the central government and many foreign embassies are housed.” 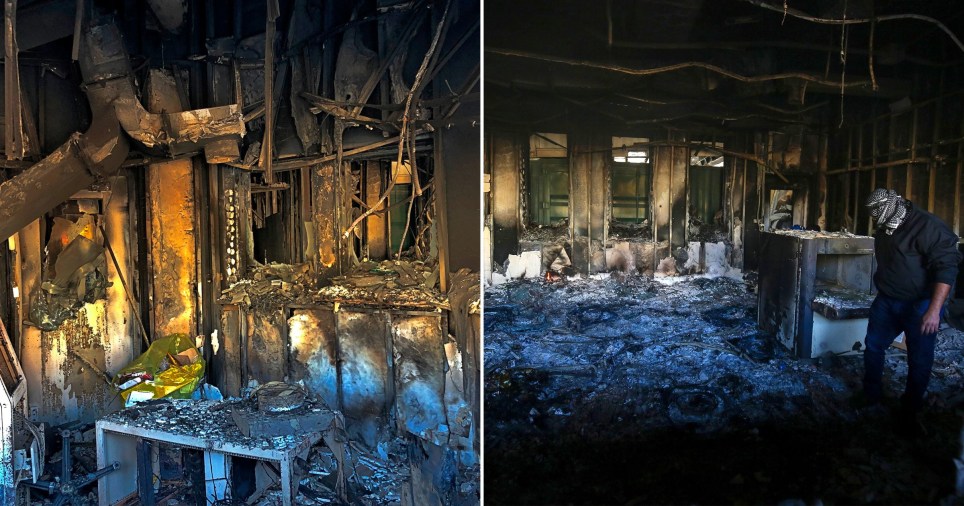 The scorched remains of the security entrance to the US embassy in Iraq after the Dec. 30-31, 2019 attack (Picture: Getty/AP)

[The New York Times reported that Soleimani was at the attack on the U.S. embassy: “Scrawled on a wall of the embassy was graffiti using a nickname for Qassem Suleimani, the leader of the elite Quds Force of Iran’s Islamic Revolutionary Guard Corps. ‘He passed through here,’ the message said.” In the same report, the Times noted, “Iran’s ability to deploy militias to attack the American Embassy, with Iraqi support, made clear how much power it wields in Iraq”].

The US has closely followed Soleimani’s movements over the last few months, but a US official told The Washington Post that discussion of the strike on Soleimani began after the contractor’s death.

On Wednesday, Secretary of State Mike Pompeo suddenly canceled a planned trip to Eastern Europe, citing the need to stay in Washington “to continue monitoring the ongoing situation in Iraq and ensure the safety and security of Americans in the Middle East.”

Pompeo stayed in Washington to advise President Donald Trump on the volatile situation, a senior US official familiar told the newspaper on condition of anonymity.

Secretary of Defense Mark Esper then told reporters at the Pentagon on Thursday that the US may conduct pre-emptive strikes against Iranian-backed militias.

On Friday, Esper said in a statement:

“Gen. Soleimani was actively developing plans to attack American diplomats and service members in Iraq and throughout the region. This strike was aimed at deterring future Iranian attack plans.”

The Pentagon has not gone into specifics about Friday’s strike  on Soleimani using an MQ-9 Reaper drone, though it has made clear President Trump gave the order to carry it out.

Missiles fired by the drone struck a two-vehicle convoy on a road leading to the Baghdad International Airport, according to reports.

Soleimani — who commanded the elite Quds Force, [the terrorist arm] of Iran’s Islamic Revolutionary Guard Corps — was obliterated in the attack, as was Abu Mahdi al-Muhandis, the deputy chief of the Iraqi, largely pro-Iran Kataib Hezbollah. [Soleimani was responsible for the deaths of 600 Americans.] 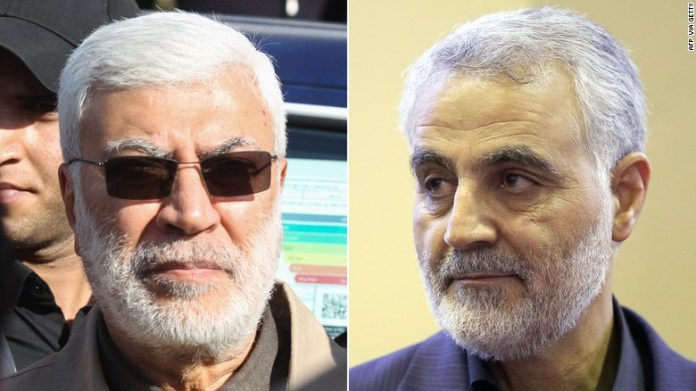 Hamid Mousavi, a political science professor at the University of Tehran, said the assassination stunned many Iranians who revered the military leader.  [It is believed to be equally applauded by the many Iranians who have no love for the Ayatollah and his Revolutionary Guard al Quds Force, having been the victims of these ruthless authoritarian overlords.]

Iran’s Supreme Leader Ayatollah Ali Khamenei promised a “harsh retaliation” for the US, while President Hassan Rouhani described the strike as a “heinous crime” for which the Islamic Republic will seek revenge.

Among those who backed Trump’s decision to order the strike was his former national security adviser John Bolton.

“Congratulations to all involved in eliminating Qassem Soleimani. Long in the making, this was a decisive blow against Iran’s malign Quds Force activities worldwide,” Bolton said in a tweet.  “Hope this is the first step to regime change in Tehran,” he added.

Compiled from reports by Yaron Steinbuch at NY Post on Jan. 3 and by Michael R. Gordon at The Wall Street Journal on Dec. 28. Reprinted here for educational purposes only. May not be reproduced on other websites without permission.

1. For IRAQ, give the following information:

2. For IRAQ:
a) Who was Qassem Soleimani?
b) Where/how was he killed?
c) List the events in order that led to the U.S. drone strike on Soleimani.
d) Who was also killed in the U.S. drone strike alongside Soleimani?
e) What is Kataib Hezbollah? Be specific.
f) What aggressive actions had Kataib Hezbollah militants been engaged in for several months prior to Soleimani’s death?
g) What warning had Secretary of State Mike Pompeo issued two weeks before Soleimani’s death?
h) The Iranian government is enraged that the U.S. followed through on our warning and retaliated after an American was murdered at their direction. Many U.S. news reports warn of dire consequences for the U.S. because Iran is threatening revenge for the killing of the general. The Iranian government has been engaged in a proxy war against the U.S. since the 1979 Islamic Revolution.

James Jay Carafano, a retired Army lieutenant colonel who is vice president for national security and foreign policy at The Heritage Foundation said the following in a statement following Soleimani’s death:

“The reported deaths of Iranian General Qassem Suleimani and the Iraqi commander of the militia that killed an American last week was a bold and decisive military action made possible by excellent intelligence and the courage of America’s service members. The Islamic Revolutionary Guard Corps, led by Suleimani, was responsible for the deaths of more than 600 Americans in Iraq between 2003-2011, and countless more injured.”

“He was a chief architect behind Iran’s continuing reign of terror in the region,” Carafano said of Suleimani, adding: “This strike against one of the world’s most odious terrorists is no different than the mission which took out Osama bin Laden—it is, in fact, even more justifiable since he was in a foreign country directing terrorist attacks against Americans. His death is a huge loss for Iran’s regime and its Iraqi proxies, and a major operational and psychological victory for the United States.”

Ask a parent: what do you think? Did President Trump make the right or wrong decision in taking out Soleimani? Please explain your answer. 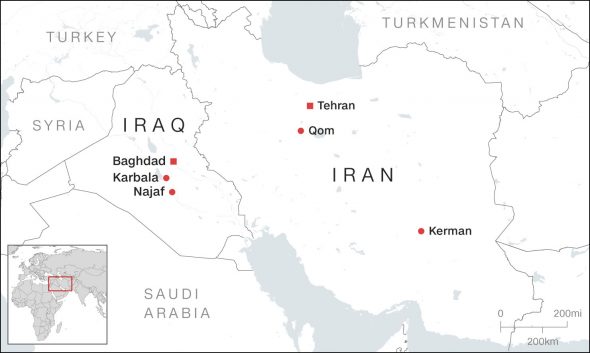