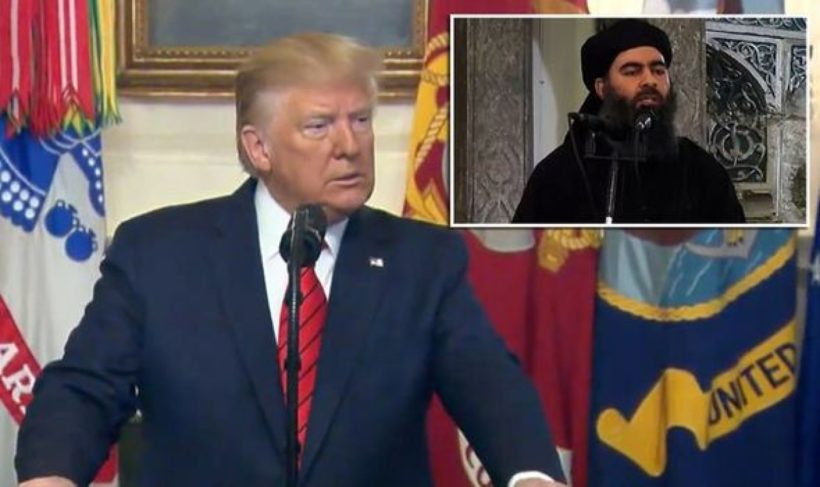 The following is the text of President Trump’s Sunday morning statement on the death of terrorist Abu Bakr Al-Baghdadi:

“Last night, the United States brought the world’s number one terrorist leader to justice. Abu Bakr al-Baghdadi is dead.  He was the founder and leader of ISIS, the most ruthless and violent terror organization in the World.

The United States has been searching for Baghdadi for many years.  Capturing or killing Baghdadi has been the top national security priority of my Administration.  U.S. Special Operations forces executed a dangerous and daring nighttime raid into Northwestern Syria to accomplish this mission.

No U.S. personnel were lost in the operation, while a large number of Baghdadi’s fighters and companions were killed with him.  He died after running into a dead-end tunnel, whimpering and crying and screaming.

The compound had been cleared by this time, with people either surrendering or being shot and killed.  Eleven young children were moved out of the house un-injured.  The only ones remaining were Baghdadi in the tunnel, who had dragged three children with him to certain death.  He reached the end of the tunnel, as our dogs chased him down. He ignited his vest, killing himself and the three children.  His body was mutilated by the blast, but test results gave certain and positive identification.

The thug who tried so hard to intimidate others spent his last moments in utter fear, panic and dread – terrified of the American Forces bearing down.

We were in the compound for approximately 2 hours, and after the mission was accomplished we took highly sensitive material and information from the raid.

Baghdadi’s demise demonstrates America’s relentless pursuit of terrorist leaders, and our commitment to the enduring and total defeat of ISIS!  The reach of America is long.

As you know, last month we announced that we recently killed Hamza Bin Laden, the very violent son of Osama Bin Laden, who was saying very bad things. He was the heir apparent to Al Qaeda. Terrorists who oppress and murder innocent people should never sleep soundly, knowing that we will completely destroy them. These savage monsters will not escape their fate – and they will not escape the final judgement of God.

Baghdadi has been on the run for many years, long before I took office. At my direction, as Commander-in-Chief, the United States obliterated his ‘caliphate’ in March of this year.  Today’s events are another reminder that we will continue to pursue the remaining ISIS terrorists to their brutal end.

Baghdadi and the losers who worked with him – in some cases people who had no idea what they were getting into and how dangerous and unglamorous it was – killed many people.  Their murder of innocent Americans Jim Foley, Steven Sotloff, Peter Kassig, and Kayla Mueller were especially heinous.  The shocking publicized murder of a Jordanian pilot who was burned alive in a cage for all to see, and the execution of Christians in Libya and Egypt, as well as the genocidal mass murder of Yazidis, rank ISIS among the most depraved organizations in history. 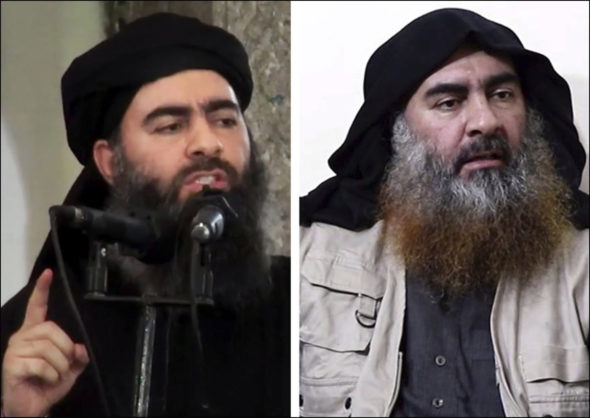 Terrorist and Islamic State leader Abu Bakr al-Baghdadi in Mosul, Iraq, in July 2014 (left) and in a video released in April 2019 (right).  Under al-Baghdadi’s direction, ISIS murdered thousands of civilians around the world in horrific ways such as beheading or burning them alive. (Photo:  AP)

The forced religious conversions, the orange suits prior to many beheadings, all of which were openly displayed for the world – this was all Abu Bakr al-Baghdadi’s work.  He was vicious and violent, and he died in a vicious and violent way, as a coward, running and crying.

This raid was impeccable, and could only have taken place with the acknowledgement and help of certain other nations and people.

I want to thank the nations of Russia, Turkey, Syria and Iraq, and I also want to thank the Syrian Kurds for certain support they were able to give us. Thank you as well to the great intelligence professionals who helped make this very successful journey possible.

I want to thank the soldiers, sailors, airmen, and marines involved in last night’s operation.  You are the very best there is anywhere in the world.  I want to thank General Mark Milley and our Joint Chiefs of Staff, and I also want to thank our professionals who work in other agencies of the United States government and were critical to the mission’s success.

Last night was a great night for the United States and for the World. A brutal killer, one who has caused so much hardship and death, was violently eliminated – he will never again harm another innocent man, woman or child.  He died like a dog.  He died like a coward.  The world is now a much safer place. 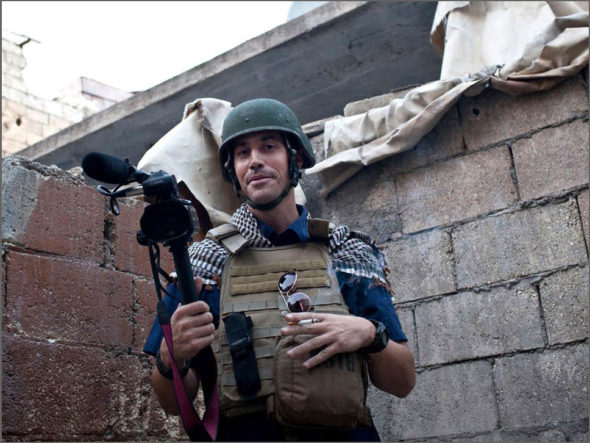 James Foley, known as Jim to his friends and colleagues, was captured and beheaded by ISIS in 2014 while reporting from Syria. 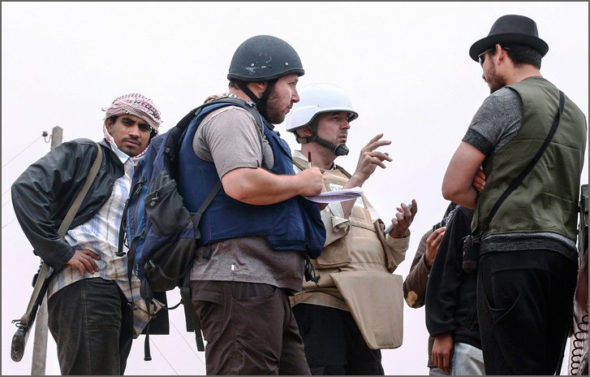 Steven Sotloff was an American-Israeli journalist. In August 2013, he was kidnapped in Aleppo, Syria, and held captive by ISIS terrorists. On September 2, 2014, ISIS released a beheading video, showing one of these vicious evil terrorists beheading Sotloff. 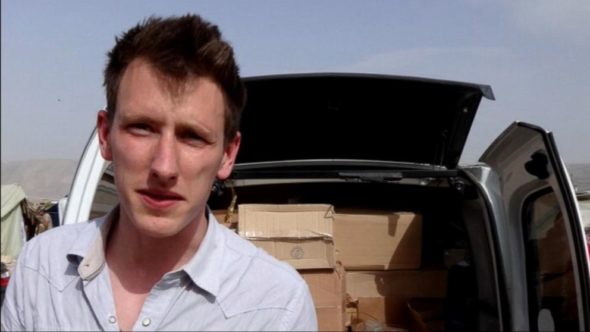 Peter Edward Kassig was an American aid worker who was beheaded by evil ISIS terrorists, led by Abu Bakr al Baghdadi. He was born and raised in Indianapolis, Indiana, USA. On October 1, 2013, Pete was kidnapped by ISIS in eastern Syria. On November 16, 2014, ISIS posted a video showing “Jihadi John” standing over a severed human head. The beheading itself was not shown in the video. The Obama White House later confirmed the person killed was Kassig. 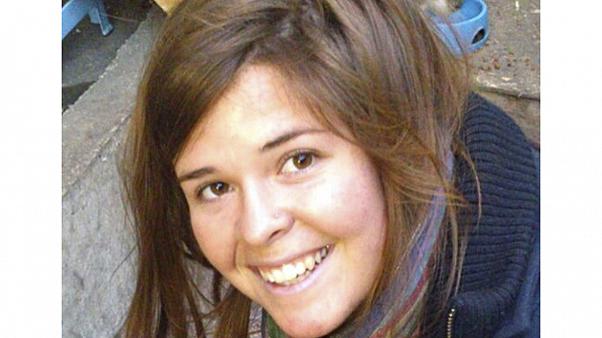 Kayla Jean Mueller was an American human rights activist and humanitarian aid worker from Prescott, Arizona. She was taken captive in August 2013 in Aleppo, Syria by ISIS terrorists, after leaving a Doctors Without Borders hospital. In 2015, she was killed in uncertain circumstances, after being [assaulted] several times by Abu Bakr al-Baghdadi.

2. Who was Steven Sotloff? How did he die?

3. Who was Peter Kassig? How did he die?

4. Who was Kayla Mueller? How did she die?

5. Who was Abu Bakr al-Baghdadi? How did he die?

7. Watch the interview with Republican Senator Steve Daines under “Resources” below (under the Trump video). What do you think of Sen. Daines’ comments on al-Baghdadi’s death?

Who was al-Baghdadi? Watch an Oct. 29 ABC News report: