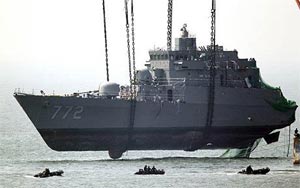 (by Peter Foster in Beijing and Julian Ryall in Tokyo, Telegraph.co.uk) – Tensions have escalated sharply on the Korean Peninsula, where the sinking of a South Korean warship [by the North Korean military] has created a “highly precarious” situation, increasing the risk of a flare-up in the 60-year old conflict, Hillary Clinton, the US secretary of state, warned on Monday.  [Photo at right:  the wreckage of the South Korean naval ship Cheonan is salvaged by a giant offshore crane.]

Her remarks came hours after South Korea announced it was cutting off all trade with the North in retaliation for the deliberate sinking of the [South Korean naval ship] Cheonan in March and vowed “immediate” retaliation if North Korean attempted further provocations.

“We are working hard to avoid an escalation of belligerence and provocation,” Mrs. Clinton said while on a two-day visit to China. “This is a highly precarious situation that the North Koreans have caused in the region.”

In Washington, President Barack Obama threw his full support behind Seoul’s decision and ordered his military commanders to work closely with their South Korean counterparts to “ensure readiness and deter aggression”.

In Beijing, Mrs Clinton engaged in “very intensive consultations” with the Chinese government in a bid to win international support for punitive measures against Pyongyang.

As tensions in the region rose, the US was reported to be forward-deploying a unit of its state-of-the-art F-22 Raptor ground-attack aircraft to Japan before the end of the month, which could be over North Korea within minutes in the event of conflict.

It is also understood that Japan was persuaded to change its mind over the closure of a controversial U.S. air base in Okinawa in part because of Washington’s arguments that the base was essential for deploying US marines to North Korea’s nuclear facilities in the event of the regime’s collapse.

Less than a week after an international inquiry found North Korea responsible for torpedoing the [South Korean warship] with loss of 46 lives, South Korea’s president Lee Myung-bak, announced a package of reprisals in a sombre televised address from the country’s war memorial.

“From now on, (South) Korea will not tolerate any provocative act by the North and will maintain the principle of proactive deterrence,” Mr Lee said in a nationally televised speech delivered from the country’s war memorial.

“If our territorial waters, airspace or territory are violated, we will immediately exercise our right of self-defense.”

Mr Lee, who last week said the sinking was a breach of the 1953 armistice that ended the Korean War, confirmed that Seoul will now refer the matter to the United Nations.

North Korea’s near-bankrupt economy is already reeling from the impact of UN sanctions imposed last year after the illegal testing of a ballistic missile and a second nuclear device, with defectors reporting rising food shortages and growing discontent among the population.

However, Mr Lee said the South was no longer prepared to turn the other cheek in the face of North Korean provocations, as it had in the past after a 1983 bombing in Myanmar aimed at Seoul’s then-president and the downing of a South Korean airliner in 1987, which killed 115 people.

“Now things are different. North Korea will pay a price corresponding to its provocative acts,” said President Lee. He added: “North Korea’s goal is to instigate division and conflict. It is now time for the North Korean regime to change.”

The South’s capital and stock markets dipped slightly on the news, with the won [Korean currency] falling more than two per cent to an eight-month low in early trading, though later recovered a little, as traders appeared to signal that the situation was not yet sufficiently grave to trigger capital flight.

1.  Define the following words as used in the article:

2.  Name the capitals and the leaders of North Korea and South Korea.

3.  What action is South Korea taking against North Korea because of North Korea’s deliberate torpedoing of a South Korean naval ship?

4.  What is Secretary of State Hillary Clinton attempting to do in Beijing?

5.  What military preparations is the U.S. military making?

6.  What warning did President Lee give about North Korean aggression?

7.  Watch the video under “Resources” below.  What do you think of Forbes’ Gordon Chang’s comments about North Korea?

North Korea on Sunday threatened to “crush” South Korea and said the report was an “enormous fabrication” designed to justify an invasion of the North in collaboration with the U.S. (from an AP article at the Washington Times, 5.24.10)

ON KOREA: (from the CIA World FactBook)

Read more about North Korea and South Korea at CIA World FactBook. (NOTE: Both countries are listed under Korea.)

For a clear explanation of the history of North Korea’s nuclear program, read John Podhoretz’s commentary at NYPost.com.

Watch a news report on the North/South Korean conflict below: