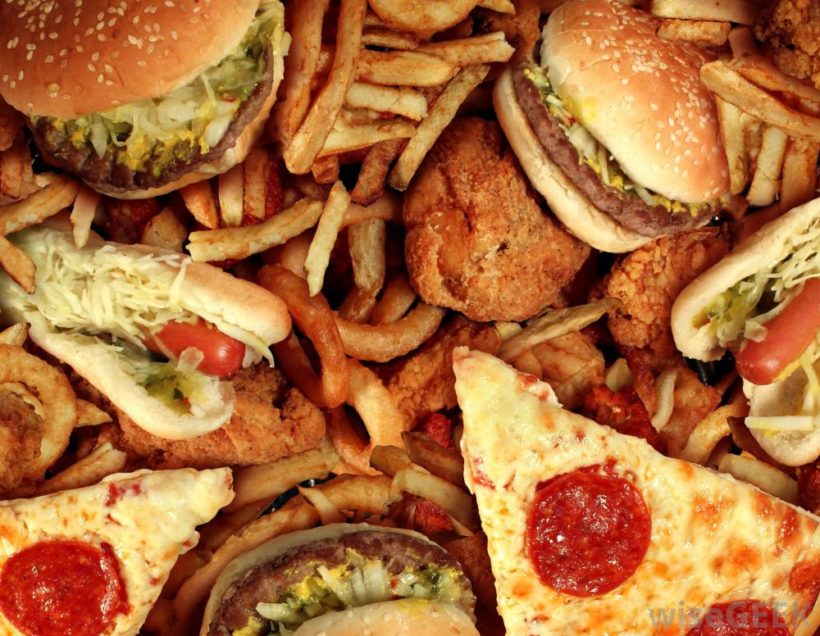 (by Elizabeth Bernstein, The Wall Street Journal) – You’re feeling depressed. What have you been eating? Psychiatrists and therapists don’t often ask this question. But a growing body of research over the past decade shows that a healthy diet—high in fruits, vegetables, whole grains, fish and unprocessed lean red meat—can prevent depression.

And an unhealthy diet—high in processed and refined foods—increases the risk for the disease in everyone, including children and teens.

Now recent studies show that a healthy diet may not only prevent depression, but could effectively treat it once it’s started.

Researchers, led by epidemiologist Felice Jacka of Australia’s Deakin University, looked at whether improving the diets of people with major depression would help improve their mood. They chose 67 people with depression for the study, some of whom were already being treated with antidepressants, some with psychotherapy, and some with both. Half of these people were given nutritional counseling from a dietitian, who helped them eat healthier. Half were given one-on-one social support—they were paired with someone to chat or play cards with—which is known to help people with depression.

A second, larger study drew similar conclusions and showed that the boost in mood lasted six months. It was led by researchers at the University of South Australia and published in December 2017 in Nutritional Neuroscience.

And later this month in Los Angeles at the American Academy of Neurology’s annual meeting, researchers from Rush University Medical Center in Chicago will present results from their research that shows that elderly adults who eat vegetables, fruits and whole grains are less likely to develop depression over time.

The findings are spurring the rise of a new field: nutritional psychiatry. Dr. Jacka helped to found the International Society for Nutritional Psychiatry Research in 2013. It held its first conference last summer. She’s also launched Deakin University’s Food & Mood Centre, which is dedicated to researching and developing nutrition-based strategies for brain disorders.

The annual American Psychiatric Association (APA) conference has started including presentations on nutrition and psychiatry, including one last year by chef David Bouley on foods that support the peripheral nervous system.

And some medical schools, including Columbia University’s Vagelos College of Physicians and Surgeons, are starting to teach psychiatry residents about the importance of diet on mental health.

Depression has many causes—it may be genetic, triggered by a specific event or situation, such as loneliness, or brought on by lifestyle choices. But it’s really about an unhealthy brain, and too often people forget this.

A bad diet makes depression worse, failing to provide the brain with the variety of nutrients it needs, Dr. Ramsey says.

And processed or deep-fried foods often contain trans fats that promote inflammation, believed to be a cause of depression. To give people evidenced-based information, Dr. Ramsey created an e-course called “Eat to Beat Depression.”

A bad diet also affects our microbiome—the trillions of micro-organisms that live in our gut. They make molecules that can alter the production of serotonin, a neurotransmitter found in the brain, says Lisa Mosconi, a neuroscientist, nutritionist and associate director of the Alzheimer’s Prevention Clinic at Weill Cornell Medical College in New York. The good and bad bacteria in our gut have complex ways to communicate with our brain and change our mood, she says. We need to maximize the good bacteria and minimize the bad.

So what should we eat? The research points to a Mediterranean-style diet made up primarily of fruits and vegetables, extra-virgin olive oil, yogurt and cheese, legumes, nuts, seafood, whole grains and small portions of red meat. The complexity of this diet will provide the nutrition our brain needs, regulate our inflammatory response and support the good bacteria in our gut, says Dr. Mosconi, author of “Brain Food: The Surprising Science of Eating for Cognitive Power.”

Can a good diet replace medicine or therapy? Not for everyone. But people at risk for depression should pay attention to the food they eat. “It really doesn’t matter if you need [anti-depressant medication] or not. We know that your brain needs nutrients,” Dr. Ramsey says.

A healthy diet may work even when other treatments fail. And at the very least, it can serve as a supplemental treatment—one with no bad side effects, unlike antidepressants—that also has a giant upside. It can prevent other health problems, such as heart disease, obesity and diabetes. …

Reprinted here for educational purposes only. May not be reproduced on other websites without permission from The Wall Street Journal. (Originally published on April 2, 2018.)

1. What do recent studies show about diet and depression?

2. a) What is epidemiology?
b) Describe the study conducted by epidemiologist Felice Jakca of Australia’s Deakin University.
c) What did the study show?

3. What was the conclusion of a second, larger study?

4. What effect does a diet filled with vegetables, fruits and whole grains have on senior citizens, according to research conducted at Rush University Medical Center in Chicago?

5. What are the APA and some medical schools doing to acknowledge the potential benefits from the practice of nutritional psychiatry?

6. a) What foods should people eat, according to Dr. Lisa Mosconi?
b) Re-read paragraphs 12-14. Would this information cause you to re-think what you eat? Why or why not?

The following is also from the Wall Street Journal article above. Keep in mind that this is only one person’s experience with switching to a healthy diet:

Loretta Go, a 60-year-old mortgage consultant in Ballwin, Mo., suffered from depression for decades. She tried multiple antidepressants and cognitive behavioral therapy, but found little relief from symptoms including insomnia, crying jags and feelings of hopelessness. About five years ago, after her doctor wanted to prescribe yet another antidepressant, she refused the medicine and decided to look for alternative treatments.

Ms. Go began researching depression and learned about the importance of diet. … So she ditched processed and fried foods, sugar and diet sodas. In their place, she started to eat primarily vegetables and fruits, eggs, turkey and a lot of tofu. She bought a Vitamix blender and started making a smoothie with greens for breakfast each morning.

Within a few months, Ms. Go says she noticed a difference in her mood. She stopped crying all the time. Her insomnia went away and she had more energy. She also began enjoying activities again that she had given up when she was depressed, such as browsing in bookstores and volunteering at the animal shelter.

Ms. Go’s depression has never come back. “This works so well,” she says. “How come nobody else talks about this?”

From the Wall Street Journal article above:

A Diet to Help Stay Happy

What should you eat to beat depression?

Experts say it’s important to eat a balanced, Mediterranean-style diet. But some nutrients are particularly helpful. Here are some examples, and which foods supply them.

Vitamin B6: An ingredient needed to produce serotonin, the main neurotransmitter that regulates mood and sleep. Too little serotonin is associated with depression. We need Vitamin B6 every day from our diet.

DHA: The main omega-3 fat in the brain. It promotes production of brain-derived neurotrophic factor (BDNF), a hormone that protects neurons and promotes the birth of new brain cells.

Prebiotics: Foods that the good microbes in our gut need to stay alive.

Probiotics: Live bacteria and yeasts that replenish the good bacteria in our microbiome.

Sources: Yogurt. Sauerkraut. Kefir. Kimchi or other fermented vegetables, such as turnips, cucumbers or carrots.