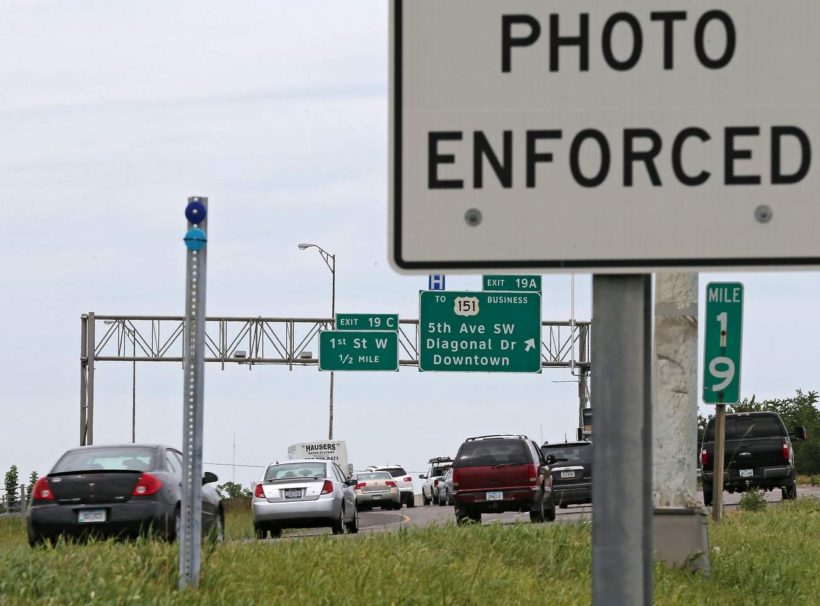 (by Scott Calvert, The Wall Street Journal) BALTIMORE—When a Honda sped along the Beltway at 67 mph, 12 mph over the limit, in a construction zone near midnight, a state-sponsored camera caught the moment, including its license plate number.

The result was a $40 citation (ticket), from the Maryland Department of Transportation, to the Honda owner. It was one of more than 2.3 million tickets the state has issued since 2010, when officials began using automated cameras to help identify drivers speeding through highway work areas.

Nationally, 139 communities have speed-camera programs, up from 100 in 2010, the Insurance Institute for Highway Safety says. But only three states, Maryland, Illinois and Oregon, use the automated enforcement to nab speeders who zip past highway-construction activity.

Maryland is the most aggressive in its use of work-zone speed cameras, based on ticket volume, and state officials say the cameras are effective. The proportion of vehicles speeding past the cameras dropped from 1% in 2013 to 0.5% in 2015, and the 343,482 tickets issued last fiscal year marked a 39% decrease from 2011.

Yet in recent years the state has had an uptick in both work-zone crashes and deaths, records show.

Now, Pennsylvania lawmakers are considering a measure to create a highway work-zone speed enforcement program based on Maryland’s. The measure has drawn bipartisan support in the state Senate and the backing of Democratic Gov. Tom Wolf.

Its proposal comes amid a long-running debate in statehouses around the U.S. over the pros and cons of speed cameras, which photograph the license plate of a speeding car clocked by radar or other technology. Speed-camera supporters point to the safety benefits reflected in some studies and say high-visibility signs warn drivers to slow down. Opponents often portray them as money grabs.

“The last thing you want any of these programs to be is a gotcha program,” said Jonathan Adkins, executive director of the Governors Highway Safety Association, which backs expanded use of the cameras. He said perceptions that the primary aim is to raise revenue by surprising drivers help explain why lawmakers in more than a dozen states have banned speed cameras outright or with narrow exceptions.

John Bowman, vice president of the anti-speed camera National Motorists Association, said car owners usually don’t get a citation (speeding ticket) until weeks after the incident, making a legal defense difficult. He also cited reliability concerns, including revelations that Baltimore’s now-dormant speed camera program fined some motorists who weren’t speeding and, in one case, issued a speeding ticket for a car stopped at a red light.

Although Maryland work-zone crashes fell after its camera program began, “there’s nothing to say those rates wouldn’t have been going down anyway,” given gains in U.S. highway safety nationwide, he said.

In Portland, Ore., where the state’s work-zone enforcement largely occurs, police purposely limit its use, said Sgt. David Abrahamson, who oversees the photo-enforcement unit. “Why do we want to go out and deploy in a work zone just because we can, if it’s going to be perceived that that’s a revenue-maker?” he said.

Oregon law requires the department to poll the public every two years to gauge residents’ support of the program, he said, helping ensure “we’re not policing for profit.” Initial results of this year’s survey show more than 60% of respondents back the use of speed cameras, Sgt. Abrahamson said.

Illinois has sent out just under 4,000 automated work-zone tickets over the past four years, none last year. The Department of Transportation has reduced emphasis on speed cameras and focused more on marked police vehicles, said spokeswoman Gianna Urgo.

“Highly visible police presence in work zones reminds the public to slow down and move over for workers,” she said in an email. “With this approach, troopers can also respond more quickly to emergency situations and focus their efforts on infractions other than just speeding.”

The Pennsylvania fines would be $100 and, as in Maryland, no points would go on a violator’s driving record. Unlike in Maryland, enforcement could occur only when workers were next to an active travel lane.

Support for the bill came from Mike Hawbaker, an owner of Northeast Prestressed Products, LLC, which makes concrete pre-stressed bridge beams. Mr. Hawbaker said speed cameras will make conditions safer for his workers on job sites by giving drivers an incentive to slow down. “This is probably the first thing that can start to affect this behavior,” he said.

Overall, work-zone crashes trended lower in Maryland after the speed camera program began, averaging 1,638 a year from 2010 to 2014, compared with 2,201 from 2005 to 2009, state figures show. Work-zone deaths fell by 38% to an average of 7.2 in that span, compared with the prior five years, according to federal data collected by the National Work Zone Safety Information Clearinghouse. Nationally, work-zone deaths declined by 29%. Figures count workers, drivers and passengers.

Yet highway crash and fatality rates across the U.S. have fallen over time without camera enforcement, a trend safety experts attribute partly to better vehicle design. Federal figures for 2015 aren’t available.

In 2013 and 2014, Maryland had more work-zone crashes and fatalities than in prior years, even though the speed cameras were then in place. State officials blame the upsurge on increased highway traffic…, as well as a new wave of highway construction projects. Last year’s figures aren’t available.

Dave Coyne, Maryland’s deputy state highway administrator, said the uptick doesn’t weaken the logic for using speed cameras. “How many additional crashes in the work zones did we avoid or eliminate by having the program?”

Mr. Coyne said speed cameras are “just one tool” and that officials are also looking into other methods, such as intrusion alarms, which sound a warning to construction workers when a car leaves the road.

Of the $82 million Maryland has collected in work-zone speed-camera fines since 2010, roughly one-third has gone to its vendor, a unit of Xerox Corp. The net revenue, about $45 million so far, goes toward state police trooper salaries, patrol vehicles and equipment.

Published at WSJ .com on April 18. Copyright 2016 Dow Jones & Company, Inc. All Rights Reserved. Reprinted here for educational purposes only. May not be reproduced on other websites without permission from The Wall Street Journal. Visit the website at wsj .com.

1. How do speed cameras work?

2. List the states that currently use speed cameras to catch people speeding in highway construction zones.

3. a) How many tickets has the state of Maryland issued since starting to use speed cameras in highway work zones?
b) The percentage of vehicles speeding in work zones has had decreased since 2011. What number related to work zones has increased in the state in recent years?

4. How do supporters and opponents differ in their view of the use of speed cameras by states? Be specific.

5. Why do the Portland, Oregon police limit the use of speed cameras?

6. How/why has the Illinois Department of Transportation changed the focus of their efforts to get motorists to slow down in work zones?

7. Re-read para. 17-20. Do you think that stationing police cars in work zones or posting flashing signs with a drivers’ speed would have the same effect as speed cameras? Explain your answer.