(by Sarah Childress, WSJ.com) DJIBOUTI, Djibouti – Somalia’s new president, Sheikh Sharif Sheikh Ahmed, gave an optimistic but general forecast for peace in his nation, saying it will take about a year to reconcile political factions and restore stability to the war-torn country.

In his first interview with a Western publication since his election, Mr. Ahmed rejected extremism and said he would need international help to rebuild Somalia after nearly two decades of clan-based violence, political upheaval and lawlessness. The 44-year-old teacher-turned-politician was elected by parliament last month, and this week plans to select his cabinet.

Mr. Ahmed’s biggest challenge will be to confront the militant group Al Shabab. The group was labeled a terrorist organization by the U.S. last year and is now the most powerful force in Somalia. Al Shabab was part of Mr. Ahmed’s previous government, which was in power for six months in 2006.

Mr. Ahmed said Monday that neither he nor his government had communicated directly with Al Shabab. Instead, he said he had made a public appeal to all groups to lay down their arms and participate in rebuilding the country.

“If they agree to a dialogue, they are in, whatever their past positions were,” he said, speaking through a translator during the interview. “If they are against dialogue, there is no way we can deal with them, except to be harsh.” 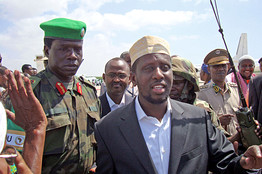 Al Shabab gained popularity by opposing the Ethiopian invasion of Somalia, and used the support to push a hard-line strain of shariah, or Islamic law, that most Somalis, including Mr. Ahmed, have denounced. The group occupies much of south-central Somalia, including the port city of Kismayo as well as Baidoa, the seat of the Somali parliament.

Security is so tenuous that the government of Somalia has been living in neighboring Djibouti for the past month. Mr. Ahmed, who returned to his country briefly this month, has been staying in one of the Djiboutian president’s guest houses. A stream of visitors leaves him little time for meals; Mr. Ahmed takes time out only to answer the Muslim calls to prayer that echo across the city.

Although appearing weary from a day of meetings, the soft-spoken president seemed focused and determined while discussing the problems his country faces.

So far, Mr. Ahmed said, no members of Al Shabab have expressed interest in talks. He has won support, at least for now, from clan leaders weary of fighting, by declaring a fresh start. His choice of Omar Abdirashid Ali Sharmarke, a respected leader from a prominent rival clan as prime minister, could also go a long way toward healing rifts.

“Choosing him from another clan will get us to the next stage,” Mr. Ahmed said — one that moves beyond clan-based politics. “We’ve chosen him and other officials in the government…capable people who can lead the country out of the mess we’re in right now. Everyone must feel responsible for restoring peace in Somalia.”

A unified front against Al Shabab, as well as the extremists’ dwindling public support, could help the government fend off the group while building a stronger security force. In the meantime, Mr. Ahmed will rely heavily on the presence of African Union peacekeeping forces.

Mr. Ahmed said he plans to return within weeks. “Somalia has been a devastated country for so long and now we’re building it from scratch,” he said. Among his priorities: training and paying security forces, helping the estimated 1.3 million internally displaced Somalis return to their homes and restoring basic services.

“The international community is exploring what we can do for him,” one Western diplomat said. “With that said, we’re not going to suddenly open a spigot that wasn’t previously opened.”

Mr. Ahmed entered politics years ago when one of his students was kidnapped. In 2006, he became the chairman of the Union of Islamic Courts, which took power by force and ruled by shariah for six months, until being overthrown by Ethiopian troops. Mr. Ahmed was a moderate voice, but was drowned out by extremist elements.

1. a) Name the countries and ocean that border Somalia.
b) What is the capital of Somalia?

2. How does newly elected President Sheikh Sharif Sheikh Ahmed view the prospect of peace in Somalia?

3. a) Mr. Ahmed’s biggest challenge will be to confront the militant group Al Shabab. The group was labeled a terrorist organization by the U.S. last year and is now the most powerful force in Somalia. Al Shabab was part of Mr. Ahmed’s previous government, which was in power for six months in 2006.
What offer did Mr. Ahmed make to Al Shabab?
b) How will Mr. Ahmed respond if Al Shabab rejects his offer?

4. Why has the government of Somalia been living in the neighboring country of Djibouti for the past month?

5. Why might Mr. Ahmed’s choice for prime minister greatly help to unite the country?

6. What factors might help Mr. Ahmed to fend off Al Shabab while the government is building a stronger security force?

7. Read the “Background” on Somalia below. Mr. Ahmed was considered to be a moderate voice when his party last ruled Somalia in 2006. Do you think he will succeed in bringing stability to Somalia? Explain your answer.

ON SOMALIA: (from the CIA World FactBook and wikipedia.org)

For a map of Africa and Somalia, go to worldatlas.com.

For background information on Somalia, go to the CIA World FactBook.

Read about sharia law (Islamic law – by which governments of many Muslim countries abide) at cfr.org.