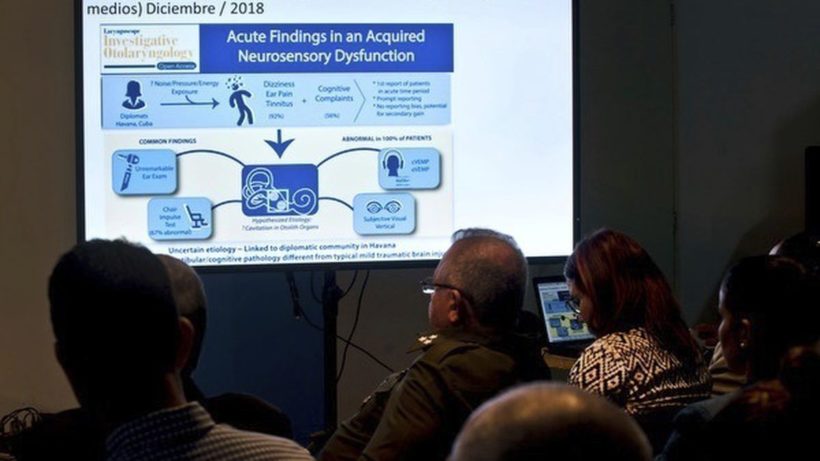 In this March 14, 2019, file photo, Cuban officials make a presentation on a series of mysterious illnesses suffered by U.S. and Canadian diplomats in Havana, claiming that no evidence supports allegations that the symptoms resulted from high-tech attacks, during a news conference in Havana, Cuba. A report by the National Academy of Sciences has found that “directed” microwave radiation is the likely cause of illnesses among American diplomats in Cuba and China. The study was commissioned by the U.S. State Department and released Dec. 5. (AP Photo/Ramon Espinosa)

(by BBC News) — [A new report from the National Academy of Sciences has found “directed” radio frequency energy to be the most plausible explanation for mysterious and debilitating neurological symptoms experienced by dozens of American diplomats and intelligence operatives in Cuba, China, and other countries starting in late 2016.

The State Department-commissioned report…does not come to firm conclusions about the origins and nature of the affliction often referred to as “Havana syndrome,” but its account gives weight to theories that the illnesses are the results of deliberate attacks — which some members of the intelligence community suspect may have been carried out by Russia].

The mystery illness suffered by US diplomats in Cuba was most likely caused by directed microwave radiation, the US government report has found.

The report by the National Academies of Sciences does not attribute blame for the directed energy waves.  But it said research into the effects of pulsed radio frequency energy was carried out by the Soviet Union more than 50 years ago.

The illnesses first affected people at the US embassy in Havana in 2016-17. 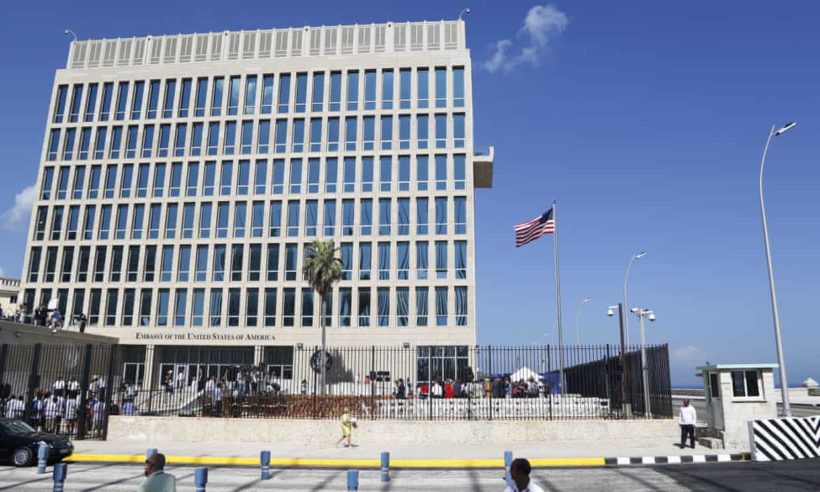 A US flag flies at the American embassy in Havana, Cuba, where staff fell ill with symptoms including nausea and headaches. (Photo: Desmond Boylan/AP)

Staff and some of their relatives complained of symptoms ranging from [nausea, headaches,] dizziness, loss of balance, hearing loss, anxiety and something they described as “cognitive fog.”  It became known as “Havana syndrome.”

The US accused Cuba of carrying out “sonic attacks,” which it strongly denied, and the incident led to increased tension between the two nations.

A 2019 US academic study found “brain abnormalities” in the diplomats who had fallen ill, but Cuba dismissed the report.

Canada also cut its embassy staff in Cuba after at least 14 of its citizens reported similar symptoms.

The latest study was carried out by a team of medical and scientific experts who examined the symptoms of about 40 government employees.  Many have suffered longstanding and debilitating effects, the report said.

“The committee felt that many of the distinctive and acute signs, symptoms and observations reported by (government) employees are consistent with the effects of directed, pulsed radio frequency (RF) energy,” the report reads.

“Studies published in the open literature more than a half-century ago and over the subsequent decades by Western and Soviet sources provide circumstantial support for this possible mechanism.”

It noted there had been “significant research in Russia/USSR into the effects of pulsed, rather than continuous wave [radio frequency] exposures.”  It said that military personnel in “Eurasian communist countries” had been exposed to non-thermal radiation.

Cuba was not the only posting where US diplomats have reported the unusual symptoms.

In 2018, the US removed several officials from China after employees working in the southern city of Guangzhou reported “subtle and vague, but abnormal, sensations of sound and pressure.  One US official was diagnosed with mild brain trauma.

Published at BBC News. Reprinted here for educational purposes only. May not be reproduced on other websites without permission from BBC.

2. What are the symptoms of “Havana Syndrome”?

3. What did a 2019 US academic study of the diplomats concerned find?

4. Why did Canada also cut its embassy staff in Cuba?

5. a) What did the latest study by experts from the National Academy of Sciences conclude?
b) What connection was made to Russia?

6. In addition to Cuba, from what country did the U.S. remove several officials? Why?

CHALLENGE: Read a “Brief Diplomatic History” between Communist Cuba and the U.S.

President Obama first eased trade restrictions with Cuba in January 2016 and then reestablished diplomatic ties, even as the Communist dictatorship denied Cubans their freedom. The attacks on our diplomats began sometime in 2016. Based on the supposition that Cuba allowed or asked Russia to conduct these types of attacks on our diplomats, what do you think U.S. policy should be toward the Cuban government going forward? (Ask a parent his/her opinion if you don’t know.)

And as the New York Times reports, these experts and others in national security have pointed out that Russia, as well as the former Soviet Union, have a history of working with microwave weapons — and of using them against the US:

The [National Academy of Sciences] report does not point to a perpetrator, though it mentions “significant research in Russia/U.S.S.R.” on pulsed radiofrequency technology, as well as the exposure of military personnel in Eurasian communist countries to microwave radiation. The Soviet Union bombarded the American Embassy in Moscow with microwaves in the 1970s and ’80s. In a 2014 document, the National Security Agency discussed a microwave weapon used by a hostile country, which people familiar with the document said was Russia.

NBC News reports that a source said that the CIA used mobile phone location data to determine that some Russian intelligence operatives who were involved in microwave weapons programs were present in cities at the same time that CIA agents began suffering from symptoms of Havana Syndrome. (from a Dec. 6 Vox report)