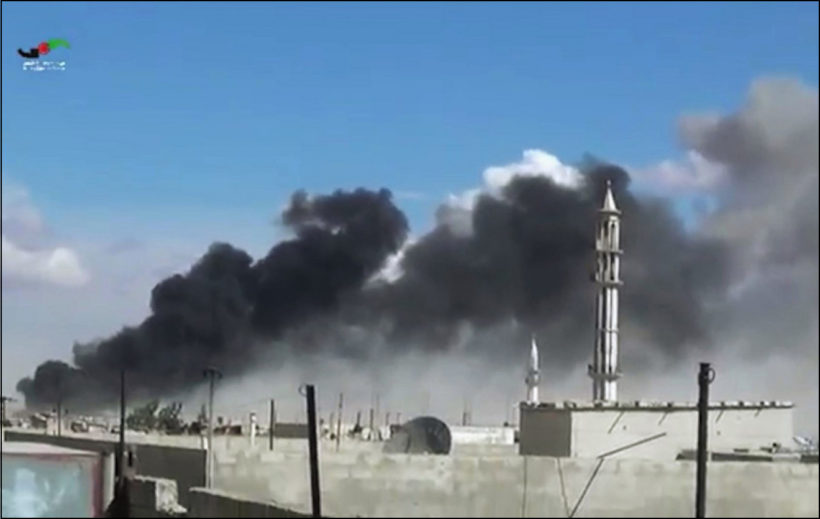 Smoke rises after airstrikes by military jets in Talbiseh of the Homs province, western Syria, Wednesday, Sept. 30, 2015. Russian military jets carried out airstrikes in Syria for the first time on Wednesday, targeting what Moscow said were Islamic State positions. U.S. officials and others cast doubt on that claim, saying the Russians appeared to be attacking opposition groups fighting Syrian government forces. (Homs Media Centre via AP)

One of the airstrikes hit an area primarily held by rebels backed by the CIA and allied spy services, U.S. officials said, catapulting the Syrian crisis to a new level of danger and uncertainty. Moscow’s entry means the world’s most powerful militaries – including the U.S., Britain and France – now are flying uncoordinated combat missions, heightening the risk of conflict in the skies over Syria.

“I have been dealing with them for a long time. And this is not the kind of behavior that we should expect professionally from the Russian military,” Secretary Carter said at a Pentagon news conference.

Secretary of State John Kerry met with Russian Foreign Minister Sergei Lavrov and said he raised U.S. concerns about attacks that target regime opponents other than Islamic State, also known as ISIS or ISIL. In Syria’s multi-sided war, Mr. Assad’s military – aided by Iran and the Lebanese Shiite group Hezbollah – is fighting both Islamic State and opposition rebel groups, some of which are supported by the U.S. and its allies.

Mr. Kerry said the U.S. and Russia need to hold military talks as soon as possible and Mr. Lavrov said he agreed.

The U.S. and its allies were angry at the Russians on many scores: that they are supporting Mr. Assad; that they aren’t coordinating their actions with the existing, U.S.-led anti-Islamic State coalition; that they provided terse notice only an hour before their operations; that they demanded the U.S. coalition stay out of Syrian airspace; and that they struck in areas where anti-Assad rebels – not Islamic State – operate. …

U.S. officials said it was unclear if Moscow directly targeted a location held by the CIA-backed fighters in western Syria because of their association with the U.S.’s covert (secret) program to fund, arm and train the rebels.

Officials said it was also unclear if any U.S.-backed fighters were killed in the strike. A CIA spokesman declined to comment.

Russia said its initial strikes inside Syria on Wednesday were aimed at Islamic State targets. But senior U.S. officials cast doubt on those claims. The U.S. spy agency has been arming and training rebels in Syria since 2013 to fight the Assad regime. Rebels who receive support under a separate arming and training program run by the Pentagon weren’t in areas targeted by Russia in its initial strikes, the officials said.

The combination of unpredictable, unilateral action that flouted Western exhortations posed an unmistakable resemblance to Ukraine, where Mr. Putin moved to annex (take over) the Crimea region and has defied (ignored) international demands to halt its support for pro-Russian separatists in Ukraine. …

Russia is also playing a greater military role in Iraq, which is threatened by Islamic State (ISIS) and aided by the U.S.-led coalition. Iraq agreed this week to share intelligence with Russia, the Syrian regime and Iran to counter Islamic State.

Iraqi Prime Minister Haider al-Abadi said he would welcome Russian airstrikes against Islamic State in Iraq as long as they are coordinated with the U.S.-led coalition.

“If the Russians are prepared to join the international coalition, which is helping Iraq, they’re welcome,” he said in a PBS interview.

French Foreign Minister Laurent Fabius said the first indications he had on the Russian strikes is that they didn’t target areas controlled by Islamic State. At a United Nations summit in New York, British Foreign Secretary Philip Hammond said the targets were still unclear.

“They are the first Russian airstrikes as far as we’re aware, so the selection of targets won’t have been accidental or random,” he said. “If they are clearly ISIL targets far away from any regime activity, that will send one signal,” he said. “If they are targets that look more like defense of regime forces than attack on ISIL forces, that will send a very different signal.”

American officials were taken aback by Russia’s decision to announce the strikes by sending a three-star Russian general to the U.S. embassy in Baghdad on Wednesday. The general gave U.S. officials an hour’s notice before he arrived, delivered the message that Russia was going to start bombing, said American aircraft should get out of Syrian airspace and left, American officials said.

One defense official called it “unprofessional.” Another called it unproductive.

U.S. officials said they didn’t alter their airstrike and surveillance missions over Syria as a result of Russia’s attacks. But the lack of coordination makes it more challenging to avoid potential confrontations.

U.S. defense officials said they are still trying to set up meetings with their Russian counterparts to discuss ways to prevent a direct conflict between the two global military powers. But Wednesday’s attacks cast a shadow over the hopes for the discussions.

“You’ve got to have a willing partner to come to the table and tell you the truth,” said a senior military official.

Russia has built up its military presence in Syria in recent weeks to support Mr. Assad after he suffered a series of battlefield setbacks and acknowledged publicly that he could no longer hold on to all of the country after more than four years of war. During the buildup, Moscow said its intent was to fight Islamic State and [other] opponents of the regime [they said were] terrorists.

U.S. defense officials said that Russia now has 32 planes stationed at an airfield near the Syrian coast. Along with jet fighters, Russia has 16 helicopters, nine tanks, at least two surface-to-air missile defense systems and enough housing for up to 2,000 people, U.S. officials said.

Moscow and Syrian state media claimed Russia’s initial strikes hit areas under Islamic State control. The Syrian state news agency said the targets were in the central provinces of Homs and Hama. However, most of the areas that state media listed as targets aren’t known to be Islamic State-held territory.

–Dana Ballout in Beirut, Gordon Lubold and Laurence Norman in New York and Olga Razumovskaya in Moscow contributed to this article. 1. What action did Russia take in Syria on Wednesday?

2. What danger does this create for the U.S. and our allies?

3. a) What response have U.S. officials made to Russia’s surprise airstrikes? Be specific.
b) What do you think of the Obama administration’s initial response to Russia’s aggression?

4. List the actions taken by Russia that have angered the U.S. and our allies. (see para. 7)

5. a) How is the Iraqi government working with Russia and others to fight ISIS?
b) Why would the U.S. and our allies be opposed to such an alliance?

6. How was the U.S. informed about the Russian airstrikes that took place on Wednesday? (Remember, President Obama met with Russian President Vladimir Putin on Monday at the UN. During the meeting, the two agreed that their armed forces should hold talks to avoid coming into conflict in Syria after a Russian military buildup there over the last several weeks.)

7. How did Russia’s stated reason for its initial military build-up in Syria differ from the action they took on Wednesday?

What do the CIA and FBI do?

The Central Intelligence Agency (CIA) is a civilian foreign intelligence service of the U.S. Government, tasked with gathering, processing and analyzing national security information from around the world, primarily through the use of human intelligence.

As one of the principal members of the U.S. Intelligence Community (IC), CIA reports to the Director of National Intelligence and is primarily focused on providing intelligence for the President and his Cabinet.

Unlike the Federal Bureau of Investigation (FBI), which is a domestic security service, CIA has no law enforcement function and is mainly focused on overseas intelligence gathering, with only limited domestic collection. (fro wikipedia)