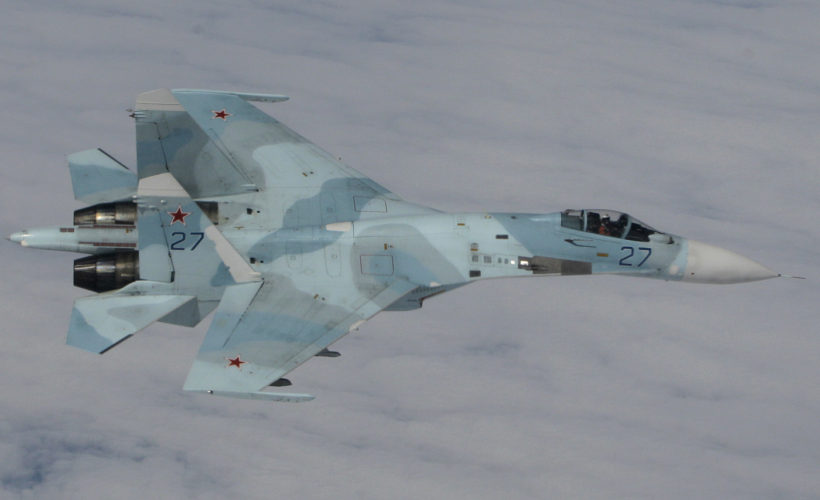 (by Melkorka Licea, NY Post) – A Russian plane performed an “unsafe and unprofessional” barrel roll over a US Air Force jet above the Baltic Sea — the latest in a string of such incidents, the Pentagon announced on Saturday. [The Baltic countries regained their independence in the early 1990s after nearly five decades under Soviet occupation.]

The Russian Su-27 came within 25 feet of a US RC-135 reconnaissance plane on Friday and flew upside down over its cockpit.

The American jet was flying a routine mission in international airspace when the Russian plane intercepted it, according to the Pentagon.

The dangerous act “has the potential to cause serious harm and injury to all aircrews involved,” Pentagon spokesman Bill Urban said in a statement.

The Russian Ministry of Defense claimed its pilot buzzed the Americans because the American jet’s transponder was turned off.

“All flights of Russian planes are conducted in accordance with international regulations on the use of airspace,” Russia said in a statement. “The US Air Force has two solutions: Either not to fly near our borders or to turn the transponder on for identification.”

On April 11, Russian Su-24 jets buzzed the USS Donald Cook destroyer 20 times. On April 12, two Russian Sukhoi Su-24 warplanes flew so close to a US guided-missile destroyer they created wakes in the Baltic Sea during 11 passes, a US official said.

Then, on April 14, a Russian Su-27 pulled a similar stunt in the Baltic, flying just 50 feet off an American plane’s wing tip.

Following that incident, Secretary of State John Kerry cautioned: “We condemn this kind of behavior. It is reckless. It is provocative. It is dangerous.”

The incidents reveal increasing provocation by Russia and rising tensions between Russia and the US over eastern Europe.

The Department of Defense announced in February it was spending $3.4 billion for the European Reassurance Initiative to help deter increasing Russian aggression against NATO allies.

[As reported after the previous incidents, the events were reminiscent of the Cold War, when a series of close calls led to a bilateral agreement aimed at avoiding dangerous interactions at sea that was signed in 1972 by then-Secretary of the Navy John Warner and Soviet Admiral Sergei Gorshkov.

The agreement prohibited “simulated attacks against aircraft or ships, performing aerobatics over ships, or dropping hazardous objects near them.” The accord can be seen here: state.gov/t/isn/4791.htm]

1. Answer the following questions about the latest Russian provocation:
a) Where was the U.S. jet? Be specific.
b) What type of jet is it?
c) What type of mission was it on?
d) How close did the Russian plane come to the US jet?

2. How did Russia respond to questions about its latest provocation?

3. List the other recent incidents when Russia buzzed U.S. ships/planes.

Read a commentary about the European Reassurance Initiative