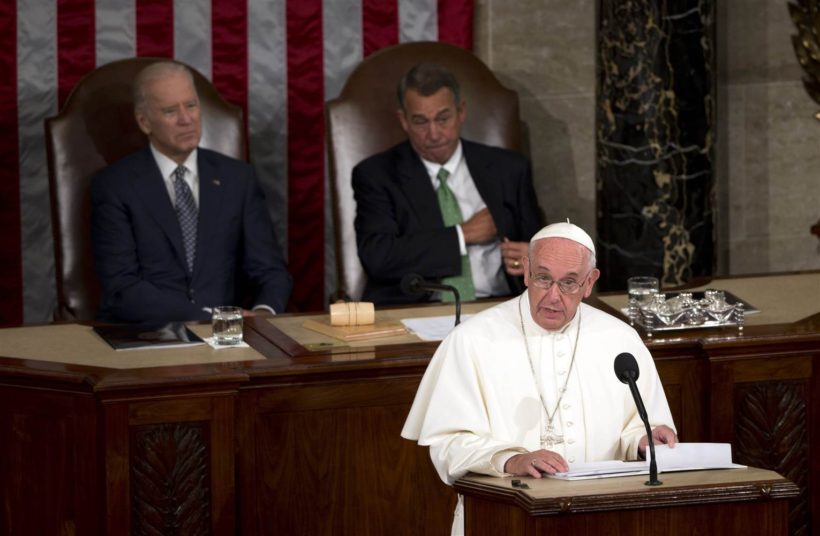 (by Stephen Collinson and Daniel Burke, CNN) Washington — In a historic address to Congress on Thursday, the first time a pope ever addressed Congress, Pope Francis challenged America to embrace millions of undocumented immigrants and join a global campaign against climate change and poverty.

Francis also called for a fairer world economy, the abolition of the death penalty…in a speech sure to please liberals.

The speech underscored the emergence of Pope Francis as a global political leader — rather than a moral or spiritual voice alone. …

…The wildly popular pontiff, who has drawn thousands onto the streets along with blanket media coverage during his U.S. visit, then headed to pray and eat with homeless people and to pose for selfies with his adoring flock.

The Pope, who was greeted by cheers as he stepped onto the floor of the House of Representatives and received several standing ovations and sustained applause during his address, did not scold lawmakers — his tone was more akin to that of a sermon or a pep talk. But he…delivered blunt political messages.

He laid out an implicit counter-argument to some conservatives, including 2016 Republican front-runner Donald Trump, who believes that the more than 10 million undocumented immigrants in the country should be deported. He implied that to do so would repudiate America’s founding purpose as a nation born of immigrants seeking a better life.

“We, the people of this continent, are not fearful of foreigners, because most of us were once foreigners,” he said, as Vice President Joe Biden and an often tearful Republican House Speaker John Boehner, both Catholics, watched from the dais.

“I say this to you as the son of immigrants, knowing that so many of you are also descended from immigrants,” Francis told the audience of lawmakers, top military brass, Supreme Court justices and Cabinet members on the floor of the House.

He made a clear connection between undocumented immigrants in the U.S. and the exodus of Syrians and others into Europe from wars raging in the Middle East.

“On this continent, too, thousands of persons are led to travel north in search of a better life for themselves and for their loved ones, in search of greater opportunities,” he said of migrants from Central and South America, indicating they needed to be treated as people seeking refuge rather than as exploiting the United States’ porous borders. …He said, “We must not be taken aback by their numbers, but rather view them as persons, seeing their faces and listening to their stories, trying to respond as best we can to their situation.”

Then…to drive home his argument, Francis said: “Let us remember the Golden Rule: ‘Do unto others as you would have them do to you.'” …

Referring to turmoil tearing apart the Middle East, Francis warned the world was increasingly a place of fundamentalism and “brutal atrocities” sometimes committed in the name of religion, but he warned against a simplistic world view pitting good versus evil or “the righteous and the sinners.”

[Regarding an issue of great importance to him] – global warming – he called for a courageous and responsible effort to avert “environmental deterioration caused by human activity” and said Congress had an “important role to play.” … Amid criticism that he is overly critical of global capitalism and dismisses its place in lifting millions of people out of poverty, Francis acknowledged that “business is a noble vocation, directed to producing wealth and improving the world.”

But he cautioned that wealth should be shared and geared to “the creation of jobs as an essential part of its service to the common good.” …

Francis, who will take part Sunday in a World Meeting of Families in Philadelphia on the last stop of his trip to the United States, also made an oblique reference Thursday to the increasing prevalence of same-sex marriage, which the Supreme Court endorsed nationwide earlier this year.

“I cannot hide my concern for the family, which is threatened, perhaps as never before, from within and without,” Francis said. “Fundamental relationships are being called into question, as is the very basis of marriage and the family.”

The Pope drew cheers, especially from the Republican side of the House, when he spoke of the need to “protect and defend human life at every stage of its development,” in a reference to abortion.

But he earned only a smattering of applause when he said that reverence for life also means supporting the global abolition of the death penalty. Francis threw his weight behind efforts to pass criminal justice reform, saying society “can only benefit from the rehabilitation of those convicted of crimes.”

There were also signs of a partisan split in the chamber when Francis mentioned global warming and immigration, which Democrats applauded while many Republicans did not. …

After his speech, Francis appeared on the Speaker’s balcony along with bipartisan leaders of Congress and smiled broadly at the thousands of people gathered below on the National Mall. He singled out children for special mention, and asked even those who had no faith and could not pray to send him good wishes.

After making brief remarks in Spanish on the balcony, Francis concluded by declaring in English, “God bless America!”

He then went to St Matthew’s Cathedral to pray with homeless people. He was mobbed by admirers outside, smiling broadly at children and posing for pictures shot on mobile phones, as Secret Service agents and Vatican officials cleared his way through the crowd.

After a simple lunch with the homeless at a Catholic charity in Washington, Francis headed to New York where he rode his popemobile through Manhattan and lead evening prayers at St Patrick’s Cathedral.

Reprinted here for educational purposes only. May not be reproduced on other websites without permission from CNN. Visit the website at cnn .com.

2. According to the reporters, what did Pope Francis’ speech underscore?

3. List the topics Pope Francis highlighted in his speech that are found in this article.

4. What would you like to have heard the Pope address that he did not mention?

5. a) Who attended Pope Francis’ historic speech to Congress?
b) Why is this significant?

6. Thousands lined the streets of Washington DC to catch a glimpse of the Pope. What does this say to you about Americans’ view of God? or do you think most people just wanted to take the day off to see a famous person? Explain your answer.

CHALLENGE QUESTION: Read the speech in its entirety.
This was the Pope’s opportunity to speak to the nation, especially to Christians (those who follow Jesus as the Son of God and redeemer of the world).  In addressing Congress, do you think his speech was more spiritual or more political? Explain your answer.

NOTE:  Some people don’t like “religion” or they blame God for many things.  The way to know who God really is is for each person to read His word, the bible, and decide about God’s truth for themselves.  You can read the bible online at biblegateway.com.

Papal visits to the U.S.:

Catholics in the U.S. and around the world:

For the full text of Pope Francis’ address to Congress, go to the Vatican website.