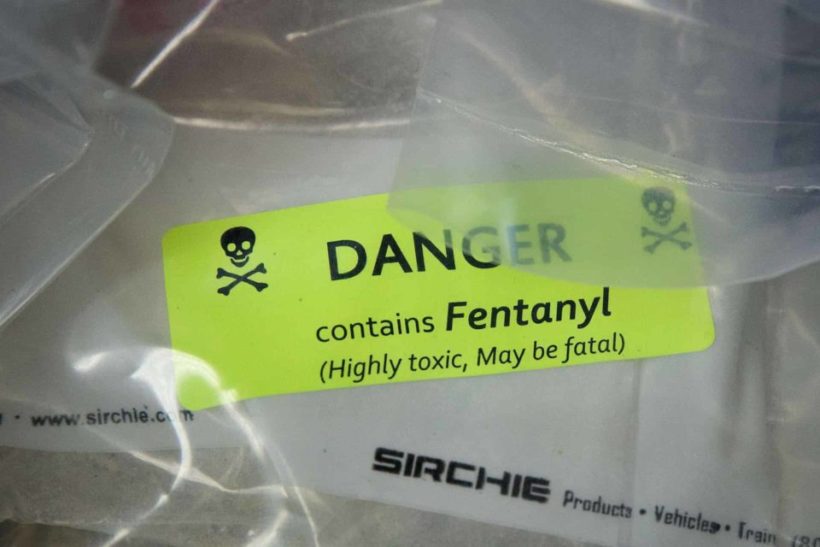 (WCPO9 Cincinnati, by staff reporters) EAST LIVERPOOL, Ohio – An East Liverpool, Ohio police officer is recovering after authorities said he accidentally touched and overdosed on fentanyl seized during an arrest.

That’s when Green noticed there was white powder on the car seat and floor, as well as on Buckle and another passenger’s shoes and clothing, East Liverpool Captain Patrick Wright said.

Green arrested the two men – Buckle and 24-year-old Cortez Collins. He then followed protocol by putting on gloves and a mask to search the car, Wright told WKBN.

When Green got back to his police station, another officer noticed he had some of the white powder on his shirt, Wright said. Green instinctively brushed at the powder while not wearing gloves.

“Just out of instinct, he tried to brush it off — not thinking,” he said.

“He’s an ex-MMA fighter, 220 pounds, solid muscle and it overtook him,” said Wright.

Police Chief John Lane told CBS Pittsburgh, “One of the officers had to catch him. He started collapsing. This stuff is very dangerous.”

Emergency workers gave Green a dose of Narcan (an opiate antidote) at the station and three more doses at the hospital.

He told WKBN the incident was a scary example of how the drug epidemic has forced police officers to change aspects of their job.

“We changed our procedures to where we used to field test-drugs,” Wright said. “We don’t do that any longer because of accidental exposures.”

Green, who is back on the job this week said of the accidental overdose,

“I started talking weird. I slowly felt my body shutting down. I could hear them talking, but I couldn’t respond. I was in total shock.”

Experts say the effects of fentanyl can be felt when absorbed through the skin or accidentally inhaled, making the drug hazardous to anyone who comes into contact with it.

From WCPO9 Cincinnati .com.au. Reprinted here for educational purposes only. May not be reproduced on other websites without permission.

(Did you miss Thursday’s EDITORIAL on civic literacy? – take the civics quizzes found there)

3. How did Officer Green touch fentanyl?

4. What happened after Officer Green touched the fentanyl without gloves?

5. How was Green treated after he overdosed?

6. How dangerous do you think the fentanyl epidemic is for first responders (police officers, EMTs, firefighters, police dogs (K9s)?

7. The City of East Liverpool said in a Facebook post ”It’s time our state government drafts legislation to protect our safety forces from these harmful drugs. Those in possession not only pose a risk to themselves but everyone they come into contact with as well.”
Do you agree with this assertion? Explain your answer.

Fentanyl, previously used only as a pharmaceutical painkiller for crippling pain at the end of life or for surgical procedures, fentanyl is now making headlines as the drug responsible for a growing proportion of overdose deaths, including that of pop star Prince.

So what is fentanyl and why is it so dangerous?

More recently, pills made to look like the painkiller oxycodone or the anxiety medication Xanax are actually fentanyl. This deception is proving fatal. It would be like ordering a glass of wine and instead getting a lethal dose of pure ethanol. While many people don’t know they are getting fentanyl, others might unfortunately seek it out as part of the way the brain disease of addiction manifests itself into compulsively seeking the next powerful high.

Every single episode of fentanyl use carries the risk of immediate death.

(excerpted from an Aug. 5, 2016 paper “Fentanyl: The dangers of this potent ‘man-made’ opioid” by Sarah Wakeman, MD)