Posted on April 5, 2016 in Backgrounders 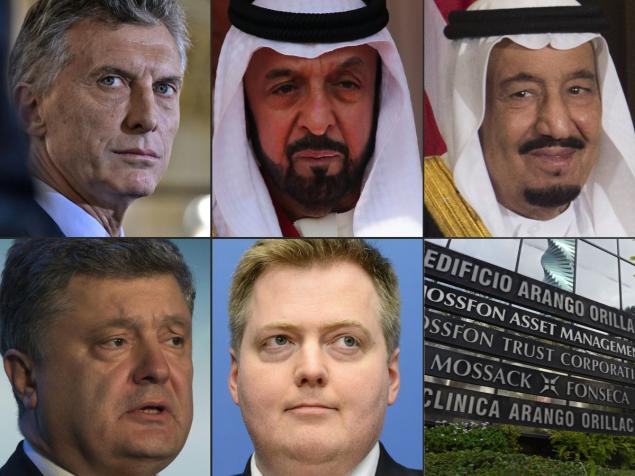 (by Jason Silverstein, NY Daily News) – The Panama Papers is the biggest journalistic leak ever. Through more than 11.5 million documents, it unveils a global web of financial corruption, with world leaders, government workers, billionaires and celebrities tied to offshore accounts and an all-controlling law firm in Panama. In sheer scope, it makes even the biggest Wikileaks bombshell look like a Napster download.

Here’s what you need to know about the leak that has rankled ranks of power worldwide.

What are the Panama Papers?

An anonymous source last year leaked an unprecedented trove of documents from the Panama law firm Mossack Fonseca – totaling 2.6 terabytes of data, about enough to fill 250 MacBooks – to the German newspaper Sueddeutsche Zeitung.

The Panama law firm Mossack Fonseca is at the center of the leak.

That triggered a reporting effort that spanned to hundreds of journalists at several international outlets, culminating in Sunday’s bombshell report published through the Washington, D.C.-based International Consortium of Investigative Journalists (ICIJ).

What do the Panama Papers reveal?

The nutshell: For at least the past 40 years, more than 130 rich, famous and/or politically powered people have hidden their fortunes in anonymous, offshore (and legal) shell companies, allowing them to skirt tax laws and make major money moves in the shadows.

That basic idea — the rich are secretly cheating international law — isn’t headline news on its own. The bigger picture in the Panama Papers is who, exactly, is involved.

Many world leaders — some of whom have previously called for crackdowns on similar schemes — are directly implicated for offshore accounts.

These include Ukrainian President Petro Poroshenko, Saudi Arabian monarch King Salma, former Prime Minister of Iraq Ayad Allawi and Iceland Prime Minister Sigmundur David Gunnlaugsson, who walked out of an interview about the damning findings. The relatives and friends of many more leaders are named as well (such as Kojo Annan, son of ex-U.N. Secretary General Kofi Annan).

Vladimir Putin is in there too, right?

Basically, the Russian president is not directly named in the documents or reports, but the leak appears to show a $2 billion ring — stretching through Putin’s bank and several of his close associates, including his best friend Sergei Roldugin — funnels back to Putin’s family.

Putin has denied any wrongdoing, with a spokesman saying Monday the president is the “main target” of an investigation attempting to harm Russia’s government.

Where are the Americans?

Surprisingly, not found in most of the Panama Papers. No American citizens are directly tied to suspected wrongdoing, and the United States isn’t even included in the ICIJ’s list of culpable countries, although the report notes that more than 600 intermediaries for the shell companies operate in America.

What’s with this law firm?

The center of this whole conspiracy is Mossack Fonseca, one of the world’s largest law firms, with more than 40 officers and 500 workers worldwide. The firm specializes in setting up shell companies for its clients, and therefore is used to keeping a low profile. The Panama Papers leak springs from emails and internal documents taken from Mossack Fonseca.

The firm declined to answer specific questions about the leak to ICJI, but denied that many of the major names in the leak are its clients. The firm also denied any knowledge of, or cooperation with, capital corruption.

“We regret any misuse of our services and actively take steps to prevent it,” the firm said in a statement.

What will happen now?

In the first day after the Panama Papers publication, no immediate action has been taken against any of the major players. But local leaders have called for some of the political powers named in the leak — including Iceland’s prime minister  — to resign.

There is no law preventing the use of shell companies as detailed in the leak. Due to their secrecy, it cannot be immediately determined if anyone named in the Panama Papers used their shell companies for illegal activities.

2. What initially led to the Panama Papers investigation?

3. Who is involved in the Panama Papers scandal? Be specific.

4. a) How does the reporter explain the Panama Papers story?
b) What is significant about those involved, according to the reporter?

5. How did Russian President Vladimir Putin respond to the implication that he is involved?

7. What is the expected outcome of the Panama Papers revelation?

Some of those named in the Panama Papers include:

KOJO ANNAN – Son of ex-U.N. Secretary General Kofi Annan
The only son of former U.N. head Kofi Annan courted controversy in 1998, when a firm of his won a big contract under the U.N.’s Oil-for-Food humanitarian program in Iraq. An inquiry eventually cleared father and son of any corruption in the deal. Internal Mossack Fonseca documents show Koji Annan has held several offshore shell companies, using one to purchase a half-million-dollar apartment in central London. A spokesman for Annan said his business was for “normal, legal purposes of managing family and business matters and has been fully disclosed in accordance with applicable laws.”

KING SALMAN BIN ABDULAZIZ BIN ABDULRAHMAN AL SAUD – King of Saudi Arabia
Through a series of British Virgin Islands shell companies, the Saudi king appears to have taken out several luxury mortgages for houses in London — at least $34 million worth — and held “a luxury yacht the length of a football field.” The king did not answer the ICIJ’s requests for comment.

AYAD ALLAWI – Former Iraqi Prime Minister
A wealthy Iraqi exile who helped lead the push for war with Saddam Hussein, Allawi returned to Iraq to serve as prime minister in 2004. He also served as vice president as recently as last year. From 1985 to 2013, Mossack Fonseca helped run his Panama-registered company I.M.F. Holdings Inc. I.M.F. owned a house in Kingston upon Thames, England worth roughly $1.5 million, and another offshore company of his, Moonlight Estates Ltd., held a property in London. Representatives for Allawi confirmed that he “is the sole director and shareholder of Foxwood Estates Limited, Moonlight Estates Limited and IMF Holdings Inc.,” adding that he ran many of his house purchases through anonymous offshores “in light of an assassination attempt on him.” Indeed, he survived an attempt on his life in 1978, presumably by Saddam Hussein.

MAURICIO MACRI – President of Argentina
Macri — who as president has vowed to fight corruption — is listed, with his Italian tycoon father Francisco and brother Mariano, as a director of Fleg Trading Ltd., incorporated in the Bahamas in 1998 and dissolved in January 2009 — a financial connection Macri didn’t disclose on asset declarations when he was mayor of Buenos Aires. His spokesman said he didn’t list Fleg Trading Ltd. as an asset because he had no capital participation in the company. The company, used to participate in interests in Brazil, was related to the family business group. “This is why Maricio Macri was occasionally its director,” he said, reiterating that Macri was not a shareholder.

SIGMUNDUR DAVID GUNNLAUGSSON – Prime Minister of Iceland
A radio personality who led the Progressive Party to victory after the financial crisis of 2008, Gunnlaugsson and his wealthy wife owned a British Virgin Islands shell company called Wintris Inc., that held nearly $4 million in bonds in Iceland’s three major banks. He failed to declare his ownership of Wintris on entering the Parliament in 2009. In March, a TV interviewer asked Gunnlaugsson if he had ever owned an offshore company. “Myself? No,” he said, adding: “Well, the Icelandic companies I have worked with had connections with offshore companies.” A spokesman told the ICIJ that Gunnlaugsson and his family had followed all Icelandic laws.

PETRO POROSHENKO – President of Ukraine
Known as Ukraine’s billionaire “chocoloate king,” Poroshenko swept into office in 2014 vowing reforms that have not yet come. He became the sole shareholder of Prime Asset Partners Limited in 2014, as Russian troops invaded Eastern Ukraine. The following year, Poroshenko vowed to sell most of his assets; news reports said they ultimately ended up in “Prime Asset Capital.” His spokesman told the ICIJ said that “creation of the trust and related corporate structures had no relation to political and military events in Ukraine,” adding that his assets held by an independently managed fund — Prime Asset Capital.

RAMI AND HAFEZ MAKHLOUF – Cousins of Syrian dictator Bashar al-Assad
“For years, any foreign company seeking to do business in Syria had to be cleared by Rami, who controlled key economic sectors such as oil and telecommunications. Hafez, a general in charge of Syria’s intelligence and security apparatus, has been suspected of helping his older brother intimidate business rivals.” The cousins have been subjected to international financial sanctions and appear to have used multiple offshore accounts to siphon wealth from Syrian industry and avoid freezes on their assets. In early 2011, emails show employees at Mossack Fonseca discussing U.S. sanctions and allegations of bribery and corruption made against members of the Makhlouf family. By that June, Mossack had cut its ties with the Makhloufs.

FAMILY OF NAWAZ SHARIF – Prime Minister of Pakistan
For years, Sharif, a longtime presence in Pakistani politics, has had to answer questions about his family’s “riches from a network of businesses that include steel, sugar and paper mills and extensive international property holdings,” ICIJ says. Mossacks’ documents show a series of offshore companies operated by Sharif’s children, Mariam, Hussein and Hasan, including one to hold “a UK property each for use by the family” and others that moved millions in assets. Mossack Fonseca resigned from a company Hasan directed in 2007, calling him “a politically exposed person.” The Sharif family did not respond to the ICIJ’s requests for comment.

ARKADY AND BORIS ROTENBERG – Lifelong friends of Russian President Vladimir Putin
The billionaire brothers grew up with Putin and have benefited richly from his turns as Russia’s president and prime minister. The U.S. has sanctioned their wealth over alleged corruption, particularly allegations profited over contracts from the 2014 Sochi Olympics. They ran at least seven British Virgin Islands shell companies “involved in everything from investing in a major pipeline construction company… to buying equipment for the construction of an Italian villa in Tuscany for Arkady’s son.”

SERGEY ROLDUGIN – Close personal friend of Putin
Widely known as one of the world’s better cellists, Roldugin has been close to Putin since the 1970s, when the future president worked in the Soviet KGB. Documents show Roldugin owned three shell companies, two of which were funded by a Russian organ that the U.S. government calls “Russia’s ‘personal bank for senior officials.’” Through those companies, Roldugin appears to hold significant shares of Kamaz, Russia’s largest truckmaker, and a major state media corporation.

IAN CAMERON – Father of British Prime Minister David Cameron
The father of Great Britain’s current Conservative Prime Minister died in 2010, having amassed a fortune in smart investments. According to the documents, “Cameron helped create and develop Blairmore Holdings Inc. in Panama in 1982 and was involved in the investment fund until his 2010 death.” Blairmore was valued at $20 million in 1998 and was promoted to investors in brochures as “not liable to taxation on its income or capital gains.” The promotional literature added that Cameron’s fund “will not be subject to United Kingdom corporation tax or income tax on its profits.”

Watch an interview with Gerard Ryle, Director of the International Consortium of Investigative Journalists (Washington D.C.):