Posted on February 23, 2016 in Backgrounders 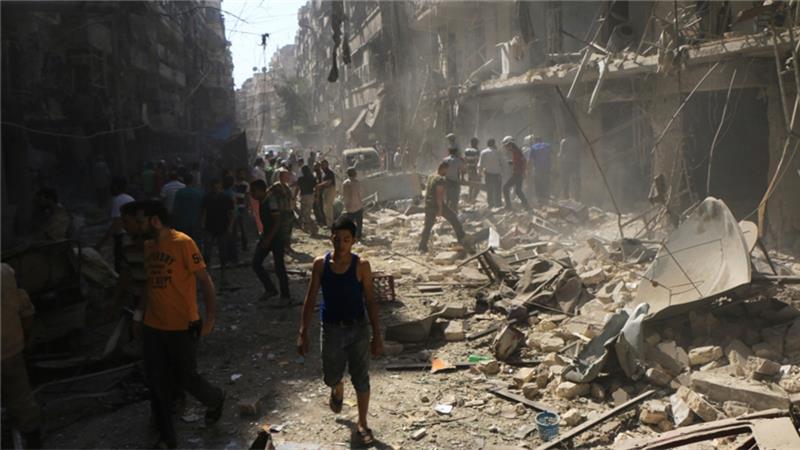 (by BBC News) – More than 250,000 Syrians have lost their lives in four-and-a-half years of armed conflict, which began with anti-government protests before escalating into a full-scale civil war. More than 11 million others have been forced from their homes as forces loyal to President Bashar al-Assad and those opposed to his rule battle each other – as well as jihadist militants from so-called Islamic State. This is the story of the civil war so far, in eight short chapters.

Violence escalated and the country descended into civil war as rebel brigades were formed to battle government forces for control of cities, towns and the countryside. Fighting reached the capital Damascus and second city of Aleppo in 2012.

The conflict is now more than just a battle between those for or against Mr. Assad. It has acquired sectarian overtones, pitching the country’s Sunni majority against the president’s Shia Alawite sect, and drawn in regional and world powers. The rise of the murderous jihadist group Islamic State (IS/ISIS) has added a further dimension.

Hundreds of [civilians] were killed in August 2013 after rockets filled with the nerve agent sarin were fired at several suburbs of Damascus. Western powers said it could only have been carried out by Syria’s government, but the government blamed rebel forces.

Facing the prospect of US military intervention, President Assad agreed to the complete removal and destruction of Syria’s chemical weapons arsenal.

The operation was completed the following year, but the Organization for the Prohibition of Chemical Weapons (OPCW) has continued to document the use of toxic chemicals in the conflict. Investigators found chlorine was used “systematically and repeatedly” in deadly attacks on rebel-held areas between April and July 2014.

IS has also been accused of using homemade chemical weapons, including sulphur mustard. The OPCW said the blister agent was used in an attack on the northern town of Marea in August 2015 that killed a baby.

More than 4.5 million people have fled Syria since the start of the conflict, most of them women and children. Neighboring Lebanon, Jordan and Turkey have struggled to cope with one of the largest refugee exoduses in recent history. About 10% of Syrian refugees have sought safety in Europe [most of them young men], sowing political divisions as countries argue over sharing the burden, [with citizens concerned about the huge influx of young Muslim men into their communities].

A further 6.5 million people are internally displaced inside Syria, 1.2 million were driven from their homes in 2015 alone.

The UN says it will need $3.2bn to help the 13.5 million people, including 6 million children, who will require some form of humanitarian assistance inside Syria in 2016. About 70% of the population is without access to adequate drinking water, one in three people are unable to meet their basic food needs, and more than 2 million children are out of school, and four out of five people live in poverty.

The warring parties have compounded the problems by refusing humanitarian agencies access to civilians in need. Up to 4.5 million people in Syria live in hard-to-reach areas, including nearly 400,000 people in 15 besieged locations who do not have access to life-saving aid.

6. Rebels and the rise of the jihadists

With neither side able to inflict a decisive defeat on the other, the international community long ago concluded that only a political solution could end the conflict in Syria. The UN Security Council has called for the implementation of the 2012 Geneva Communique, which envisages a transitional governing body with full executive powers “formed on the basis of mutual consent”.

Mr. Brahimi’s successor, Staffan de Mistura, focused on establishing a series of local ceasefires. His plan for a “freeze zone” in Aleppo was rejected, but a three-year siege of the Homs suburb of al-Wair was successfully brought to an end in December 2015.

At the same time, the conflict with IS lent fresh impetus to the search for a political solution in Syria. The US and Russia led efforts to get representatives of the government and the opposition to attend “proximity talks” in Geneva in January 2016 to discuss a Security Council-endorsed road map for peace, including a ceasefire and a transitional period ending with elections.

What began as another Arab Spring uprising against an autocratic ruler has mushroomed into a brutal proxy war that has drawn in regional and world powers.

Iran and Russia have propped up the Alawite-led government of President Assad and gradually increased their support. Tehran is believed to be spending billions of dollars a year to bolster Mr. Assad, providing military advisers and subsidized weapons, as well as lines of credit and oil transfers. Russia has meanwhile launched an air campaign against Assad’s opponents.

The Syrian government has also enjoyed the support of Lebanon’s Shia Islamist Hezbollah movement, whose fighters have provided important battlefield support since 2013.

The Sunni-dominated opposition has, meanwhile, attracted varying degrees of support from its international backers – Turkey, Saudi Arabia, Qatar and Jordan, along with the US, UK and France.

Until late 2015, rebel appeals for anti-aircraft weapons to stop devastating government air strikes were rejected by the US and its allies, amid concern that they might end up in the hands of jihadist militants. A US program to train and arm 5,000 rebels to take the fight to IS on the ground also suffered a series of setbacks before being abandoned [due to its complete failure].