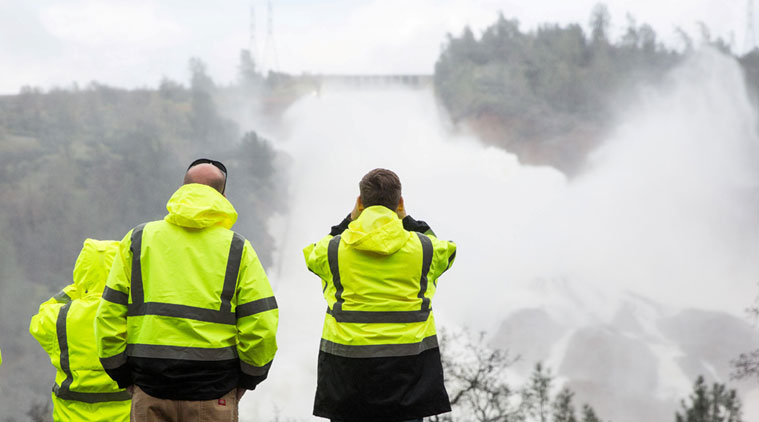 California Department of Water Resources personnel monitor water flowing through a damaged spillway on the Oroville Dam in Oroville, California, US, on February 10, 2017. (Source: Reuters)

(by Eliott C. McLaughlin and Paul Vercammen, CNN) — [At least 188,000 people will have to stay away from their homes as crews work to calm the potential flood danger around a dam’s troubled emergency spillway in northern California Monday, emergency officials said.]

The residents, mostly in Butte, Sutter and Yuba counties, evacuated from the area, some being given only minutes to gather their things.

“Everyone was running around; it was pure chaos,” Oroville resident Maggie Cabral told CNN affiliate KFSN on Sunday. “All of the streets were immediately packed with cars, people in my neighborhood grabbing what they could and running out the door and leaving. I mean, even here in Chico, there’s just traffic everywhere.”

The area had long been in drought until this year when heavy rain and snow bombarded the state. In Oroville, the average annual rainfall is about 31 inches, but since October, the Feather River, which begins at Lake Oroville, had already seen 25 inches of rain as of Saturday, according to the California Department of Water Resources [DWR].

The lake also gets water from the northern Sierra Nevada mountain range, which is experiencing one of its wettest seasons.

…No rain is predicted until Wednesday. [And as of Monday], efforts to lower the water level on Lake Oroville appeared successful, a DWR official said. The Oroville Dam provides flood control for the region. The dam has two spillways to release water out of the lake to prevent overflow. Both have problems.

In the main spillway, which is…paved, erosion has caused a hole almost the size of a football field and at least 40-feet deep to form in the lower part of the channel. It can’t be fixed immediately. …

The emergency spillway, which is an embankment covered with trees, is a last resort and was used for the first time in history on Saturday when the lake topped 901 feet, its capacity, and a light flow of water washed into the spillway.

DWR and CAL FIRE crews quickly began clearing the brush, trees and rocks to limit the amount of debris washing into the lake’s diversion pool and the Feather River. … The erosion of the emergency spillway is dangerous because “when you start to erode the ground, the dirt and everything else starts to roll off the hill,” said Kevin Lawson, a CAL FIRE incident commander. “It starts to undermine itself. If that is not addressed, if that’s not mitigated properly, essentially what we’re looking at is approximately a 30-foot wall of water.”

…On Sunday afternoon, Sheriff Honea’s office issued a dire warning, employing the most urgent of language — “This is NOT a drill” — in imploring residents to evacuate. At the time, officials said the spillway was in danger of failing any minute.

The evacuation order included “all Yuba County on the valley floor” and the city of Marysville, authorities said.

The DWR instructed Oroville residents to head north, toward Chico.

Conversely, the Yuba County Office of Emergency Services warned its residents, “Take only routes to the east, south, or west. DO NOT TRAVEL NORTH TOWARD OROVILLE!!!!!”

The Sacramento Fire Department echoed the urgency and warned residents that the spillway failure could have effects, including flash flooding, 75 miles downstream in Sacramento.

Stores closed. Shelters opened. Police manned roadblocks. Evacuees waited in traffic trying to escape low-lying areas. Residents mobbed gas stations on their way out of town. By early Monday, many of the pumps at those gas stations had yellow tape across them, indicating they were out of gas. Sean Dennis, who lives 30 miles south of Oroville, spoke to CNN from his car after spending 4½ hours in heavy traffic.

“It was pretty scary, just because of how fast everything was developing,” he said. “Me and my wife managed to throw as much stuff as we could into garbage bags, whatever we could find. We got both of our cars loaded down pretty well. We’re not taking any chances.”

The urgency later subsided, with authorities reporting that the situation was not as desperate as previously thought. Still, Sheriff Honea said he wasn’t taking any chances.

“I’m not going to lift the evacuation order until I have a better idea of what that means and what risk that poses,” he said late Sunday night.

…After issuing the evacuation orders, authorities noted significant decreases in the water coming over the emergency spillway.

The flow of water on the emergency spillway eventually stopped Sunday night as the DWR withdrew more water from the other spillway. …

“We want to drop that water level before the next storm hits Wednesday,” Doug Carlson, Spokesman for DWR told CNN earlier. “It’s supposed to be a colder storm, which is good. Last week the rain storm was warmer. So we had both the rain runoff and the warmer rain melting the snow and that snow melt also flowed into the lake.”

Reprinted here for educational purposes only. May not be reproduced on other websites without permission from CNN. For the original article, visit CNN.com.

1. What are the Oroville Dam’s two spillways used for?

2. When was the last time the emergency spillway was used?

3. A spillway is a passage for surplus water from a dam. What is the problem with the main spillway at Oroville Dam?

4. a) What did authorities discover on Sunday about Oroville’s emergency spillway?
b) Why is this situation so dangerous, according to CAL FIRE commander Kevin Lawson?

5. What immediate actions did authorities take upon learning of the danger?

6. How many people were evacuated from the area Sunday, with less than an hour’s notice (some with just minutes)?

7. What warning did the Sacramento Fire Department issue?

8. After the evacuation, the urgency later subsided, with authorities reporting that the situation was not as desperate as previously thought. Why did Sheriff Honea keep the evacuation order in place?

NOTE: Lake Oroville is the largest reservoir in the California State Water Project, a network of canals and pumping stations that move water from Northern California to the Central Valley and Southern California. It’s one of the key reservoirs in the system that stores water for the dry spring and summer months.

The LA Times reported on Monday: