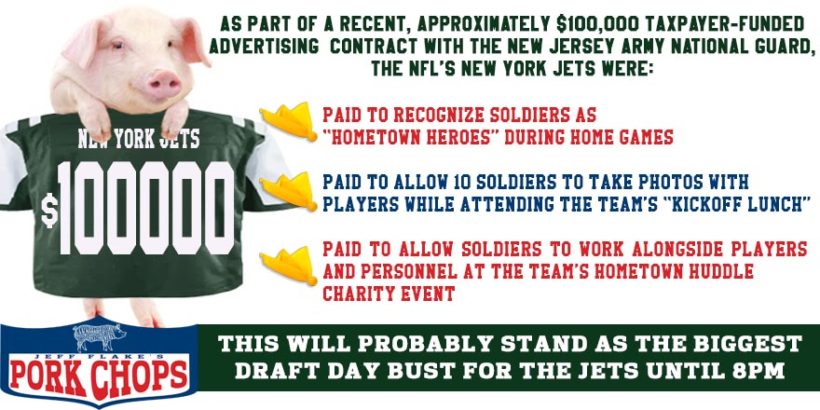 (by Christopher Baxter and Jonathan D. Salant – NJ.com) TRENTON — When the Jets paused to honor soldiers of the New Jersey Army National Guard at home games during the past four years, it was more than a heartfelt salute to the military – it was also worth a good stack of taxpayer money, records show.

The Department of Defense and the New Jersey National Guard paid the Jets a total of $377,000 from 2011 to 2014 for the salutes and other advertising, according to federal contracts. Overall, the Defense Department has paid 14 NFL teams $5.4 million during that time, of which $5.3 million was paid by the National Guard to 11 teams under similar contracts.

“[We] go to [games] and see them honoring the heroes,” Flake said in an interview. “You get a good feeling in your heart. Then to find out they’re doing it because they’re compensated for it, it leaves you underwhelmed. It seems a little unseemly.”

The agreement includes the Hometown Hero segment, in which the Jets feature a soldier or two on the big screen, announce their names and ask the crowd to thank them for their service. The soldiers and three friends also get seats in the Coaches Club for the game.

“They [know] the public believes they’re doing it as a public service or a sense of patriotism,” Flake said. “It leaves a bad taste in your mouth.”

Also, soldiers attended the annual kickoff lunch in New York City to meet and take pictures with the players for promotional use, and the Jets allowed soldiers to participate in a charity event in which coaches and players build or rebuild a playground or park.

A spokesman for the Guard, Patrick Daugherty, said in a statement the agreement was a tool to recruit and retain soldiers.

“Promoting and increasing the public’s understanding and appreciation of military service in the New Jersey Army National Guard increases the propensity for service in our ranks and garners public support for our Hometown Team,” Daugherty said.

A Jets spokesman, Bruce Speight, said the team has “consistently supported all five branches of the U.S. armed forces” and that commitment was separate and independent from the Jersey Guard’s sponsorship of the team.

“As with all of our sponsors, we have worked with the National Guard to create tailored advertising and marketing programs to meet their specific objectives which in this case was recruitment and retention by targeting our fans and audience through media and stadium assets controlled by the team,” Speight said. …

Records show the Jets were not alone in contracting with the military. Other teams, such as the Indianapolis Colts and Baltimore Ravens, have also received money under similar agreements. No money has gone to the Giants or Eagles, records show.

Flake said there was nothing wrong with the Guard using football games to recruit soldiers. The problem, he said, was spending taxpayer money on a program that, on its face, appeared to be a generous gesture by a football team.

“We need to recruit and what better place to find young men and women than at a ballgame?” Flake said. “But when the team is honoring the heroes, that’s the action I think rubs people the wrong way.”

Reprinted here for educational purposes only. May not be reproduced on other websites without permission from NJ .com. Visit the website at NJ .com.

1. How much did the U.S. Department of Defense and the New Jersey Army National Guard pay the Jets football team over 4 years?

3. How much did the Department of Defense pay overall to the NFL teams over the same time period?

4. a) Who publicized this information?
b) How does he view the government’s practice? (What did he say about it?)

6. a) How does Jets spokesman Bruce Speight contradict the actual federal contracts explained in paragraph 2?
b) What do you think of his explanation?

7. What is the difference between paying to advertise and paying to honor heroes? Why would one be OK and the other wrong?

8. Do you think the revelation that some NFL teams honored our military heroes because they were paid to do so will affect how the public view any mention/honor of a military member during any sports event? Explain your answer.