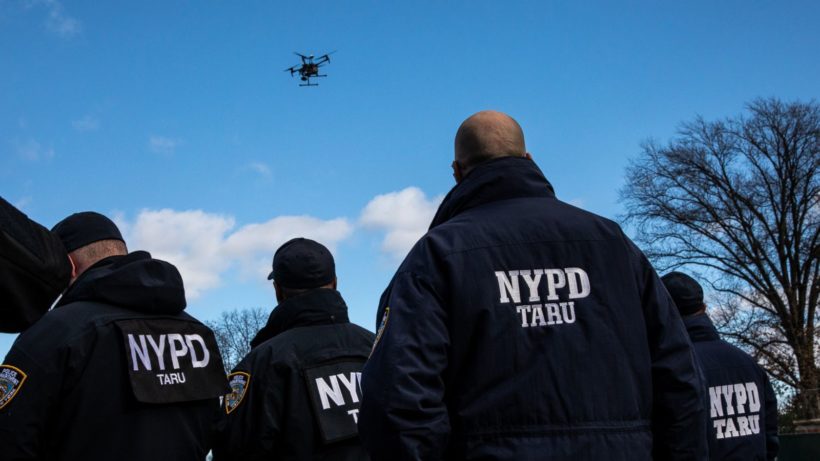 (by Darran Simon, CNN) – The nation’s largest police force has unveiled a fleet of drones that will be used in hostage situations and search and rescue operations, but [the New York branch of the ACLU claims] the drones might be used to invade privacy.

The New York City Police Department said Tuesday the drones in its unmanned aircraft system program will be deployed in incidents involving hazardous spills and used to document crime scenes and collisions. They will also monitor pedestrians and traffic at large events [including Times Square on New Year’s Eve, as well as search-and-rescue operations, as hostage situations and for accessing hard-to-reach crime scenes, a department spokeswoman told the NY Post].

The unmanned aerial vehicles [drones] will help the NYPD gather key information as situations unfold before officers arrive, lessening the danger to them, the agency said.

The New York Civil Liberties Union said the department’s drone policy isn’t restrictive enough to protect the privacy of New York residents. An NYPD commander said the agency is aware of the concerns about the drone program.

“So, let me be clear, NYPD drones will not be used for warrantless surveillances,” Chief of Department Terence Monahan told reporters. “NYPD drones will be used to save lives and enhance our response in emergency situations.”

The NYPD fleet of 14 drones is comprised of 11 small drones for tactical operations and two large weather-resistant drones with features that include thermal imaging capabilities, a powerful zoom camera and 3D mapping, the NYPD said. One drone can be used for training and testing.

“As the largest municipal police department in the United States, the NYPD must always be willing to leverage the benefits of new and always-improving technology,” NYPD Commissioner James P. O’Neill said in a news release.

“Our new Unmanned Aircraft System program is part of this evolution — it enables our highly trained cops to be even more responsive to the people we serve, and to carry out the NYPD’s critical work in ways that are more effective, efficient, and safe for everyone.” O’Neill noted.

Officers with the department’s Technical Assistance Response Unit have been trained to use the drones and will operate them, the NYPD said.

More than 900 police, fire and emergency units nationwide use drones in some form, the NYPD said. State lawmakers around the country are weighing benefits of the technology, the economic impact and privacy concerns, among other issues, as they debate how and if the unmanned aircraft systems will be regulated, according to the National Conference of State Legislatures.

Forty-one states have enacted laws concerning the unmanned aerial vehicles, including how law enforcement and the public are allowed to use them, among other issues, according to the National Conference of State Legislatures. Three additional states have adopted resolutions.

In a statement, New York Civil Liberties Union Associate Legal Director Christopher Dunn said, “The NYPD’s drone policy places no meaningful restrictions on police deployment of drones in New York City and opens the door to the police department building a permanent archive of drone footage of political activity and intimate private behavior visible only from the sky.”

The NYPD said the unmanned aerial vehicles are prohibited from being used for routine patrol or traffic enforcement. [The department spokeswoman also noted the machines will not be used as weapons, nor will they be equipped with any.]

NYPD officials said they met other police departments to learn about their programs and solicited feedback from the City Council and advocates.

The New York Civil Liberties Union confirmed the NYPD provided the organization with a draft policy, met with them about the drone program and responded to the organization’s comments.

“Police cameras in the skies of New York City offer a new frontier for both public safety and abuses of power. When the NYPD provided us with an early look at a draft policy that would govern the department’s deployment of drones, the NYCLU expressed serious concerns. The NYPD did make some changes, but we continue to believe the NYPD’s drone program poses a serious threat to New Yorkers’ privacy,” Dunn said in the statement.

CNN’s Rob Frehse contributed to this report. Reprinted here for educational purposes only. May not be reproduced on other websites without permission from CNN.

2. What is the purpose for the drones, according to the department?

3. Why is the New York branch of the ACLU opposed to the NYPD’s use of drones?

4. How did the NYPD address ACLU concerns/criticism? Be specific.

5. a) List the number and type of drones acquired by the NYPD.
b) Who will operate the drones?

6. a) How many other departments across the country use drones in some form?
b) How many states have enacted laws or adopted resolutions regarding drones?

7. The ACLU said in a statement, “The NYPD did make some changes, but we continue to believe the NYPD’s drone program poses a serious threat to New Yorkers’ privacy.”
As technology advances, privacy advocates have expressed serious concerns first over surveillance cameras at red lights and most recently over the use of drones by law enforcement. They suggest there is potential for abuse of power and violation of privacy.
Consider the fact that many businesses and private homes have surveillance cameras. Currently, anyone can buy and use a drone.
a) Should people only be concerned about police drones in the skies, or also (to a greater or lesser extent) about your neighbor’s drone hovering over your yard or outside your window?
b) ISIS terrorists have called for/threatened to carry out attacks in NYC on New Year’s Eve. If you attended this event, or any outdoor concert, sporting event, recreational activity etc. where there was a large crowd and potential or known threats by terrorists, should police use drones in these instances?
c) In what, if any, situations do you think the use of drones by law enforcement is a good idea? (Consider the fact that terrorists or even regular criminals, don’t need to check with the ACLU before utilizing the latest technology.)

From a NY Post article: NYPD to use new drones over Times Square on New Year’s Eve, by Amanda Woods:

The city’s new crime-fighting drones will hover over crowds of revelers in Times Square on New Year’s Eve, an NYPD official said Wednesday.

“This way we can monitor the large crowds, the traffic flow, but they will be on a tether, which means like a long cable that is directly attached to the drone, and it’s in one specific area that will be cordoned off,” Chief of Department Terence A. Monahan said during an appearance on “Good Day New York.”

There’s no chance that a malfunctioning device could crash onto the gathering crowd, Monahan insisted. “If it comes crashing down, it’s going to crash down in an area where there is nobody,” he added. …

NYPD drones could have made a significant difference in the 2013 search for missing autistic teen Avonte Oquendo, whose remains were discovered three months after he disappeared from his Queens school, according to Monahan.

“He walked into a very deeply wooded area,” Monahan said. “It took days to search it. We had to cut down thickets all over the place. Now we’d be able to send a drone through that area, and with its thermal sensing, if there was any heat in that area, we’d know exactly where to look.”

Footage on the drones will be stored for 30 days, and then wiped clean unless it’s needed for a criminal prosecution, he said.