Millions remain in the dark in Texas as Midwest, South endure deep freeze 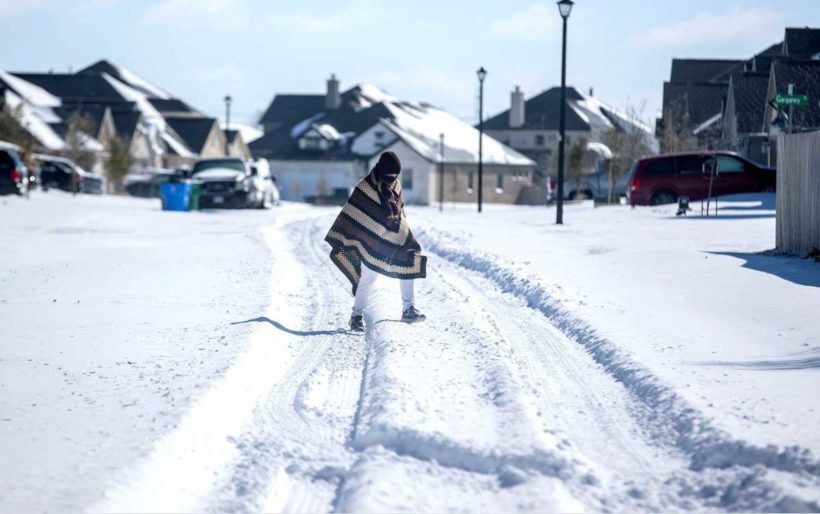 A neighborhood without electricity as snow covers the BlackHawk neighborhood in Pflugerville, near Austin, TX, February 15, 2021. (Reuters)

(by Clyde Hughes and Danielle Haynes at UPI, with AccuWeather) — Millions of people in Texas were without power for the third day Wednesday owing to the major winter storms that spanned a large swath of the United States and produced rare snowfall in the Lone Star State.

The first round of storms arrived early this week, bringing snow and bitter cold temperatures across Texas and other parts of the Midwest and Southeast.

AccuWeather reported that a record 73% of the continental United States was covered with snow, topping the old mark of 71% from 2011. At this time last year, the snow coverage across the country was 35%.

With ongoing rolling blackouts and so-called “controlled blackouts” in Texas since Sunday, a peak of more than 4 million customers have lost power in recent days. About 3.2 million were without electricity midday Wednesday, according to poweroutage.us.

Utility officials said the outages could last for several more days, with temperatures not expected to move above freezing in Texas until Friday.

The state began rolling blackouts across Texas on Monday to reduce demand as low temperatures forced more power sources offline than expected. The state’s electrical grid struggled to handle demand when the cold front first arrived over the weekend.

Hundreds of thousands of customers in Oregon, Kentucky, Louisiana and West Virginia were also without electricity. Some power outages were reported in New Orleans, which saw muted Mardi Gras celebrations this week due to the weather and the COVID-19 pandemic.

Kentucky Gov. Andy Beshear warned Wednesday that storms have caused damage to the infrastructure that delivers electricity to homes, meaning power outages there could last into next week.

“Our issues are different than what they’re facing in Texas, though some of the natural gas is impacting some of our cities,” he said during a briefing.

Frigid cold was reported across the Midwest on Wednesday, including below-zero temperatures in Oklahoma City, Dallas and San Antonio, Texas, which set a record low on Tuesday — topping a mark set in 1895.

Lincoln, Neb., which recorded a low of -31 degrees Fahrenheit on Tuesday, set a record low on Wednesday morning.

…Ice also was a major problem across the storm system. Several states urged residents to stay home and avoid driving. Dozens of vehicle crashes occurred across the region related to the severe weather.

Hundreds more flights were canceled at major airports in the South and Midwest, including Dallas, Houston, Nashville and Atlanta, according to FlightAware. There were 2,400 flights into and out of the United States canceled Wednesday, with Dallas-Fort Worth International and Houston Bush Intercontinental airports the hardest hit.

On Galveston Island along the Texas Gulf Coast, officials placed the city under a Stage 5 water restriction after major water pipe breaks. Residents were asked to limit water use, including showers and lawn care.

Another winter storm was expected to affect the Ohio Valley and New England in the coming days, after it moves on from the southern Plains.

As many as 12 inches of snow — and as much as 2 feet in higher elevations — were expected from West Virginia to Maine.

Published at UPI on Feb. 17, with AccuWeather. Reprinted here for educational purposes only. May not be reproduced on other websites without permission.

1. For how long have millions been without power in Texas?

2. a) How much of the U.S. is covered with snow, according to AccuWeather?
b) How does this compare with snow coverage last year?

3. a) What is a rolling blackout? Be specific — How does it work? What is its purpose?
b) What do you think the reporter means by a “controlled blackout”?

4. When will Texans see power restored?

5. a) In what other states have residents lost power?
b) What is the cause of power outages in Kentucky?

6. What are some of the other effects of the winter storms?

7. Read today’s opinion “A Deep Green Freeze” and answer the questions at the bottom.

A Feb. 17 report by The Weather Channel: