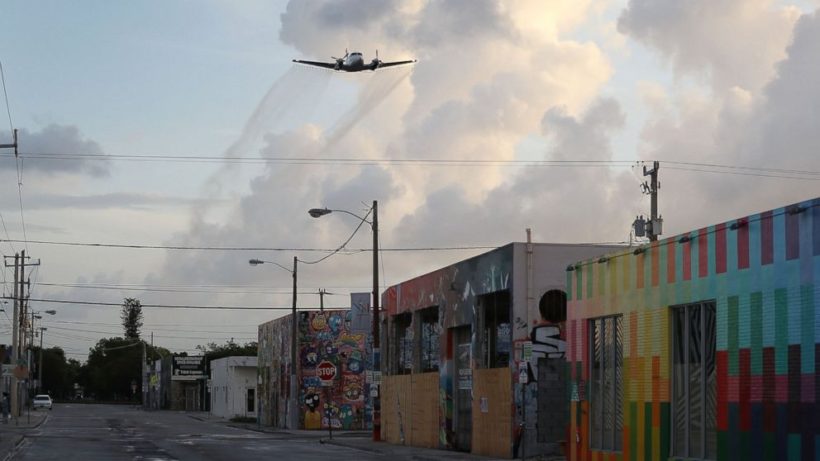 “It’s very benign to humans,” said Laura McGowan, spokesperson of Clarke, the company hired by Miami-Dade County to spray the bacteria. “BTI attacks the actual larva of the mosquito, getting into their gut and making it so they can’t process food and that they can’t develop.”

In August, the county began aerial spraying in Wynwood – a Zika zone north of Downtown Miami, alternating between BTI and a powerful neurotoxin called Naled.

“Naled… can essentially kill anything,” said Tanjim Hossain, a graduate research fellow at the University of Miami. “When a droplet of the insecticide touches a mosquito, it kills the mosquito pretty much instantaneously.”

Though effective, Naled is controversial. The insecticide was banned from the European Union and protested in Puerto Rico — one of the hardest-hit Zika zones in the world. Officials there say Naled is dangerous for pregnant women and could result in their babies developing behavioral issues.

But the CDC and the EPA both insist it’s safe. Florida Governor Rick Scott said the CDC is recommending Miami Beach use helicopters to spray BTI. But Miami Beach Commissioner Michael Grieco said the people in his community are opposed to the aerial spraying.

“They definitely don’t want it here,” Grieco said. “The governor has a job to do but at the same time he’s not boots on the ground here in Miami Beach. We are. We know what the people in Miami Beach want.”

Grieco is calling on Miami-Dade County to stop using Naled altogether when they spray, even though it’s proven to be effective. CBS News has contacted the CDC, who said that the decision whether or not to aerial spray is ultimately up to Miami Beach.

1. What is Zika? How is it spread? What effect does the Zika virus have on humans?

5. Why is Naled controversial?

In August, the CDC announced that pregnant women should avoid traveling to Miami-Dade county. This area is a top tourist destination that generates a lot of its revenue from tourists. Many of its businesses/employment depend on tourism.
a) If the CDC and EPA say Naled is safe and effective, should it be used? Explain your answer.
b) Would being a resident of Miami-Dade affect your answer? Please explain.
c) Ask a parent the same questions.

8. Read the Background below. If Zika MIGHT cause microcephaly in even a tiny percentage of babies born, what should be done to solve this problem?

Once someone has been infected with Zika, it’s very likely they’ll be protected from future infections. There is no evidence that past Zika infection poses an increased risk of birth defects in future pregnancies. (from Centers for Disease Control and Prevention (CDC) website)

From a Feb. 9, 2016 commentary by Dr. Jane M. Orient at HeartlandInstitute:

Zika virus disease (ZVD) is carried by the same mosquito, Aedes aegypti, as other Third World diseases, including dengue and chikungunya.

Zika is asymptomatic [producing or showing no symptoms] in about 80 percent of infected individuals. In about 20 percent, it causes a mild, self-limited disease with fever, rash, joint pains, and conjunctivitis (red eyes).

Some 4,000 babies in Brazil have reportedly been born with severe birth defects, including microcephaly (small head), and officials suspect Zika is the cause.

On Feb 1, the World Health Organization (WHO) declared a Public Health Emergency of International Concern, the same category as Ebola. American health authorities issued a travel advisory for pregnant women planning to visit Brazil or many other countries in Latin America or the Caribbean.

Zika is [not] new. It was first identified in humans in 1947 in Uganda’s Zika Forest. What is new…is the association with microcephaly and other fetal harm.

There is, however, still no definitive proof that microcephaly and associated defects are caused by Zika. Some interesting facts:

Read about the Zika virus at the Centers for Disease Control and Prevention (CDC) website.

Read the CDC’s Visit the Facts about Microcephaly page at the CDC website. page.