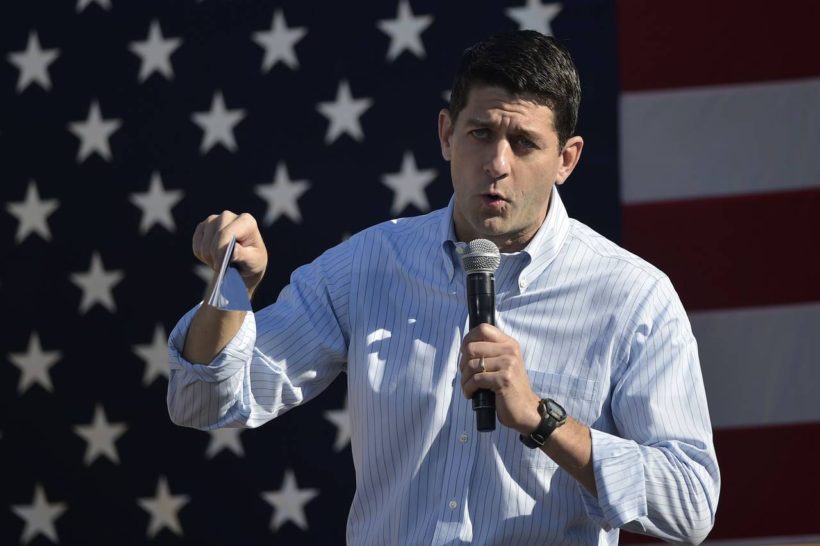 (by Mark Z. Barabak and Lisa Mascaro, Los Angeles Times) – With election day less than a month off, Republicans faced an extraordinary breach in party ranks Monday as House Speaker Paul Ryan declared he would no longer defend presidential nominee Donald Trump and instead focus on preserving the GOP’s majority in Congress.

Without formally withdrawing his endorsement, Ryan nonetheless delivered a stinging blow to Trump, urging Republican lawmakers in a conference call to do whatever they needed to win Nov. 8 — even if it meant cutting loose from the party’s [presidential nominee].

Ryan’s statements drew an immediate backlash, on Capitol Hill and at the party’s grass roots, as loyalists were stunned the top elected Republican in the country would abandon Trump at a time party leaders would normally be ramping up efforts to take back the White House.

Supporters, including some lawmakers who scolded Ryan during the private call, were equally aggrieved.

“What’s going on is our leadership panicked when there was a massive disclosure of a private conversation that Trump had 11 years ago in which he was grotesquely sexual and egotistical,” said Rep. Dana Rohrabacher of Huntington Beach, California, who called Ryan’s move cowardly.

“So, OK. That’s something of significance,” Rohrabacher said, sharing his account of the conversation in an interview afterward. But not, he went on, “as significant as the real issues that separate Hillary and Donald.”

… The choice [for GOP lawmakers] amounts to rejecting the candidate selected by voters and risk the party’s base staying home, or continuing to embrace Trump — overlooking his offensive behavior — and possibly alienate women and other swing voters who can make a difference in close House and Senate contests. …

Seeking to clamp down on speculation that the Republican National Committee was also primed to walk away from Trump, Chairman Reince Priebus told members the organization would continue to stand behind and work on behalf of the nominee through its “Victory” program, which aims to boost Republicans up and down the ticket.

Priebus offered his assurance in a private conference call Monday afternoon, according to two participants who asked not to be identified discussing internal party business.

The get-out-the-vote support is crucial to Trump, who has ignored fundamentals of campaign building and is counting almost entirely on the RNC and local parties to register voters and ensure they cast their ballots.

The move by Speaker Ryan, who has kept his distance from Trump throughout his candidacy, reflected a growing sense of panic among Republicans that their nominee was not only fated to lose the presidential race but could face the kind of landslide that would drag many GOP candidates down with him. …

Democrats could retake control of the Senate if Clinton is elected and they gain four seats…. (Her vice presidential running mate, Tim Kaine, would be positioned to break a 50-50 tie.) If Trump is elected, Democrats would need to gain five seats.

Democrats must pick up 30 House seats to take control, a number that has seemed far beyond their capacity until civil war broke out within the GOP.

Dozens of party leaders and elected officials either rescinded their endorsement of Trump or said they would not vote for him after the vulgar video surfaced. At Sunday night’s debate, Trump apologized for his remarks and characterized them as “locker room” talk that belied his true feelings.

Ryan cut his ties to Trump in a Monday morning conference call with GOP lawmakers, telling Republicans they should “do what’s best for you in your district,” according to a participant who was granted anonymity to discuss the private session.

The Wisconsin lawmaker said he would not defend Trump or campaign with him for the remainder of the election.

About a dozen members spoke up on the call, and most disagreed with the speaker.

“The best way to ensure a Republican majority in the House is to make Donald Trump the most successful candidate we can make him,” one of the participants, Rep. Kevin Cramer of North Dakota, said in an interview afterward. “The idea that running from him strengthens that, I don’t buy that strategy.” …

Trump also received a firm vote of support from his vice presidential running mate, Indiana Gov. Mike Pence, hours after the presidential hopeful took a swipe during the debate. Making the rounds on cable TV, Pence insisted he was fully behind Trump after initially refusing to defend his [offensive] comments.

“It is absolutely false to think at any time we considered dropping off this ticket,” Pence said on CNN. “I look forward to campaigning shoulder to shoulder with Donald Trump.”

He said he accepted Trump’s explanation that [his comments were] only talk:

“He said it is not something he has done,” Pence said. “He made it clear last night.”

… Gary Burgess, a 65-year-old engineer, who came to see Pence at a rally in Charlotte, N.C., said those walking away from Trump were putting their own interests first.

“A lot of the politicians are trying to protect their future of getting elected,” Burgess said, “and not necessarily protecting the future of the United States.”

Reprinted here for educational purposes only. May not be reproduced on other websites without permission from the Los Angeles Times. Visit the website at latimes .com.

1. What did Republican Speaker of the House Paul Ryan tell Republican House members in a conference call on Monday? (What did he say he was doing? What did he urge his fellow Republicans to do?)

2. How do the Los Angeles Times’ reporters describe the reaction of Republican supporters of Donald Trump?

3. What statement did Donald Trump make via Twitter in response to Speaker Ryan’s remarks?

4. a) How did some of the Republican lawmakers in on the call respond to Speaker Ryan’s decision?
b) What do you think of Rep. Rohrabacher and Cramer’s respective comments?

5. How do the reporters describe the decision Republican lawmakers have to make?

6. a) It appears the majority of Donald Trump’s supporters (the Republican voters who support him) have not pulled their support after offensive, vulgar remarks he made in 2005 were made public.  But as a leader in the Republican party, Speaker Ryan did. As the leader, did he do the right thing? Explain your answer.
b) In the 2016 elections, 34 of the 100 Senate seats are up for election, as are all 435 congressional seats. Would withdrawing support for Republican presidential nominee Donald Trump make you more or less likely to vote for your representatives who did so? Explain your answer.

7. Trump supporter Nancy E., an accountant from the Pittsburgh area, said that while she wasn’t happy with Trump’s aggressive, vulgar comments about women in 2005, she still supports him. She explained, “We knew what we were getting into with him, he is not a politician, never has been, he is a change agent in a change election.”
Is this a reasonable assertion? Explain your answer.

CHALLENGE QUESTION: The reporters describe Ryan’s decision as an “extraordinary breach in party ranks.”
Is this an accurate description? Do an internet search to determine how many times Republican and/or Democratic party leaders pulled their support for their party’s presidential nominee. Does Ryan’s move have any precedent?

Many of those offended by Donald Trump’s comments from 11 years ago watch and accept immorality, violence, vulgarity etc. from the entertainment industry. What are your thoughts about this contradiction?