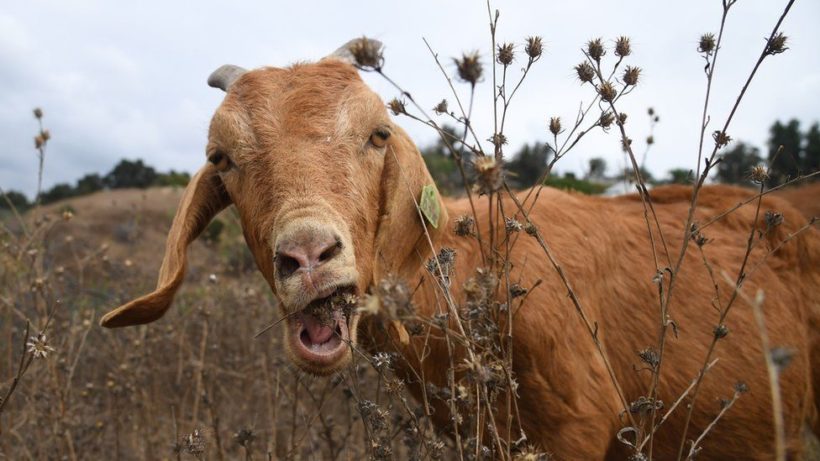 (by Omar Younis, Reuters) SIMI VALLEY, Calif.  – A herd of 500 goats helped save California’s Ronald Reagan library from a wildfire on Wednesday, after the voracious animals earlier this year ate flammable scrub surrounding the hilltop complex.

The hired goats munched through brush to create a fire break that slowed the blaze and let firefighters douse flames on Wednesday before they reached exhibits like an Air Force One jet and a piece of the Berlin Wall, a library spokeswoman said.

“We were told by one of the fire fighters that they believe that fire break made their job easier,” said Melissa Giller. “The brush only went so far, it didn’t reach the library, because the goats ate it all.”

The complex near Simi Valley is the second big southern California institution in as many days to be protected from a rash of wildfires by fire-prevention work.

Driven by gale-force winds, the Easy Fire surrounded the Reagan library on Wednesday morning, coming less than 50 feet from a hangar housing the Boeing 707 aircraft used by the former Republican president.

The site houses papers and memorabilia from Reagan’s 1981-1989 administrations, and the [beloved former president] is buried there alongside his wife Nancy.

Given the high risk of wildfires in the area, the Reagan foundation hired the goats from local company 805 Goats in May to clear around 13 acres (5 hectares) of scrub.

Morris [started the company] last November [and] charges around $1,000 per acre cleared. … 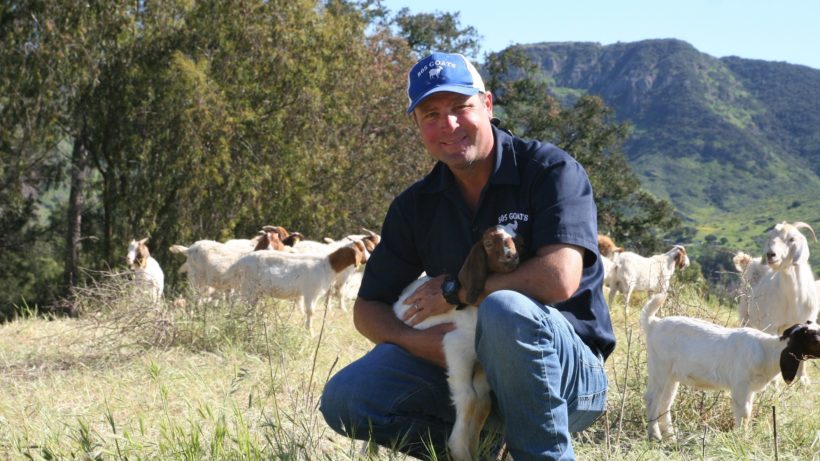 Scott Morris, of 805 Goats, with a kid as other goats graze near La Reina High School, Thousand Oaks, California in March 2019.

With California’s wildfires [wrecking havoc every year], Morris said he would need to double his herd to meet soaring demand.

By 6 p.m. the Easy Fire had burned over 1,650 acres, forced around 30,000 people to evacuate their homes, and destroyed some structures, according to fire authorities.

“All the flames are gone, all we see are charred hillsides,” said Giller. “We feel the worst is over and the Reagan library is safe.”

[Note: USA Today reports: While the 260,000-square-foot museum’s exhibits were in danger, the most important asset, the presidential papers, are stored in an underground vault-like complex designed to protect them from fire and other catastrophes].

Additional reporting by Andrew Hay in Taos, New Mexico. Published by Reuters .com on October 31, 2019. Reprinted here for educational purposes only. May not be reproduced on other websites without permission from Thompson Reuters.

2. How did the goats help save the Reagan library from the wildfire?

3. a) What did a fire fighter tell spokeswoman Melissa Giller about the goats’ work?
b) What is a fire break?

4. When and why did the Reagan foundation take the preemptive action by hiring the herd of goats?

5. Why are goats so effective in clearing brush?

6. Scott Morris, owner of 805 Goats, started his company less than a year ago. While working as a consultant on employee benefit plans, he heard a talk by Ventura County Fire Department Deputy Chief Vaughn Miller, concerned about the lack of goats for ridding the landscape of flammable vegetation. Greatly interested and seeing a need following the Woolsey Fire, Scott and his wife Emily launched 805 Goats. (The Woolsey Fire in Los Angeles and Ventura Counties ignited on November 8, 2018 and burned 96,949 acres of land. The fire destroyed 1,643 structures, killed three people, and prompted the evacuation of more than 295,000 people.)
How does Scott’s story inspire/encourage you?

Watch an Oct. 31 Reuters news report on the fires: