The real reasons for the California wildfires

Posted on October 31, 2019 in Thursday's Editorial

(from the New York Post Editorial Board) – Between the raging wildfires and power blackouts, California is now offering an abject lesson in the perils of wishful thinking. The state’s leaders may blame climate change or big utility companies, but in reality it’s their own fault.

By Monday morning, Pacific Gas and Electric (PG&E) had broken its record for households blacked out — the company’s pre-emptive effort to avoid the downed live power lines that can start fires. Yet high (but not record-setting) wind gusts are still triggering wildfires, and not just in PG&E’s service area.

Why have 10 of the state’s 20 largest, most deadly fires ever occurred in the last decade? Because its forests are now twice as dense as they were 150 years ago — when the population was a fraction of today’s.

Behind that unnatural density: state and federal rules that make it nearly impossible (and insanely expensive) to lay a finger on any of this precious overgrowth.

Green sentiment [extreme environmental policies] has beaten back the timber industry, which might have put life-saving access roads into wild areas. It has prevented controlled burns (for fear of disrupting animal habitats) and barred even minor brush-clearing programs. 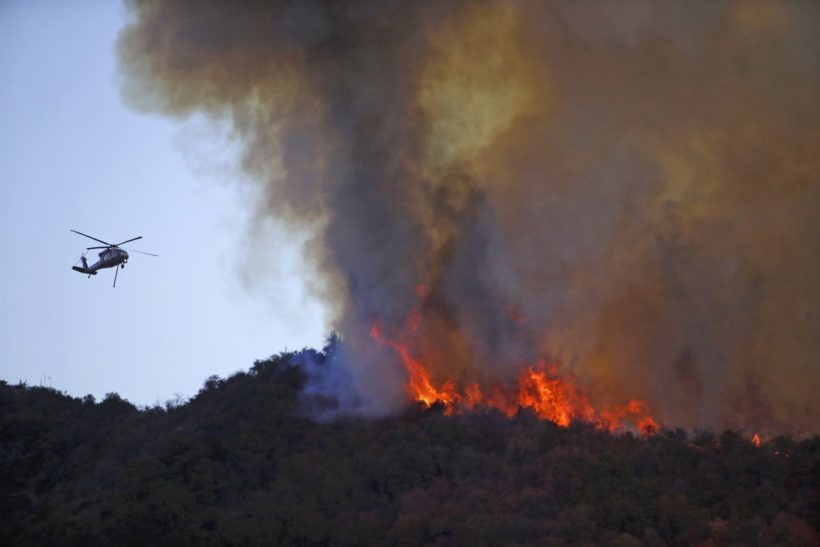 A helicopter prepares to drop water as the Getty fire burns on Mandeville Canyon on Monday, Oct. 28, 2019, in Los Angeles.

And since it’ll be years before the utility can secure its lines against high winds, its customers must now expect rolling blackouts every fall when the powerful, hot “El Diablo” winds roll in.

President Trump had it right last summer: “There is no reason for these massive, deadly and costly forest fires in California except that forest management is so poor.”

On his final day in office, Democratic Gov. Jerry Brown admitted as much by quietly signing bills removing impediments to “controlled burns” and allotting $190 million a year to “improve forest health and fire prevention.”

But that’s not remotely enough: California’s Forestry Department would like to double its amount of tree and brush thinning over the next five years — but isn’t sure it can. Its deputy director, Helge Eng, sees “a significant public education campaign ahead of us as foresters to get the public to understand” how dangerously unnatural it is to not thin out forests.

Published October 28, 2019 at NYPost .com. Reprinted here October 31, 2019 for educational purposes only. May not be reproduced on other websites without permission from the New York Post.

1. The purpose of an editorial/commentary is to explain, persuade, warn, criticize, entertain, praise or answer. What do you think is the purpose of the NY Post editorial? Explain your answer.

3. Do you think the editors make a good case for the assertion that California’s wildfires are the fault of state and federal policies? Explain your answer.

CHALLENGE: Ask a parent to read the article and “Background” and discuss the answers.

The following is excerpted from a commentary at Forbes:

This is California’s big secret:

It’s not climate change that’s burning up the forests, killing people, and destroying hundreds of homes; it’s decades of environmental mismanagement that has created a tinderbox of unharvested timber, dead trees, and thick underbrush.

This dangerous situation attracted attention from President Donald Trump who, during the height of California’s wildfires last year insisted that

“There is no reason for these massive, deadly and costly forest fires in California except that forest management is so poor.”

The irony is that forest management is so bad on public lands that a new report, ordered by the California legislature in 2010, shows that the portion of California’s National Forests protected from timber harvesting is now a net contributor to atmospheric carbon dioxide due to fires and trees killed by insects and disease.

The California forest report draft concludes by observing that the “Current flux [of CO2] may not be sustainable without forest management!” while citing the challenge of “Aging of forests on federal lands.”

Unlike much of the American South and East, California has a distinct wet season, with Pacific storms rolling in by November or December and wrapping up by March. In even the wettest years (2016-17 was the wettest in 122 years) much of California is bone-dry by late fall. Thus, it isn’t climate change that sets the conditions for fires—it’s California’s natural weather pattern. Comparing acres burned in wildfires to weather and tree harvest data, there appears to be little link to climate—but a big connection to the growing forest fuel load, especially on government land.

Which brings us back to policy. If federal and state environmental policies continue to make it difficult and costly to harvest timber and manage the fuel load, then the wildfires will continue and they will be bigger and deadlier. This will, in due course, cause some politicians to blame the fires on climate change.

In the meantime, the timber harvest infrastructure is less than one-third of what it was 30 years ago, meaning that even if politicians were sincere in wanting to manage the public forests, there few people remaining to manage them.

The excerpt above is from a commentary by Chuck DeVore published at Forbes .com on Feb. 25, 2019. Mr. DeVore is the VP of the Texas Public Policy Foundation VP and aformer California legislator.