Battle of the Bulge: One of the bloodiest battles of WWII 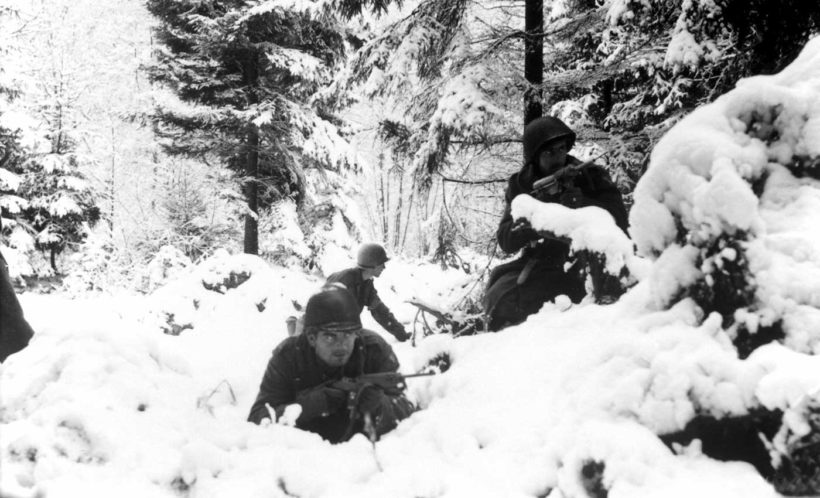 (from U.S. Army Center of Military History) — In late 1944, during the wake of the Allied forces’ successful D-Day invasion of Normandy, France, it seemed as if the Second World War was all but over. On Dec. 16, with the onset of winter, the German army launched a counteroffensive that was intended to cut through the Allied forces in a manner that would turn the tide of the war in Hitler’s favor. The battle that ensued is known historically as the Battle of the Bulge. The courage and fortitude of the American Soldier was tested against great adversity. Nevertheless, the quality of his response ultimately meant the victory of freedom over tyranny.

Early on the misty winter morning of Dec. 16, 1944, more than 200,000 German troops and nearly 1,000 tanks launched Adolf Hitler’s last bid to reverse the ebb in his fortunes that had begun when Allied troops landed in France on D-Day. Seeking to drive to the coast of the English Channel and split the Allied armies as they had done in May 1940, the Germans struck in the Ardennes Forest, a 75-mile stretch of the front characterized by dense woods and few roads, held by four inexperienced and battle-worn American divisions stationed there for rest and seasoning.

After a day of hard fighting, the Germans broke through the American front, surrounding most of an infantry division, seizing key crossroads, and advancing their spearheads toward the Meuse River, creating the projection that gave the battle its name.

Stories spread of the massacre of Soldiers and civilians at Malmedy and Stavelot, of paratroopers dropping behind the lines, and of English-speaking German soldiers, disguised as Americans, capturing critical bridges, cutting communications lines, and spreading rumors. For those who had lived through 1940, the picture was all too familiar. Belgian townspeople put away their Allied flags and brought out their swastikas. Police in Paris enforced an all-night curfew. British veterans waited nervously to see how the Americans would react to a full-scale German offensive, and British generals quietly acted to safeguard the Meuse River’s crossings. Even American civilians, who had thought final victory was near were sobered by the Nazi onslaught.

But this was not 1940. The supreme Allied commander, Gen. Dwight D. Eisenhower rushed reinforcements to hold the shoulders of the German penetration. Within days, Lt. Gen. George S. Patton Jr. had turned his Third U.S. Army to the north and was counterattacking against the German flank.

But the story of the Battle of the Bulge is above all the story of American Soldiers. Often isolated and unaware of the overall picture, they did their part to slow the Nazi advance, whether by delaying armored spearheads with obstinate defenses of vital crossroads, moving or burning critical gasoline stocks to keep them from the fuel-hungry German tanks, or coming up with questions on arcane Americana to stump possible Nazi infiltrators.

At the critical road junctions of St. Vith and Bastogne, American tankers and paratroopers fought off repeated attacks, and when the acting commander of the 101st Airborne Division in Bastogne was summoned by his German adversary to surrender, he simply responded, “Nuts!”

Within days, Patton’s Third Army had relieved Bastogne, and to the north, the 2nd U.S. Armored Division stopped enemy tanks short of the Meuse River on Christmas. Through January, American troops, often wading through deep snow drifts, attacked the sides of the shrinking bulge until they had restored the front and set the stage for the final drive to victory (on Jan. 25, 1945).

Never again would Hitler be able to launch an offensive in the west on such a scale. An admiring British Prime Minister Sir Winston Churchill stated,

“This is undoubtedly the greatest American battle of the war and will, I believe, be regarded as an ever-famous American victory.”

Indeed, in terms of participation and losses, the Battle of the Bulge is arguably the greatest battle in American military history.

Courtesy of the U.S. Army Battle of the Bulge page. 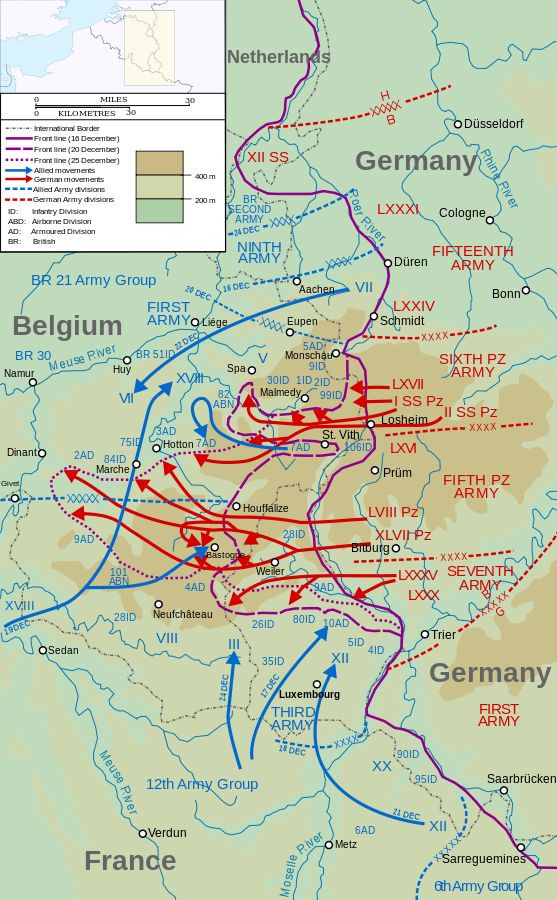 1. How long did the Battle of the Bulge last?

2. What was Hitler’s aim for what became known as the Battle of the Bulge?

3. How did the Germans use their English-speaking soldiers?

4. a) Who was the supreme Allied commander in Europe?
b) Who led the Third U.S. Army?

5. What did American soldiers do to slow the Nazi advance?

7. Consider the information found in the links, as well as the videos. What impresses/inspires you most about U.S. (and Allied) troops beating the Nazis in this campaign?

The Battle of the Bulge:

One of the most gallant combat actions in the Battle of the Bulge was that of an intelligence and reconnaissance (I&R) platoon’s defense near Lanzerath, Belgium, on the first day of the battle. For their exploits, the I&R Platoon, 394th Infantry Regiment, 99th Infantry Division, would later become “the most heavily decorated platoon for a single (enemy engagement) in World War II.” The 18 men of the I&R platoon had inflicted between 400 and 500 casualties, decimating an entire battalion of the German 3d Parachute Division.

Platoon leader Lyle Bouck later said “I felt like what I did was a failure.” because he and his men were ultimately captured – despite the fact that they had prevented a force of over 5,000 Germans from advancing for eight crucial hours.  Read an overview at: nationalww2museum.org and more details at fas.org.

Casualty estimates for the battle vary:

Universal News released this clip on Jan. 11, 1945, reporting on the Battle of the Bulge in Europe.:

Universal News released this clip on Jan. 29, 1945, reporting on the Battle of the Bulge in Europe: