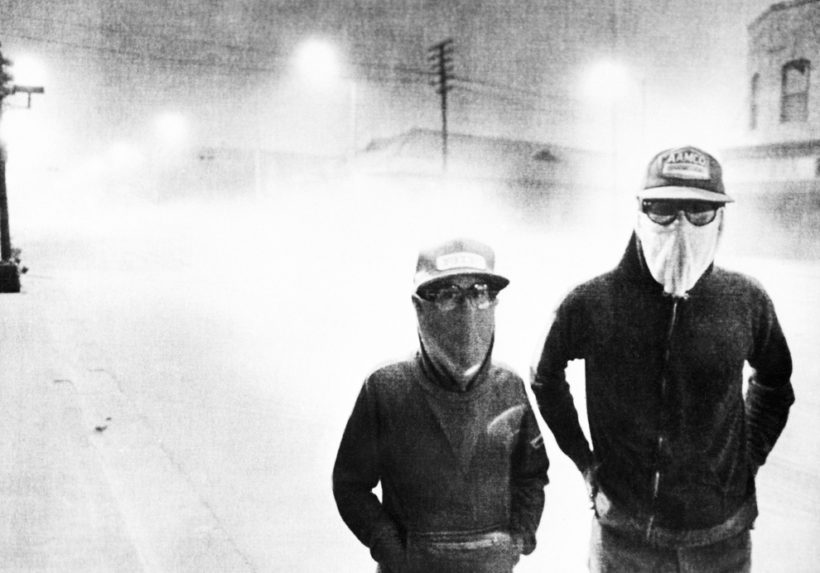 The streets of Yakima, Washington are dark at 3:00 PM after an eruption [90 miles away] at Mount St. Helens on May 18, 1980. Light gray volcanic ash covered the streets and passersby wore masks to avoid breathing the ash. (AP Photo)

(by Michale Casey, CBS News) – Before Mount St. Helen’s [erupted] 35 years ago [May 18th], Spirit Lake was a popular tourist destination in Washington state, a place dotted with campsites where visitors came to enjoy its crystal clear waters that reached depths of 200 feet.

Within hours of the 1980 eruption, the lake disappeared under layers of volcanic ash, tree limbs and mud. The blast – the deadliest and most economically destructive volcanic eruption in U.S. history – caused an avalanche that came crashing down onto the lake, displacing the water to such a degree that it produced huge waves that washed across the mountain landscape. The landslide raised the lakebed 200 feet.

“That landslide completely buried the old lake,” University of Washington Tacoma’s Jim Gawel, who has spent the past decade studying the lake, told CBS News. “You basically buried all the old sediments, knocked down all the old trees and denuded the landscape. So you kind of started from scratch.” It seemed as if one of the region’s great natural landmarks – a lake by some accounts 4,000 years old – was gone forever. But nature had other ideas. Because runoff still drained into the same spot, a new lake began forming.

Today, visitors see a complete new lake – [though] covering a much wider area and shallower, which has been a boon (benefit) to aquatic life.

Much like the lake, the hundreds of square miles of century-old forests destroyed by the eruption have come back, in many ways richer and surprisingly different than before. Such a recovery would have seemed unfathomable for anyone who witnessed the destruction on May 18, 1980 that was triggered by a 5.2-magnitude earthquake at 8:32 a.m. The images are from the same forest site in 1980 after the Mount St. Helens eruption, at left, and in 2013, right. (Photos: Joe Antos and Dylan Fischer)

Soon after, the volcano’s northern bulge slid away, causing the biggest debris avalanche in recorded history. The landslide was soon followed by a lateral [sideways] blast that sent hot ash and debris hurdling down the mountain at 300 miles an hour, scorching and toppling everything with 230 square miles. It also sent ash and gas 15 miles into the air in just 15 minutes. Over the next nine hours, prevailing winds sent 520 million tons of ash across the state – darkening an area as far away as Spokane, Washington, more than 250 miles to the northeast. In this 1980 photo, a worker at an auto dealership in Moscow, Idaho used a blower to remove ash from the eruption of Mount St. Helens [more than 350 miles away] from a car. (AP Photo/Moscow-Pullman Daily News)

Fifty-seven people lost their lives in the eruption. The area’s abundant wildlife was also devastated. Some 7,000 big game animals and 12 million juvenile salmon were lost. No trees from a dense forest were left standing within 6 miles of the summit.

There is no question the avalanches and eruption transformed the landscape – forming new lakes and ponds, filling in valleys, covering much of the forest floor with ash. But out of the devastation has emerged a new ecosystem, challenging what we know about the ability of landscapes to recover after a disaster and is serving a model for other parts of the world like Chile and Indonesia where volcanoes have charred whole ecosystems.

Charlie Crisafulli, an ecologist with the U.S. Forest Service Pacific Northwest Research Station, was among the first scientists to arrive in the weeks after the disaster. Flying towards the blast site, he recalled seeing green forest give way to miles and miles of “gray, strewn with downed trees.”

“The initial impression was that nothing or few things would survive,” Crisafulli recalled. “It looked like everything had been destroyed, that all vestiges of life had been snuffed out.” A camper containing two victims of the Mount St. Helens eruption sits amidst the gray landscape about 8 miles from the mountain. Marks in the volcanic ash in front of and behind the camper were left by a helicopter and a seacher who found the victims on Tuesday, May 20, 1980. (AP Photo)

But on the ground, he saw the first signs of life. Ants scurried about and pocket gophers dug through the ash, burrowing in search of food. Fallen trees provided homes for insects and infused much-needed nutrients into the parched system. Further up the mountain, many alpine lakes and their aquatic systems came away unscathed because they had been protected from the ash by ice and snow.

Oregon State’s Don Zobel, who also arrived weeks after the eruption to study plant life, found a forest floor covered in several inches of tephra, fragments of volcanic ash and rock that was gray in color and looked like a concrete floor.

Many small plants, moss and shrubs had been buried alive, but like Crisafulli, Zobel saw signs of life in the first year. Species of moss found in the wake of wildfires thrived. So did Rubus lasiococcus or dwarf bramble, which was able to use vine-like runners to spread across the tephra.

“Those runners moved out through the cracks and spread over the tephra in a hurry,” he said, adding that iarella unifoliata or foamflower and Erythronium montanum or avalanche lily also did well. This image was taken June 8, 1980, of avalanche lilies growing through blast deposits from the May 18, 1980 eruption of Mount St. Helens, about 10 miles northwest of the volcano. (Photo: USGS)

These plants and animals were what scientists call biological legacies, species that determine the pace and direction of the new ecosystem. And because there were some survivors already there, they helped jumpstart the desolate landscape.

“In this enormous sea of destruction, we had this archipelago of survivorship. These islands – from a single individual plant to entire lake – turned out to be incredibly important,” Crisafulli said. “One of the biggest challenges for plants and animals to reestablish has to do with dispersal. So if you have survivors deeply embedded in a disturbed area, that kind of negates the limits of long distance dispersal.”

Soon after the blast, Congress created the 110,000-acre Mount St. Helens National Volcanic Monument. That gave scientists a chance to watch nature proceed at its own course undisturbed by manmade activities like logging….

They were in for plenty of surprises – especially in places where the landscape was dramatically transformed. These were areas buried by the landslides, or where the old growth forests, which had defined the ecosystem for hundreds of years, were now gone. …

Vast areas once dominated by towering trees were now open to sunlight, giving a whole host of plants, insects, birds and small mammals a chance set up shop. And with huge stretches covered in volcanic ash lacking in minerals needed for plant growth, those that could draw the nitrogen from the air and then store it in their roots – called nitrogen fixation – had a distinct advantage. A white-crowned sparrow was one of the bird species that took advantage of the open spaces created by the Moung St. Helens eruption to thrive. (Photo: Charlie Crisafulli)

Thus, some of the early colonizers in these desolate patches were plants like prairie lupine, famous for their purple flowers, fireweed and pearly everlasting and alder shrubs. At the same time, the conifer [evergreen] forest haven’t come back, replaced by deciduous forest dominated by alder trees, which fix their own nitrogen. Sitka willow took hold in areas of high moisture, like stream embankments.

These emerging forest attracted ants and grasshoppers and generalist birds like American robins – attracted to the open spaces. Other newcomers were horned larks and savannah sparrows alongside gophers and deer mice.

More recently, a new chapter in this story has emerged as many of the trees in these new forests reach the point where they are creating a canopy, Crisafulli said. That has brought changes in light, soil moisture and wind – and with it a host of new species.

Out goes the fireweed and in come the sword fern, lady fern and Lily of the valley. The ants fall back, replaced by leaf-eating insects and rove beetles. The gophers find the new world less suitable, replaced by chipmunks, ground squirrels, voles and shrews. Weasels also make their appearance.

Elk, too, arrived to take advantage of an explosion of new plant growth, increasing to record numbers. This thickening forest also impacts birds, with sparrows replaced by American yellow warblers and willow flycatchers, among others.

Spirit Lake, too, has benefited from the loss of the huge trees that once cast a shadow over it. Combined with its shallower depth, Gawel said this has resulted in a “warmer, more productive lake” when compared to alpine lakes in the region.

That has resulted in more aquatic plant growth, he said, more insects and bigger fish – in this case rainbow trout that were introduced soon after the eruption. Salamanders, which are abundant in most alpine lakes in the region, are scarcer here because of the fish. …

The lake has also benefited from downed trees from the blast that to this day float from one end to the other depending on the wind – covering a fifth of the lake and serving as a hotbed for insects.

“What we are finding is that logs are creating nutrients by themselves. There is a biofilm that grows on the logs and the logs are constantly feeding the biofilm into the lake. You get this floating ecosystem.”

Not all places, however, have thrived. In the four sites Zobel studies further from the crater, where tree loss was less, the plant growth has dropped off. There are only about quarter to a half of the mosses that were there before the blast. In places covered with six inches of tephra, herbaceous plants are only 30 to 60 percent of what they once were. …

But overall, Crisafulli and others would argue the areas hit by the blast are doing just fine – more diverse and species-rich than the old growth forest that dominated for so long and healthy by most standards. Invasive species, a fear early on, have not proven to be a problem. …

PLEASE NOTE:  This is the last Daily News Article of the school year.  Posting will resume at the end of the summer.

2. What effect did the eruption have on the surrounding area in the immediate aftermath? Be specific.

3. a) What was shocking to people about Spirit Lake after it was buried by a landslide caused by the eruption, according to Jim Gawel of University of Washington Tacoma, who has spent the past decade studying Spirit Lake?
b) Does this information affect your view of God’s role in the universe? Explain your answer.

4. What has happened to the area following the destruction caused by the eruption of Mount St. Helens?

5. a) Describe the new flora and fauna that emerged after the eruption. (Flora is plant life; fauna refers to animals)
b) How has Spirit Lake benefitted from the loss of huge trees surrounding the lake?

6. Now, 35 years later, how has the growth of new trees changed the area again? In this May 17, 1980 photo, 30-year old vulcanologist David Johnston is shown in the evening at his camp near what is now known as Johnston Ridge near Mount St. Helens. At 8:32 a.m. the next morning, Johnston radioed a message to the USGS headquarters: “Vancouver, Vancouver, this is it!”, shortly before he was killed by the massive eruption of the volcano that also killed 56 others. (AP Photo/USGS Cascades Volcano Observatory, Harry Glicken)

Read an explanation of the Mount St. Helens eruption: geology.sdsu.edu