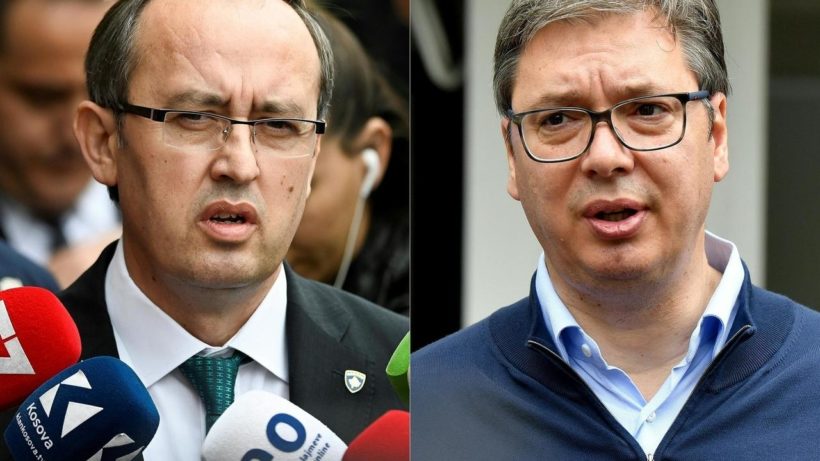 (AP at CBS News) — President Trump announced Friday that Serbia and Kosovo have normalized economic ties as part of U.S.-brokered talks that include Belgrade moving its Israeli embassy to Jerusalem, and Israel and Kosovo agreeing to mutual recognition.

[The announcement and a multi-faceted agreement between the two countries followed months of diplomatic talks led by Richard Grenell, the U.S. ambassador to Germany, who was named special envoy for Serbia-Kosovo relations by President Trump in 2019.  On January 2020, due to U.S. mediation, Serbia and Kosovo agreed to restore flights between their capitals for the first time in more than two decades].

On Friday, after two days of meetings with Trump administration officials in Washington, Serbian President Aleksandar Vucic and Kosovo’s Prime Minister Avdullah Hoti agreed to cooperate on a range of economic fronts to attract investment and create jobs. The announcement provided Mr. Trump with a diplomatic win ahead of the November presidential election and furthers his administration’s push to improve Israel’s international standing.

“I’m pleased to announce a truly historic commitment,” President Trump said in the Oval Office, standing alongside the two leaders, who signed an economic cooperation agreement. “Serbia and Kosovo have each committed to economic normalization.”

“After a violent and tragic history and years of failed negotiations, my administration proposed a new way of bridging the divide. By focusing on job creation and economic growth, the two countries were able to reach a major breakthrough,” the president said.  …..

Kosovo’s Parliament declared independence from Serbia in 2008, nine years after NATO conducted a 78-day airstrike campaign against Serbia to stop a bloody crackdown against ethnic Albanians in Kosovo. 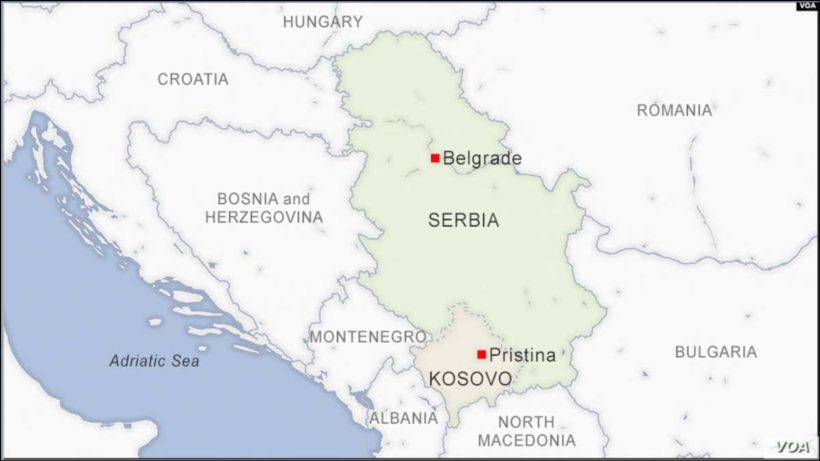 Most Western nations have recognized Kosovo’s independence, but Serbia and its allies Russia and China [have refused to do so, thereby blocking Kosovo from becoming a UN member]. The ongoing deadlock and Serbia’s unwillingness to recognize Kosovo have kept tensions simmering and prevented full stabilization of the Balkan region after the bloody wars in the 1990s.

“These were difficult talks for us, but I’m truly satisfied,” Vucic told Serbian reporters in Washington.

He stressed that the economic agreement does not include “mutual recognition” between Serbia and Kosovo. [However, under the terms of the agreements signed, for a period of one year as the economic agreements are implemented, Serbia will suspend its efforts to encourage other states to either not recognize Kosovo or to revoke existing recognition. In return, Kosovo will not apply for new membership in international organizations for the same time period].  Vucic hailed the talks as a big victory for Serbia and a step toward closer ties with the U.S. Despite officially seeking membership in the European Union, Serbia has been forging close political, economic and military ties with Russia and China.

Hoti described the economic cooperation as a “huge step forward” in the relationship and said the two leaders were committed to working together.

Serbia and Kosovo have already OK’d air, rail and transit agreements, including one that would clear the way for the first flight between Pristina and Belgrade in 21 years. [The agreement also includes measures to improve transport infrastructure and border crossings, cut trade tariffs and share energy and water resources].

The new agreement comprises many more areas of economic cooperation. Business leaders in both nations have been frustrated and have been talking among themselves about ways to foster investment outside of the ongoing political talks brokered by the EU.

2. Why is any agreement between the two countries historic? Be specific.

3. a) Define normalize and broker as used in this article.
b) What have the two countries agreed to do as they normalize economic ties?

4. After years of others making no progress in brokering ties between the two countries, what different approach to negotiations did President Trump direct his team to take?

5. Biagio Carrano (who appears to be no fan of Donald Trump) wrote about the U.S.-brokered agreement between Kosovo and Serbia at SerbianMonitor .com on Sept. 6, 2020:

This was an act of strength and authority on the part of the Americans, who pushed Serbia and Kosovo, to accept commitments and impositions they had avoided for decades. …

China has suffered a decisive setback since Serbia will be forced to renounce the 5G developed by Huawei, effectively annulling all the most meaningful developments, in terms of control and data analysis, of the agreements signed on the subject by Xi Jinping during his visit to Serbia of June 2016.

Russia finds itself displaced with respect to its geopolitical strategy in the Balkans by a single sentence of the agreement: “the parties will diversify their energy sources”, that is, they will not have to rely on TurkStream, which leg in the Balkans (the oil pipeline is not surprisingly named Tesla) was to carry Russian gas from Greece to North Macedonia, Serbia and Hungary, reaching Austria. Richard Grenell, Trump’s special envoy for Serbia and Kosovo, had already been categorical with (Serbian President) Vucic in previous meetings regarding this matter.

Turkey, historical sponsor of Kosovars and Albanian irredentists, must accept the opening of diplomatic relations between Kosovo and Israel. Serbia, on the other hand, has been forced to go further and move the diplomatic representation from Tel Aviv to Jerusalem, weakening the European position of “two peoples, two states”, definitively renouncing the historical affinity with the Palestinian cause and aligning itself even more with the United Arab Emirates, which signed the peace agreement with Israel just a week ago.

…[Israel] not only collects recognition from Kosovo, the Serbian diplomatic seat relocated in Jerusalem, the return of Jewish properties stolen during the Holocaust, but even an entire point is dedicated to the commitment that Serbia and Kosovo must demonstrate against Hezbollah in order not to have the Shiite organization operate in their territories.

Meanwhile, several U.S. media outlets have dismissed the agreement, saying its not a real agreement and will have no real impact on the region, or that “Experts, including many former U.S. officials who spent years working in the Balkans, say avoiding the politics is unrealistic”.

What do you think: should the Trump administration’s attempts to establish ties between long-time enemies Serbia and Kosovo be commended (as Mr. Carrano does) or dismissed as not really significant or historic? Explain your answer. (Ask a parent or grandparent: what do you think of the success or unimportance of the agreement? Please explain your answer.)

During a press conference following the historic agreement, which President Trump held in the White House with the Prime Minister of Kosovo and the President of Serbia, several Trump officials spoke: (see videos under “Resources” below)

“We brought together — through the hard work of great diplomats, primarily led by Ric Grenell, acting at the President’s direction — Serbia and Kosovo. And they’ve normalized their economic relations…. The Serbia-Kosovo conflict has gone on for decades. They’ve been stuck, unable to move forward, for many, many years.”

And the President, sometime ago, decided that we try — we needed to try something creative and try something new, break the deadlock and bring — try to move forward with the peace process with Serbia and Kosovo. …

And what President Trump said to me was, “They’re fighting politically about everything. Why don’t we give it a try to do something different and creative? Why not try to do economics first and let the politics fall — follow the economics?” That proved to actually be a formula that they were eager for. No one had been talking to them about this.

I ask you [reporters] to look at this agreement and see all of the details that have been hard-fought negotiated that will move both economies and the entire region forward. This is economic normalization….

…..   The last thing I’ll say before we turn it over to Jared: The people of Serbia and the people of Kosovo are ecstatic about this agreement and are very thankful that there was an outside administration to look at this situation and not do the typical political thing. If we would have done the typical political thing and listened to all of the really smart people at NGOs and think tanks here in Washington, D.C., we would not have this agreement.

As part of the agreements, Serbia and Kosovo also:

Watch Serbian President Aleksandar Vucic and Kosovar Prime Minister Avdullah Hoti speak at a press conference in the Oval Office on September 4 before signing the historic economic agreement between their two countries:

Watch Richard Grenell, Special Presidential Envoy for Serbia and Kosovo Peace Negotiations, speak about the significance of the agreement: